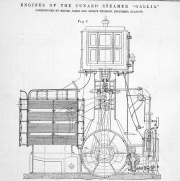 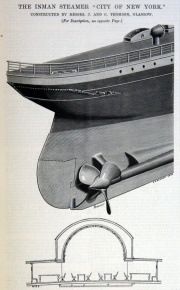 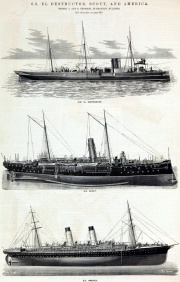 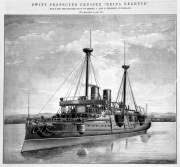 1890. The SS City of Paris owned by Inman and International Co. 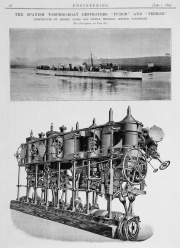 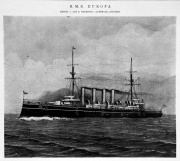 James and George Thomson of Finnieston Street and of Clydebank, Glasgow.

1845 Firm was founded by the brothers James and George Thomson, with engineering works in Finnieston Street.

1847 Established their Glasgow foundry in Anderston. The engine and boiler shops occupied an area of 2½ acres; the design largely copied that of the old Vulcan and Lancefield Works of Robert Napier; the hoisting and handling of the pieces of machinery was performed almost entirely by manual labour; the haulage of machinery relied on large gangs of men and boys.

The first marine engine made at Clydebank Foundry was a single steeple engine of 50 H.P. for the West Highland trade of G. and J. Burns.

1851 The Thomson Brothers opened a shipyard at Cessnock, calling it J. and G. Thomson after their Glasgow foundry. The old building yard at Govan occupied an area of about 3 acres. Both works, when fully engaged, employed about 1,500.

The first vessel built in the Govan yard was the "Mountaineer," for the West Highland trade of David Hutcheson and Co.

1852 Launched their first ship, the Jackal. They quickly established a reputation for building prestigious passenger ships. Constructed about forty steamers, principally for the Atlantic mail service, for Cunard and G. and J. Burns.

1854 Built the Jura for Cunard

1857 Built the Australasian and the Calabria for Cunard.

1863 Built an armour-clad steam-ram, said to be for the "Emperor of China", widely understood to refer to the American Confederate forces[2]

1863 A dispute with the Government over the build quality of the Pampero resulted in the ship being impounded. [3]

1865 See 1865 Clyde Shipbuilders for detail of the tonnage produced.

1870s The company moved to the Barns o' Clyde (later re-named Clydebank) near the village of Dalmuir, about seven miles west of Glasgow, in 1871 when the Clyde Trust needed additional dock accommodation. The location, at the confluence of the River Clyde, with the tributary River Cart at Newshot Isle, allowed very large ships to be launched. Despite severe financial difficulties the company developed a reputation based on engineering quality and innovation. The building yard and engine works came to occupy an area of about 50 acres, and when fully engaged employed from 3,000 to 4,000 men. The workshops were high and open, with ample daylight and electric light; powerful overhead travelling cranes, and a complete system of hydraulic machinery was installed.

1874 Built the Bothnia for Cunard.

1880s The yard began the changeover from iron to steel with steamers, coastal passenger ships and paddlers for Scottish and Brazilian companies. One of many record breaking ships was built by the yard in 1884: America, a brig-rigged twin funnelled vessel that won the Blue Riband for a few months. The yard also produced a number of other ships which captured the Blue Riband too.

1883 New engine works at Clydebank was complete which also created the town of Clydebank. When in full operation the shipyard and engine shops employed over 4,000 men.

1888 Exhibitor at the Glasgow Exhibition.

1889 Friesland was built for Red Star.

1890s The beginnings of the yard's outstanding reputation for building short-sea packets began in the early 1890s with eight being built within six months. The yard also continued making liners and the American Presidential yacht Mayflower.

1891 Annual dinner held at the Bath Hotel, Glasgow with James R. Thomson presiding who refers to being in charge of the company for the past 25 years. [5]

1897 Ogden Goelet ordered a luxurious steam yacht designed by G. L. Watson and constructed by J. and G. Thomson on the Clyde. His brother Robert had an identical yacht made at the same time by the same designer and constructor. Ogden died on the yacht in Cowes shortly after it was delivered. The vessel was sold to the US Navy and became USS Mayflower (PY-1). The sister ship for brother Robert later became USS Nahma (SP-771).[7]

1897 A slump in orders led to the Thomson family selling the yard to a consortium, which renamed the yard as the Clydebank Engineering and Shipbuilding Co. A further dozen ships were completed under this new name.