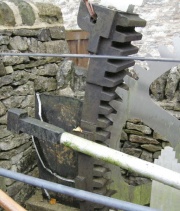 1768 Born the son of Joseph Hewes and his wife Mary Cheek, she being the daughter of Thomas Cheek, a builder latterly of Mile End, Stepney, after whom Thomas was named (Thomas was also guild-apprenticed to his grandfather in 1782 in the Plaisterers' Company of the City of London). Joseph Hewes married Mary Cheek in 1753, and they lived out their married lives in Walthamstow, then a village in Essex, where Joseph was a farmer (he left a PCC will in 1803 naming his son Thomas Cheek Hewes, among others).

1790s - 1800s Maker of water wheels, millwork and spinning machinery; responsible for the first governor fitted to a water wheel.

1797 Installed a Boulton and Watt engine for McConnel and Kennedy in Manchester.[2]

1824 Employed 150 workmen, mostly on machinery but 40 were on heavy mill work; he erected entire fire-proof mills which he built in Lancashire and Yorkshire and also further afield.

Partnership with Henry Wren as Hewes and Wren.

1832 Advertisement: ALL Persons who have any DEMANDS upon the Estate of the late THOMAS CHEEK HEWES Esquire, are requested to send the particulars thereof to the Office of Lonsdale and Thomas, Solicitors. King-street.' [7]

1849 Creditors. '...made in a cause Hewes versus Wood, the creditors of Thomas Cheek Hewes, late of Manchester, in the county of Lancaster, Civil Engineer, deceased (who died in the month of January 1832)...'[8]

1832 His will (PCC 1832) names among others his late brother Joseph Hewes, who succeeded his father as farmer at Walthamstow, dying in 1826

'THE LATE MR. HEWES. The late Thomas Cheek Hewes, Esq., of Manchester, whose death was recently announced in this paper, will long be remembered with regret. The public has lost one of its best and most useful members, not merely as a man of science, but as a man abounding in the best feelings of our nature. His eminent talents in the various branches of mechanical art to which he devoted himself, are too well known in this county and neighbourhood, as well as in some of the more distant counties of England, and in Scotland and Ireland, to need any lengthened notice here, but it would not be doing justice to the memory of such a man to consign his remains to the tomb without same faint tribute to the master mind, which they so recently embodied.

'Mr. Hewes was born near Beckenham, in Kent, on the 23d. of February 1768. He imbibed a love of mechanics at a very early age, from the circumstance of a corn mill being situated near to his father's residence. The mill was turned by water, and young Hewes took great interest in observing the mechanical force, and the mode of applying that element of power. At the age of 24 he came to Manchester, where his talents were quickly appreciated, and after some time he was enabled to establish himself as a machine maker and general millwright. One of the favourite objects of his study, was the introduction of iron, under divers modifications and arrangements, as a substitute for wood, and his exertions to that end were remarkably bold and successful. To a valuable knowledge of mechanics in general, and of carpentry, he united he united a particular acquaintance with hydrostatics, and had studied with most satisfactory results the effects of currents of wind as means of power. In the construction of every description of every description of mill geering, as well as of spinning and other machines, he evinced abilities of the highest class, and in the planning and erecting of mills of various kinds, as well as other similar works of magnitude, he displayed a skill and soundness of judgement that would alone have been sufficient to stamp his name in the remembrance of practical men. But his great improvements in water wheels, and especially the introduction of the suspension wheel, which he brought to its present state of perfection, (and of which he erected a great number in different parts of the United Kingdom,) will hand down the name of "Hewes" to a distant period, as that man whose scientific and practical acquirements have been of the greatest usefulness to his country. In short as the name of "Watt" is associated with the steam engine, so with similar excellence is the name of "Hewes” associated with the water wheel.

'To speak of him as a man. It was difficult to know Mr. Hewes without feeling towards him something more than respect. With the highest sense of honour, and the most scrupulous integrity, he was frank, generous, and obliging, dull of truth and benevolence, in the purest sense of' the word; - his heart and hand were always open, whilst his numerous acts of charity and kindness were rendered more grateful by their spontaneousness, and the entire absence of ostentation by which they were distinguished.

'He prosecuted a successful business with the greatest honour to himself, and to the satisfaction of those by whom he was consulted or employed; and died January 25th. 1832, in the 64th year of his age.- Manchester Guardian.'

Thomas Hewes' most important development was the 'suspension' waterwheel. The principle is familiar to us in the bicycle wheel. Hewes' wheels had cast iron rims and axles connected by slender wrought iron spokes, with the power taken from gear teeth at the rim. The original proposal almost certainly came from William Strutt.

The earliest recorded example was an enormous (40 ft dia) wheel at George Allman's Overton Mill (Co. Cork), of which only the axle and its bearing pedestals are known to survive, in the ruins of the mill. The significance of the Overton Mill wheel has only recently come to be appreciated, and is well-described by Dr. Rynne in 'Technological Innovation in the Early 19th Century Irish Cotton Industry'[10]. The achievement was quite remarkable, in terms of both the advanced nature of the design and the hurdles which had to be overcome in constructing it. In the context of the date, c.1802, it was a staggering accomplishment.

Although the Overton wheel is the earliest known example, it seems probable that a less ambitious prototype would have been built closer to Hewes' base in Manchester. If not, then George Allman's boldness and confidence in adopting such radical technology is all the more impressive. However, such wheels seem to have attracted little attention in the contemporary press, so we may never know.

Large examples of later suspension-type waterwheels from other makers can still be seen, and study of these reveals some of the obstacles to be overcome. Consider, for example, the rim of a 40 ft diameter wheel, with its internal cast iron gear teeth, and observe that the whole periphery must run truly, with no more deviation than a fraction of an inch, for it must mesh satisfactorily with its driven pinion. Consider further that this great wheel rim is located and secured by a relatively small number of long, slender iron rods, and imagine the difficulties in getting the wheel to run true. A further enormous challenge would haven arise when erecting the wheel. Before the last segment of the rim was secured in place - conferring rigidity - the wheel would have been something of a liability. The arrangements for lifting and moving the heavy and awkward components would have been primitive, too. Having assembled the wheel, there would have followed the iterative and doubtless long-winded process of tensioning the spokes to obtain true running of the wheel.

These problems would also have faced the later erectors of such wheels, but in the early days the manufacture of the components themselves would have been very challenging. Consider the axle: although the shaft and its hubs would have been separate castings, the shaft was a heavy casting by the standards of the day. The bearing journals would have required fairly accurate machining in a lathe, and there were no heavy duty 'sliding and surfacing' lathes c.1802. Nor were there any iron planing machines to true up the end faces of the wheel rim segments. Even the humble spokes would have posed a challenge, due to the difficulties in obtaining good quality wrought iron at that time, and the problems of producing satisfactory screw threads on the end, and indeed in producing nuts to suit.

Manufacturing technology developed quickly in the early 19th century, and the problems in producing these wheels would have been greatly eased by the time the Lumford Mill wheel was built in 1827 (see photo above and on the Hewes and Wren page). To give an idea of the immensity of the challenge faced with large wheels, see photos of the 50 ft 1870 De Winton and Co suspension wheel at Llanberis. It should be pointed out that the inner ends of the De Winton spokes are secured by tapered cotters rather than by nuts as in the case of Hewes' wheels. This change was introduced by William Fairbairn to overcome the risk of nuts becoming loose. Whether or nut loosening was a significant problem is not clear, but the potential is clearly there. However, the 25 ft wheel at Lumford Mill remained in use for well over a century, and its spokes were secured by nuts.

Hewes built wheels for the Arkwright-Strutt mill at Belper.

Built a large wheel for Greg's Quarry Bank Mill at Styal. The wheel now installed there was built by William Fairbairn & Co.

1823 Supplied a waterwheel to the textile mill of John Webb, at Tutbury [11]