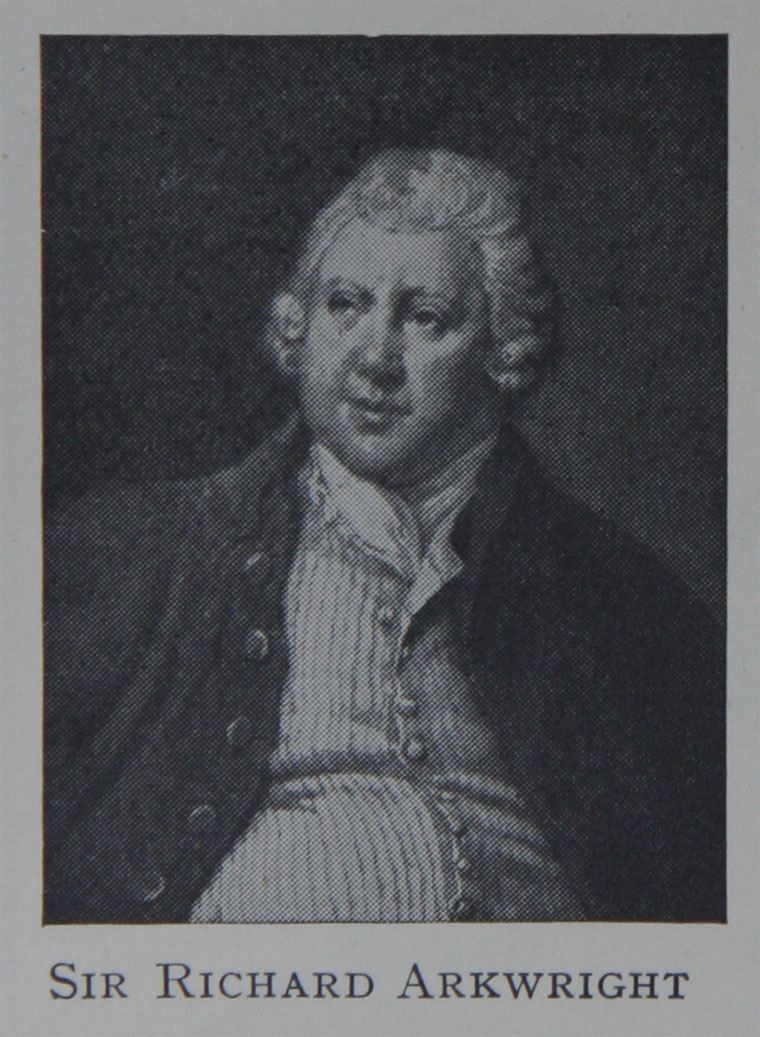 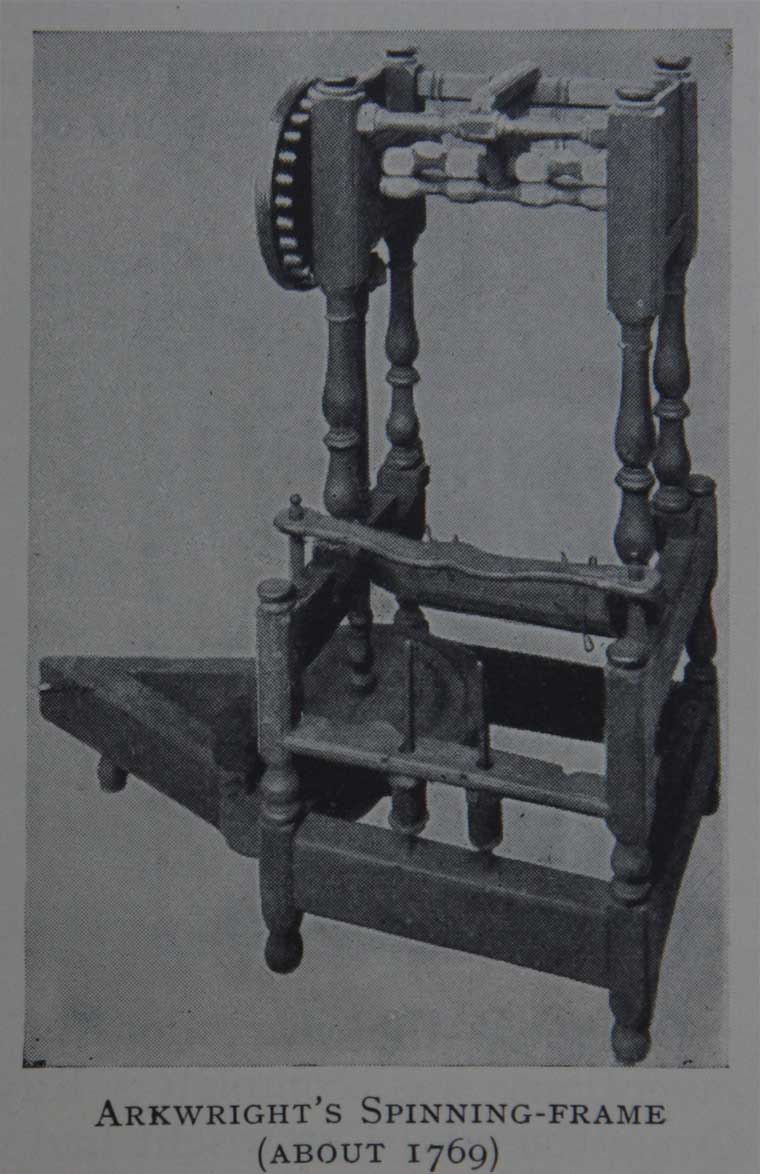 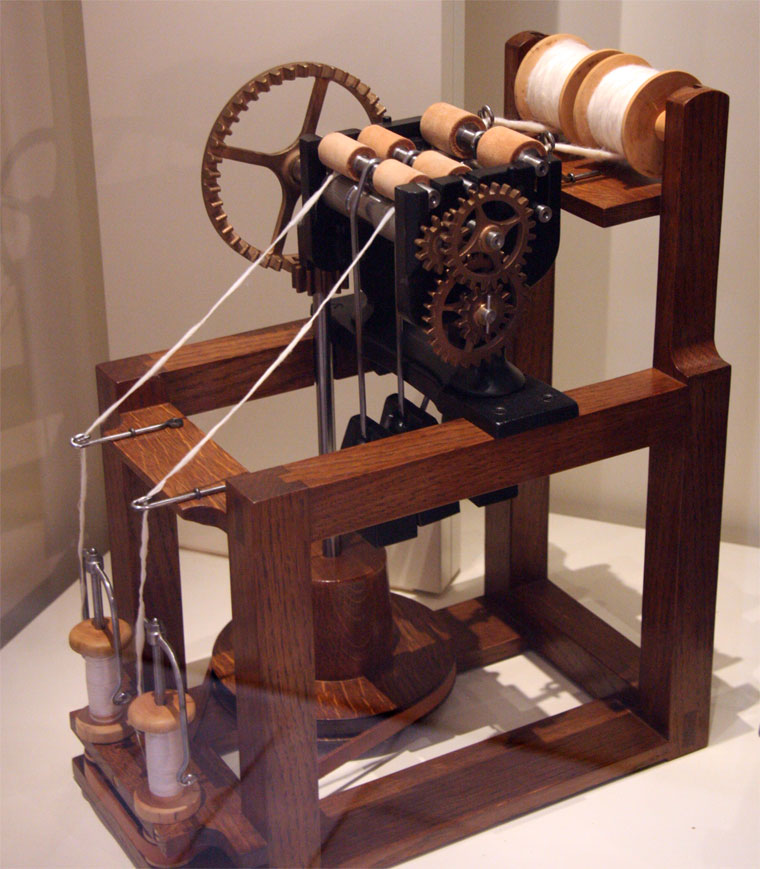 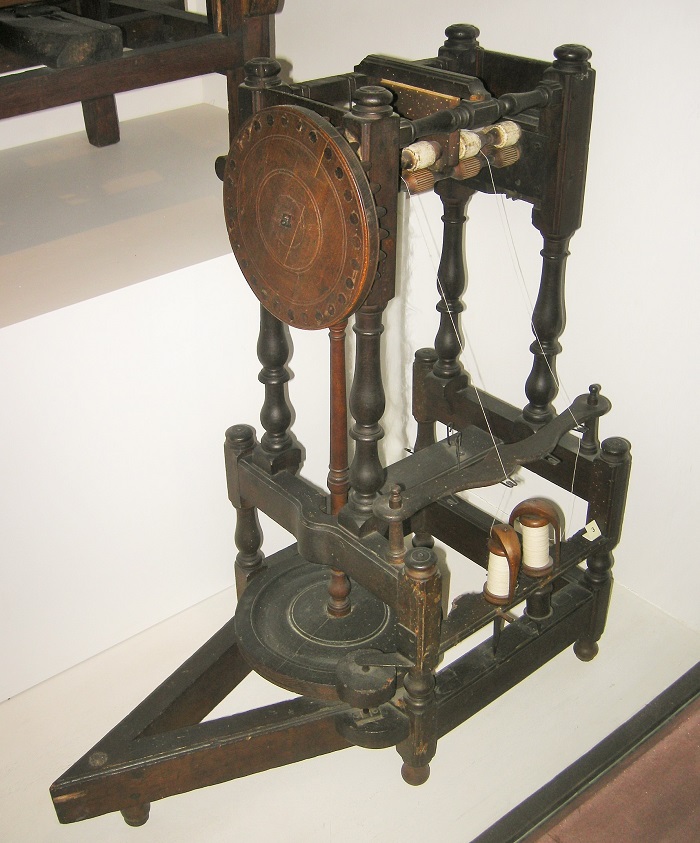 Very early example of Arkwright's spinning machine, corresponding quite closely to his 1769 patent drawing, on display at the London Science Museum. Note the minimal use of metal components. The machine evidently had four spindles originally, but now has only two. A number of parts are missing, presumably lost with the passage of time. The machine has been rather carelessly set up by the museum: one of the spindles is displaced, and the threads are bypassing the rollers.

Closer view of the early machine 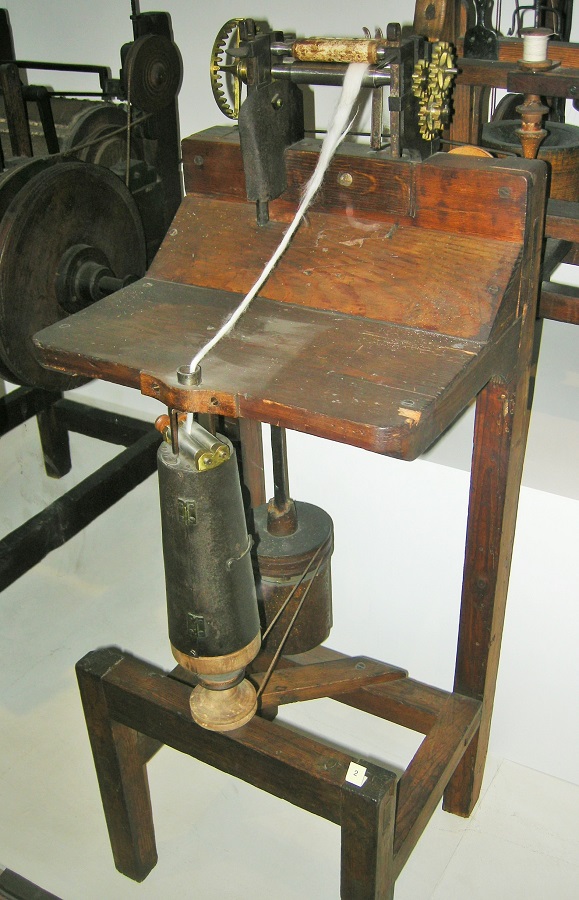 Arkwright's drawing frame, or lantern frame - probably the original, c.1780. Two 'slivers' of loose cotton fibres are fed between a pairs of rollers at the back. The fork behind the rollers moves the sliver to and fro. The slivers are combined, and their fibres straightened out, by passing through a second pair of rollers driven at three times the speed of the rear pair (note the brass reduction gears). The resultant fibre is also given a slight twist to hold the fibres together, by the action of the rotating vertical can and its small driven rollers. It is coiled in the metal can, ready for further processing (spinning). The can has a hinged door - similar to that on a lantern - which is opened to remove the roving. Displayed in the London Science Museum

Richard Arkwright (23 December 1732 – 3 August 1792) was an Englishman credited with the spinning frame — later renamed the water frame following the transition to water power.

Born in Preston, he wasn't very well educated, but began working as an apprentice barber. He later set himself up as a peruke maker in Bolton. It was only after the death of his first wife that he became an entrepreneur.

1767 He worked with a Warrington clockmaker called John Kay (not the John Kay who invented the flying shuttle) to make a cotton-spinning frame. John Kay had previously assisted reed-maker Thomas Highs; there is strong evidence to support the claim that it was Highs, and not Arkwright, who invented the spinning frame. However, Highs was unable to patent or develop the idea for lack of finance.

The spinning frame was a massive leap forward from the spinning jenny of James Hargreaves. The machine used a succession of rollers rotating at increasingly higher speeds to draw out the roving, before applying the twist via a bobbin-and-flyer mechanism. It could make cotton thread thin and strong enough for the warp, or long threads, of cloth.

1768 Arkwright, Smalley, and Thornley formed a partnership, Richard Arkwright and Co, in Nottingham, an established textile centre, to exploit Arkwright's machine; they set up a mill powered by horses.

On 19 January 1770 local businessmen Jedediah Strutt and Samuel Need joined the partners, providing £500; Arkwright and Thornley were to manage the works. Financially secure, the partners commissioned Samuel Stretton to convert the premises into a horse-powered mill. The Nottingham mill reputedly did not work until Christmas 1772.

1771 Built a new mill in the Derbyshire village of Cromford (now one of the Derwent Valley Mills). The world's first water-powered cotton mill was one of the catalysts for the Industrial Revolution. It soon became apparent that the tiny village would not be able to provide enough workers for his mill. So Arkwright built a large number of terraced cottages near the mill and imported workers from outside the area. He also built the Greyhound public house (Greyhound Hotel) which still stands in Cromford market square.

Arkwright encouraged weavers with large families to move to Cromford. He also allowed them a week's holiday a year. However, this came on condition that they couldn’t leave the village. Later in life, he taught himself the simple branches of education. He is credited with the saying: "Anyone caught whistling will be fined one shilling." The model factory villages established by Arkwright and Strutt were later imitated by others.

After the deaths of Thornley (1772) and Henry Brown, and Kay's dismissal in unpleasant circumstances, Arkwright bought out most of the other interests.

1775 he successfully applied for a patent, largely in his name, for certain instruments and machines for preparing silk, cotton, flax, and wool, for spinning.

1775 he took out another patent, this time for the complete process of cotton-thread production. In doing so, he attempted to extend the Water Frame patent by describing it as a new machine called a Roving Frame which performed a different part of the spinning process.

From the mid-1770s the company expanded rapidly. A new mill was opened at Cromford in 1776, and in 1777 Arkwright, Need, and Strutt, in partnership with Thomas Walshman, began construction of the ill-fated mill at Birkacre, near Chorley.

Between 1777 and 1780 construction of mills was begun at Bakewell, Wirksworth, Alport (unsuccessfully), Litton, Rocester in Staffordshire, and Manchester, where Arkwright failed in an attempt to obtain rotary power from a Newcomen engine.

The 1775-patent sparked a major war between Arkwright and other cotton manufacturers, who were well aware of the question-mark over his claim to have invented the machinery.

A series of court cases followed as Arkwright attempted to prosecute rivals who had infringed his patents, culminating in an action brought by The Crown in 1785. Several witnesses, including Thomas Highs, testified that Arkwright had systematically stolen their ideas. The result was that the patents were revoked and, when Arkwright appealed, the judge, Mr Justice Buller, insisted: "…the defendant had not a leg to stand upon."

However, this had no material effect on Arkwright's prosperity. His first steam powered mill was opened in Manchester in 1781, although it was not immediately successful.

1780 Arkwright, by himself, purchased land alongside the Derwent where he built his masterpiece, Masson Mill.

1782 The partnership with Strutt and Need ended after the death of Need.

Arkwright bought the manor of Cromford. He became High Sherriff of Derbyshire.

1792 Arkwright died, one of the richest men in England. He is buried in the church that he had built in Cromford. At the time of his death, his fortune was estimated to be in excess of £500,000.

Arkwright married his first wife, Patience Holt, in 1755. They had a son, also named Richard, who was born the same year. The following year, Patience died of unspecified causes. Arkwright later married Margaret Biggins in 1761. They had three children, of whom only Susanna survived to adulthood.

1824 Claim was made that Arkwright pinched the idea of the water frame from [Henry?] Brown, a cabinet maker [1]