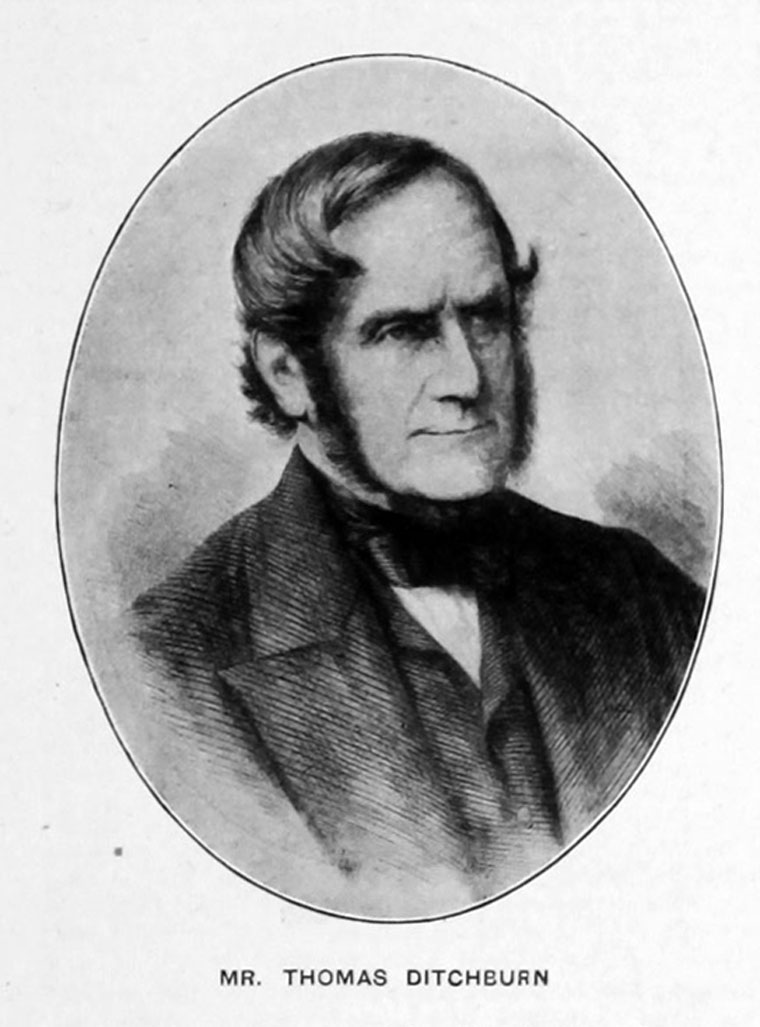 He was a shipwright apprentice at Chatham Dockyard and had worked under the famous constructor, Robert Seppings. Leaving the Admiralty he became a manager to Fletcher, Son and Fearnall of Limehouse. By 1830 he was master shipwright for the company. He altered the shape of the Magnet's bow, which so satisfied its owners that the yard became noted as builders of fast vessels.

Later he joined Charles John Mare in opening a yard a Deptford. This became Ditchburn and Mare

IT is with much regret that we have to record the decease of Mr. Thomas Ditch burn, one of the pioneers of iron shipbuilding on the Thames.

The late Mr. Ditchburn served his apprenticeship in Chatham Dockyard, under Sir Robert Seppings, with whom he was a favourite pupil, being employed much by him in making models and trying experiments in connection with his numerous inventions. About the year 1824 he undertook the management of the extensive shipbuilding establishment of Messrs. Fletcher and Fearnell, at Limehouse. But while engaged here in constructing wooden vessels he became convinced that iron was a better material than wood for shipbuiding purposes, and at once set about establishing himself in business as a builder of ships of iron as well as wood. To facilitate this object he entered into partnership with Mr. C. J. Mare, and commenced business at Deptford. One of the first iron ships built by the firm of Ditchburn and Mare was for the Russian Government, and was named the Inkerman. She was a small vessel of shallow draught of water, and was so great a success that the new firm immediately afterwards obtained orders for several small vessels to run on the Thames above London Bridge. These little vessels were named Starlight, Daylight Moonlight, and Twilight, their engines being made by Messrs John Penn and Son, of Greenwich. So great was the success of these iron boats that the firm was immediately. employed to build numerous iron river boats of various sizes. Several for the Woolwich and Greenwich service, others for the Gravesend, Harwich and Ipswich companies - indeed, orders came in so rapidly that the firm found it necessary to seek for better and more extensive premises. The result was the establishment of the works at the Orchard Yard, Blackwall, now in tho occupation of the Thames Iron and Shipbuilding Company. The firm of Messrs. Ditchburn and Mare now became known all over the world, and vessels of every description were rapidly constructed for numerous companies and corporations, as well as for the British and foreign Governments for service in the North Sea, in the British Channel, on the Rhine, in the Mediterranean, the Black Sea, the Baltic, on the Swiss lakes, and on the English and Scotch rivers. Thus in all parts of the world iron steam vessels designed by Mr. Ditchburn, and built by Messrs. Ditchburn and Mare, were found making known the advantages of the new material (iron), and laying the foundation of nearly all those lines of packet steamers now so numerous and celebrated.

About the year 1844 Mr. Ditchburn was employed by the Lords of the Admiralty to design and construct for her Majesty's use the steam yacht, which was named the Fairy.

Having narrowly watched the experiments of Ericsson and Smith, Mr. Ditchburn became so thoroughly satisfied that the screw propeller was an improvement on tbe paddle-wheel, that he recommended the authorities to adopt that mode of propulsion. The Fairy was accordingly fitted with a screw propeller which vessel was the first fitted with tho screw propeller in the British navy and her excellent performances have hitherto been unsurpassed.

A Short History of Naval and Marine Engineering by E. C. Smith. Published 1937