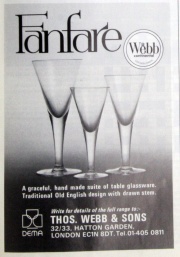 1829 Thomas Webb entered the glass industry, becoming a partner in the Wordsley glassworks of Webb and Richardson[1]

1835 John Webb died and Thomas succeeded to his father's share in the Shepherd and Webb business.

1840 Having completed the new glass works, Thomas Webb moved to Platts House at Amblecote, very near to the Dennis estate which became Thomas Webb’s glassworks.

1851 Webb exhibited a wide range of table and decorative glass at the 1851 Great Exhibition and won a medal for the cut glass.

1855 The company moved to Dennis Glassworks, which became a hive of industry and subsequently involved several of his sons.

At some point before 1869, his oldest son Charles also became a partner and the firm became Thomas Webb and Sons.

1869 Thomas Webb died and was succeeded by his son, Thomas Wilkes Webb, under whose astute leadership the company’s fortunes prospered to such an extent that the name of Thomas Webb became known amongst connoisseurs of glassware throughout the world. His energy and enterprise knew no bounds and he travelled thousands of miles, not only to secure new business but to bring to Dennis Glassworks some of Europe’s finest craftsmen. During this period fine crystal and coloured glass was made, including Cameo and “Rock Crystal”. Upon Thomas Webb’s death, his fourth son Walter Wilkes Webb also became a partner.

1878 and again in 1889, the exquisite products of Thomas Webb and Sons were on display at the great Paris international exhibitions where they competed against glassware from many countries. On each occasion the Grand Prix was awarded to Dennis Glassworks and Thomas Wilkes Webb must have been a proud man indeed to read in the 1878 exhibition’s illustrated catalogue that "Messrs. Thomas Webb and Co of Stourbridge are the best makers of glass in the world”. In recognition of his contribution to these exhibitions, Thomas Webb was made a Chevalier of the Legion of Honour, an award which the French seldom give to a foreigner.

1887 The company was registered on 19 April, to take over the business of the firm of the same name, glass manufacturers, of Stourbridge, London and Australia, but the last has since been disposed of. [3] Walter Wilkes Webb and his brother Charles Webb became joint Managing Directors. Charles F. Wedgwood joined the Board of Directors. Thomas Wilkes Webb retired due to bad health.

1937 Listed Exhibitor - British Industries Fair. Makers of Crystal Lamps, as well as finest Table Glass of all descriptions, cut and engraved in the best British Crystal. Contractors to the Admiralty, War Office and the Air Force. (Stand No. Cb.613) [8]

Dennis Hall closed its doors in 1990, due to the collapse of the Coloroll group. A petition helped save the mansion from being pulled down in 2000. It has now been converted into luxury flats.