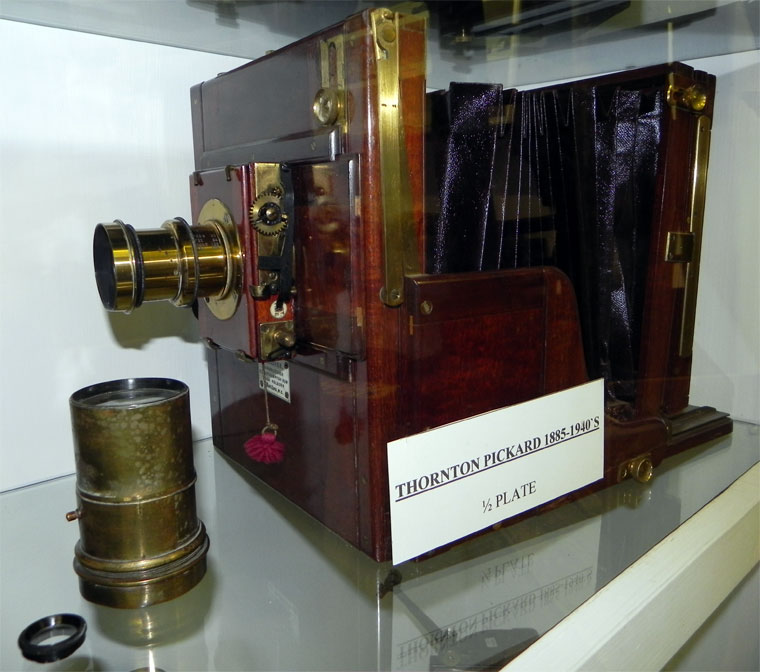 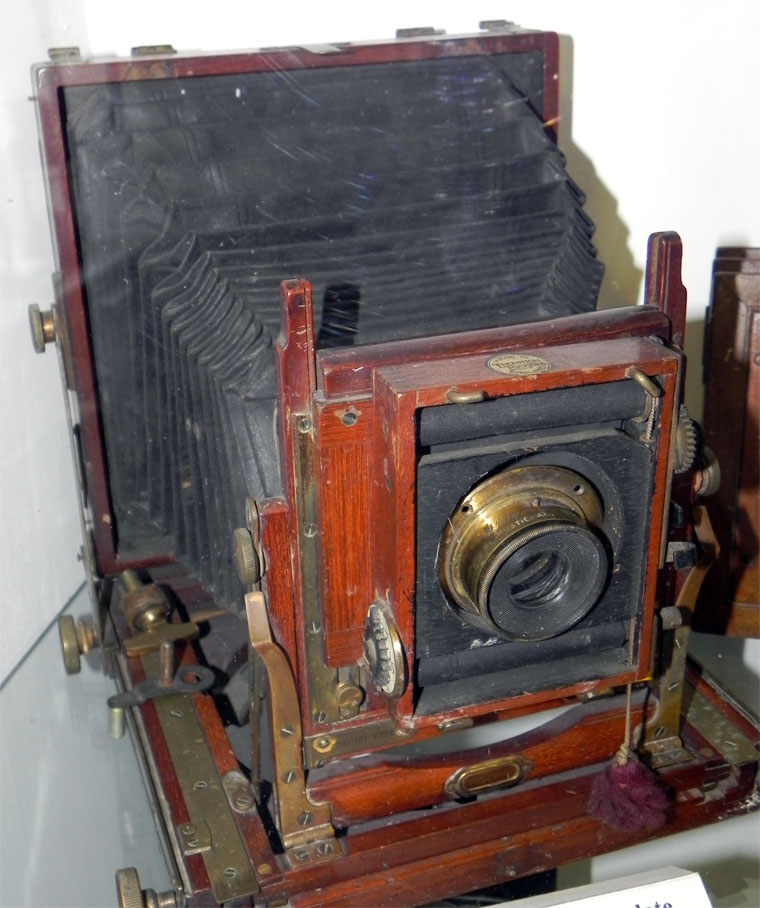 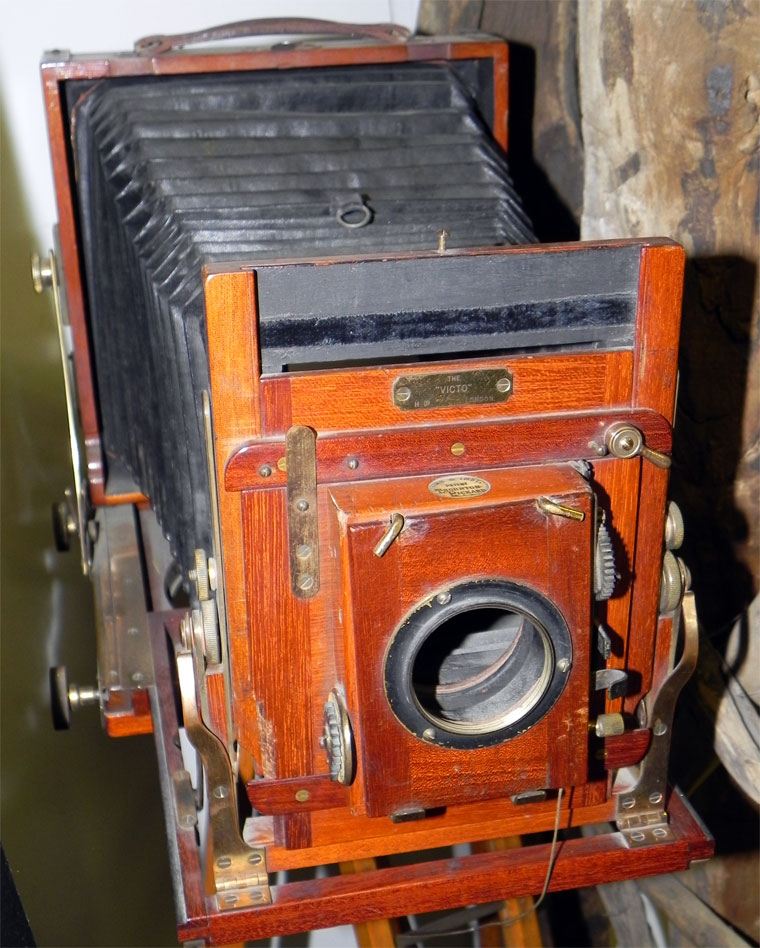 Exhibit at the Grassington Folk Museum. 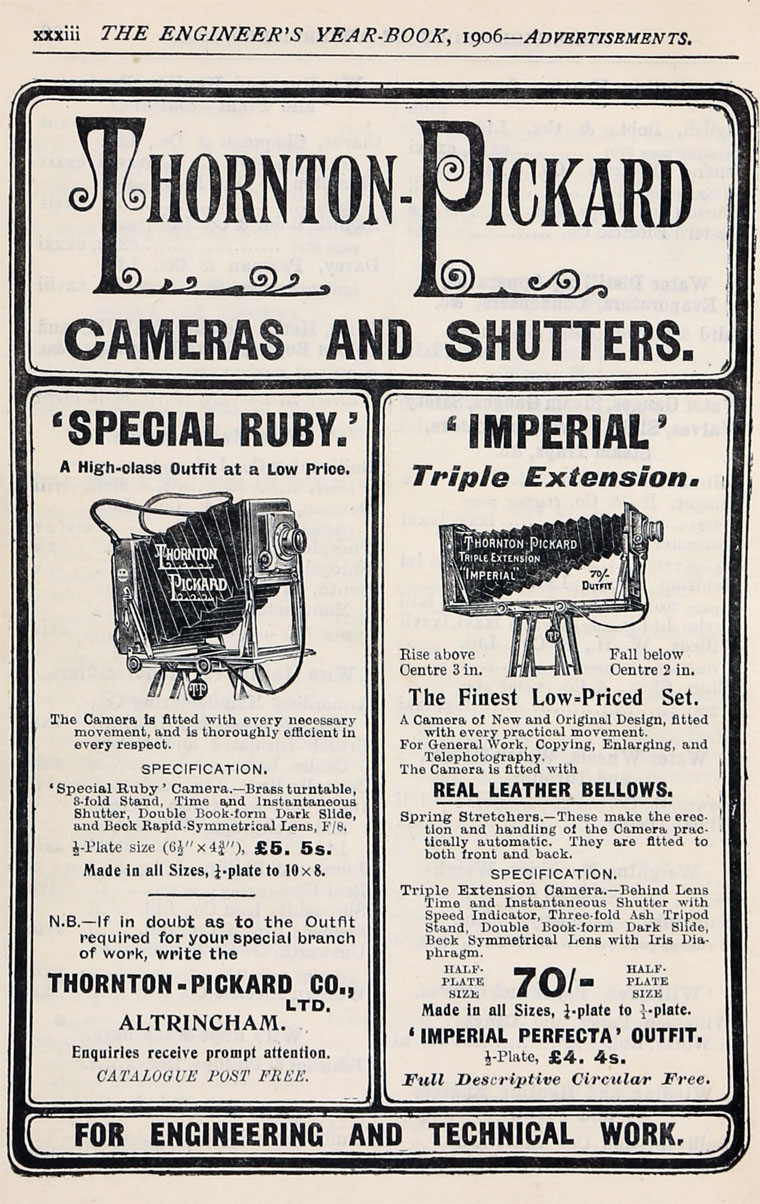 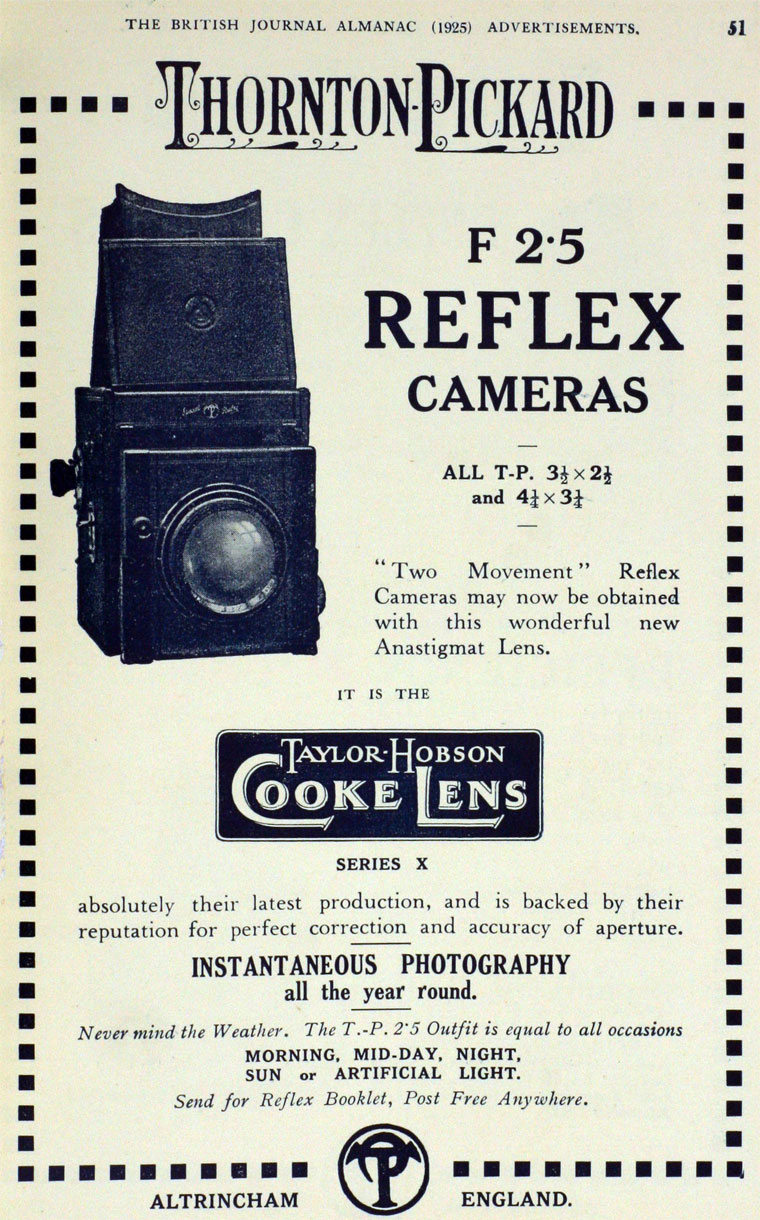 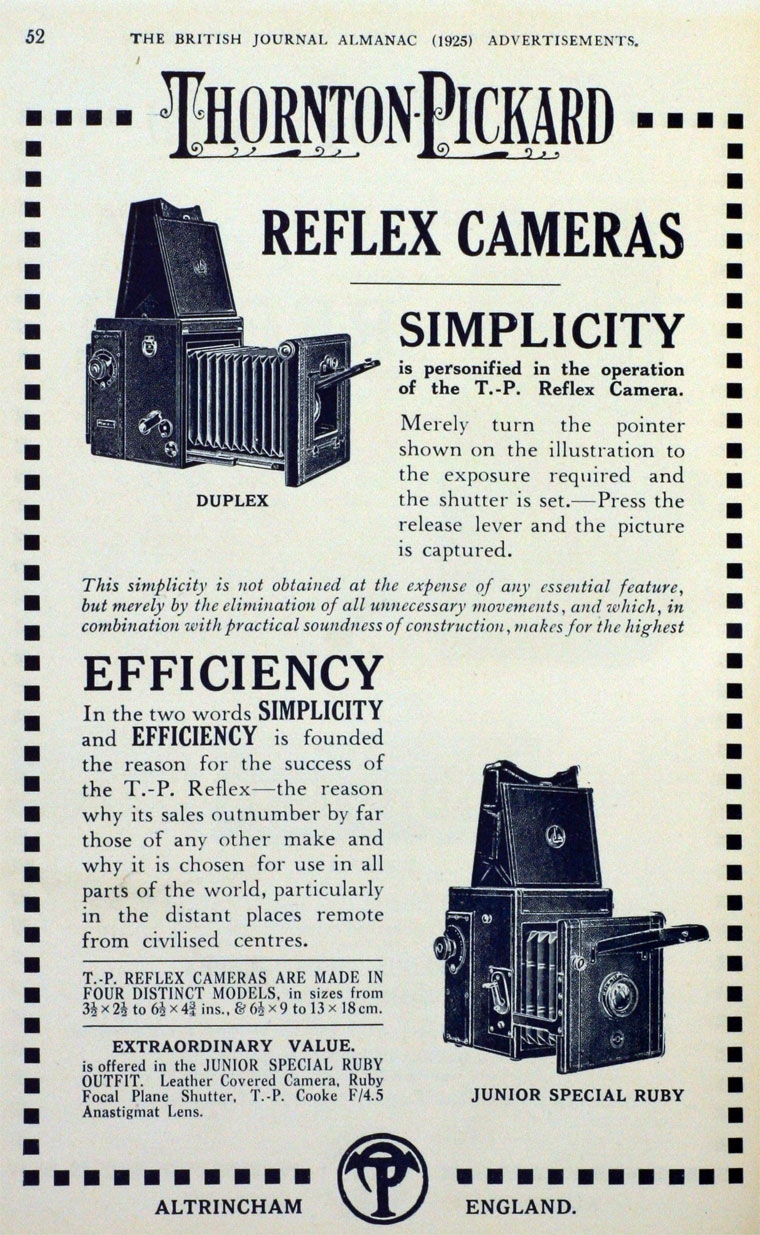 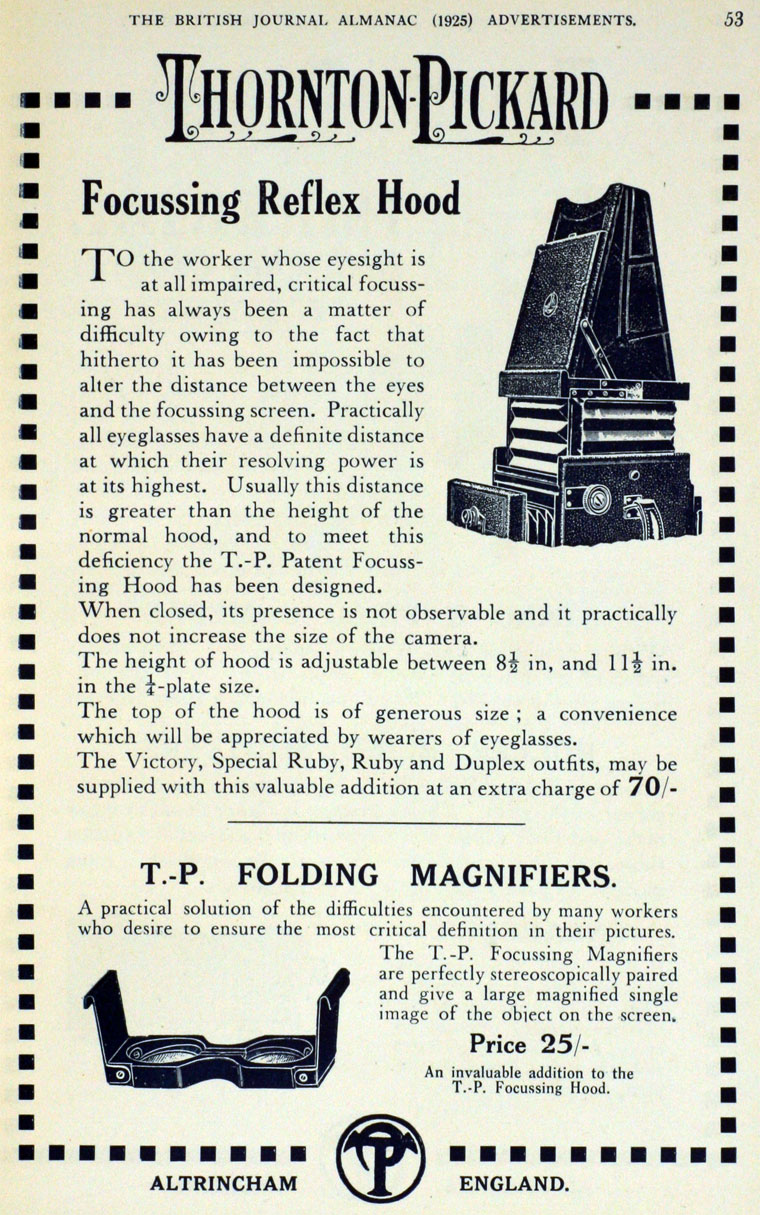 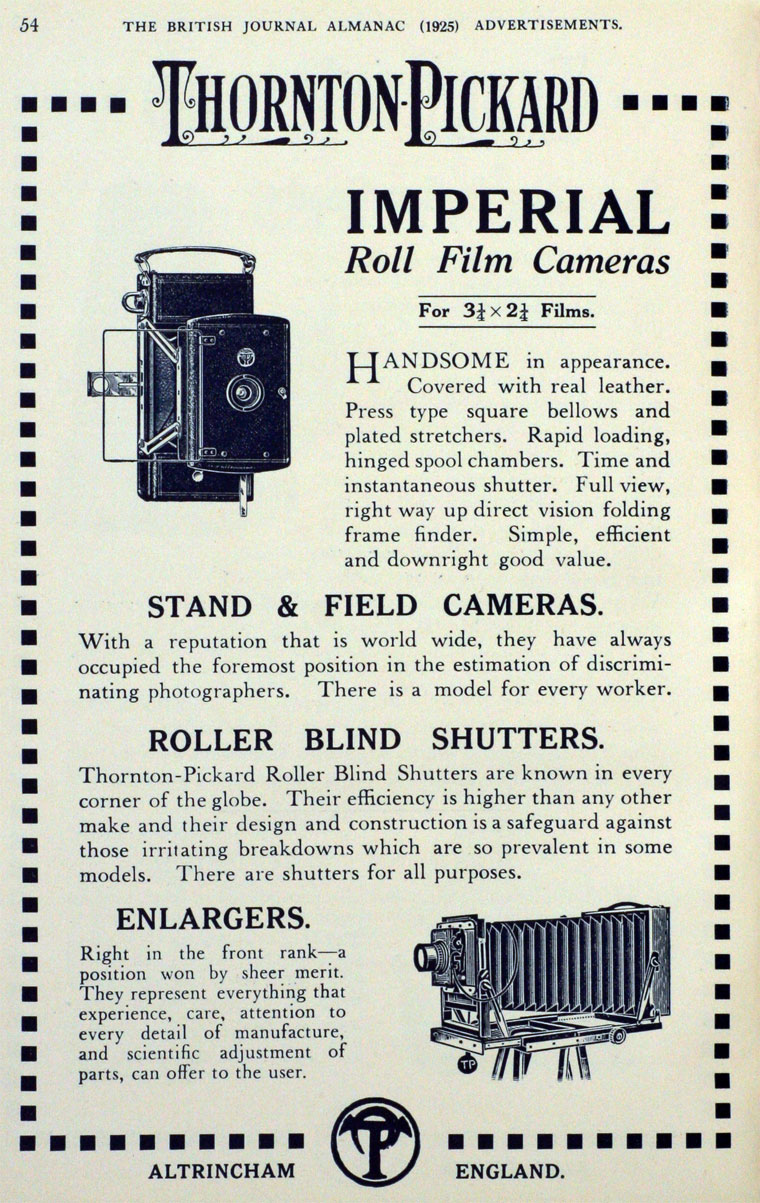 From 1880 to 1886 John Edward Thornton (1865-1940) was apprenticed at the printing company of George Faulkner and Sons. There he invented a new camera (the Jubilee) and the Time roller blind shutter.

1886 Founded his own company that sold cameras and shutters, including designs he had patented that were produced for him by others. The Jubilee for example was made by Billcliff of Manchester.

1887 Exhibited products at the Royal Jubilee Exhibition. Launched the Thornton Manufacturing Company to produce his shutters and cameras. At the end of the year he held 12 patents.

1888 Edgar Pickard (1862-1897) joined as engineer and business manager, and became partner. The company became Thornton-Pickard Manufacturing Co Ltd concentrating on the production of shutters (much in demand) and added the camera model Artist to their other products.

Some years later moved to Altrincham.

1898 Thornton left the company after disputes with Pickard.

Achieved reductions so that some budget camera models could be offered, such as the Imperial triple extension camera and the Tribune. Later a series of cheap snapshot cameras was added: Snappa, Clipper, and Limit, as well as a new flagship series: the Ruby Reflex SLRs. Many Thornton-Pickard cameras were equipped with Dallmeyer lenses.

1919 After G.A. Pickard's death, Arthur Gray Pickard took over the lead. Beside new cameras the company launched the Picabrik construction kit for children.

1929 Listed Exhibitor - British Industries Fair. Manufacturers of "Picabrix" a wood Constructional Building Toy composed of Blocks of various definite forms and drilled with holes in definite arrangement. These are held together my means of wood pegs inserted in the holes. (Stand No. C.50) [2]

1939 The company remained as a maker of quality cameras until its end in 1939.