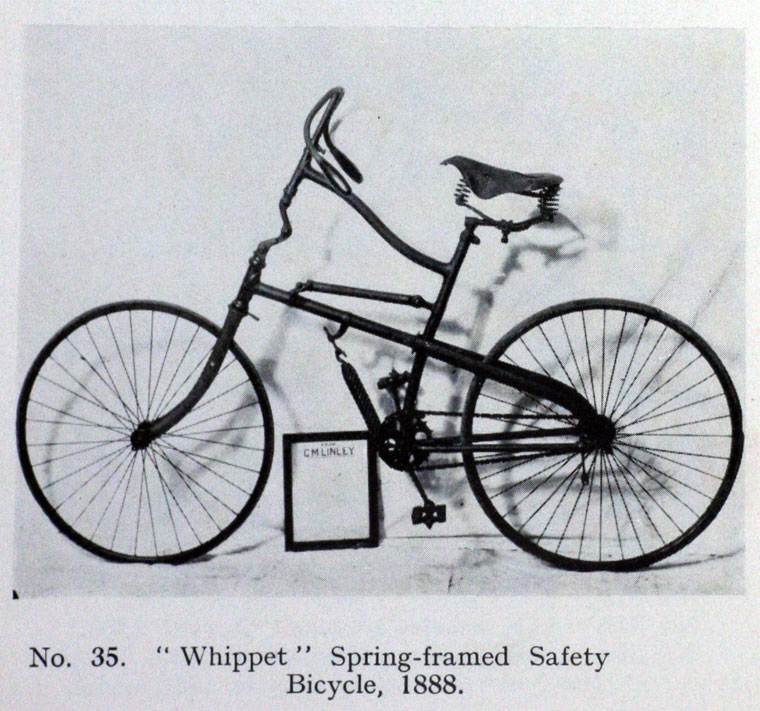 This machine embodied the most practical and successful spring-frame ever designed, its great feature being that the relative positions of the saddle, pedals, and handlebar, did not vary, these three points being built up on a rigid triangle, separated from the main frame by a strong coil spring and a movable shackle in the steering mechanism. Thus it was impossible for road shocks, from either wheel, to reach the rider.

In the two earlier climbs he rode a spring-frame machine, but in the 1891 event he used a rigid framed 'Whippet.' Chater-Lee acquired his cycle-engineering knowledge as a pupil of C. M. Linley, being employed at the Whippet Works. A letter from C. M. Linley is attached to the exhibit: while claiming that his 'Whippet' spring-frame was a practical and commercial success (a claim which he is entirely justified in making) Linley proceeds:—

“In 1888 the pneumatic tyre appeared, and I recognized that the death knell of the 'Whippet spring-frame had been sounded. The air tyre, by intercepting road shocks before they reached even the rim of the wheel, was a more efficient anti-vibrator device than any contrivance relying on springs in the frame of the cycle itself."

Note the extension on front and rear forks, drilled to carry the mudguard stays, a detail which has been acclaimed as “a modern improvement" 35 years after Linley first used it.

Note also that the toggle joints in steering mechanism have ball-bearings.