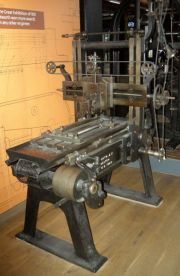 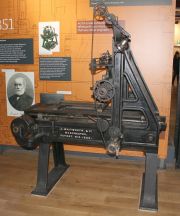 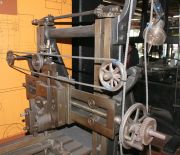 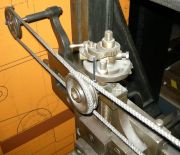 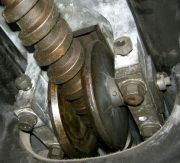 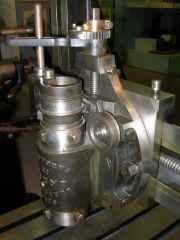 L4. 'Jack in the box' toolholder 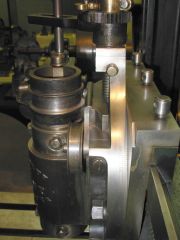 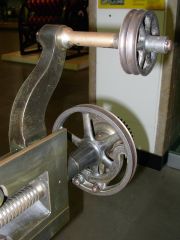 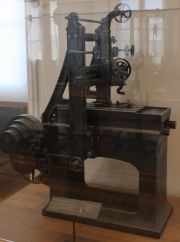 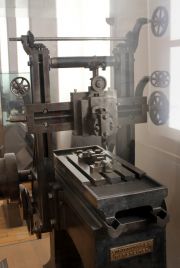 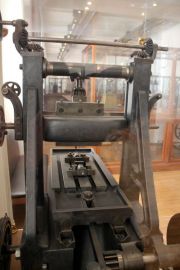 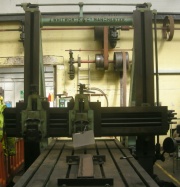 Quick reverse arrangement on 1880s planing machine at Underfall Yard Workshops. The belt is shifted over to drive the low or high reduction bevel gears

This is a sub-section of Joseph Whitworth and Co

Note: The photographs' prefix letters refer to the location of the machine (Manchester, London and Paris, Underfall Yard).

Planing machines provided their designers with plenty of scope for innovation in the mechanisms for reciprocating the tables, providing automatic feed, reducing unproductive time, and minimising wear and power consumption. No consensus ever emerged on the best ways of meeting the aims, making planers interesting machines to study.

In 1835 Joseph Whitworth patented a number of improvements to metal planing machines. Some of the patented features remained in production for many years, and can be seen on 1842 machines displayed in two museums, Manchester's Museum of Science and Industry (MoSI) and the London Science Museum.

The Science Museum's machine has Whitworth's patented toolholder which held two opposing tools. At each end of the machine's stroke the toolholder was rapidly kicked round through 180 degrees to allow cutting in both directions. This was ingenious, but very complex, and attracted criticism, especially from Whitworth's rivals. It is not clear to what extent the various theoretical objections were borne out in practice, but the system was not universally popular.

The MoSI example does not have the rotating toolholder. It does retain the cotton ropes and pulleys, but these had other purposes, namely to provide automatic cross feed, and also downward feed (if required). The MoSI machine's downfeed arrangement is illustrated in, but not necessarily clarified by, photos M4 & M5. Suffice to say that the rope moved back and forth, and the ratchet served to turn the toolpost's leadscrew in one direction only. Photo M5 shows a small lever which disengages the ratchet. The vertical peg, bolted in the curved slot, doubtless altered the amount of feed, by determining the number of ratchet 'clicks'.

Cotton ropes may look out of place for actuating machine tool mechanisms, but makers and users of spinning mules (including Whitworth) would have been quite at home with such arrangements.

A unique feature is the patented drive for the table. Whitworth rejected rack and pinion or chain drive in favour of the regular motion offered by a leadscrew. Concerns about friction and wear were addressed by an interesting innovation. Instead of a conventional nut, the deep coarse-pitch screw engaged with two pairs of rotating discs or rollers. This arrangement is found on the Science Museum machine (see photo L2), whereas the MoSI machine has a plain nut (M7). It was important to carefully adjust the horizontal position of the discs relative to the leadscrew, and in photo L2 it will be seen that horizontal bolts are provided. These are also retained on the MoSI machine, perhaps suggesting that the nut was a replacement for earlier discs.

Atkinson[2] compares the arrangement with worm and wheel transmission, and calls the discs 'disc-pawls'. Certainly the leadscrew resembles a worm more than a leadscrew, but the discs make rolling contact in Whitworth's arrangement, rather than sliding contact. Friction does arise at the journal bearing on which the disc revolves. The velocity of the journal relative to the bearing is much lower than would have been the velocity of the leadscrew surface relative to a conventional nut (Whitworth aimed for a velocity ratio of 1:7). He originally applied this system in 1835 on the carriages of his self-acting spinning mules. He also used it on the feed screws of his vertical slotting machines.[3]. Lubrication is key to the long term success of the arrangement, and it is not obvious that the bearings could be (or would be) readily lubricated on the planing machines.

An interesting Whitworth planing machine, dating from c.1850, is on display at the Musee des Arts et Metiers in Paris (photos P1-P5). This is a 'crank-type' planing machine, in which the table is moved back and forth by a crank, rather than by leadscrew or by rack and pinion, or other mechanisms. The crank operating system had the advantage of avoiding the complication of other systems worked by screw, chain, or rack. It was simple and robust, but the stroke length was limited, and the cutting speed varies throughout the stroke. The Paris machine incorporates a quick-return motion for the table, which minimises the lost time on the non-cutting return stroke. Joseph Whitworth is credited with originating the quick return mechanism.

Returning to the MoSI and Science Museum machines, Atkinson credits Whitworth with the simple table reversing arrangement which uses a single drive belt and two bevel pinions (L3) driven by coaxial shafts. The belt, which ran continuously in one direction, was automatically shifted sideways from one pulley to the other, via the loose pulley, so as to drive either the left or right hand pinion. Photo M8 shows the pulley and belt shifting arrangement. L1 shows the rod with two pins near the left hand end which move the bell crank to shift the belt. The rod is moved by the table after moving through a distance determined by two adjustable collars. In photo L1 the position of the collars would prevent any movement.

Returning to the arrangements for incrementally advancing the tool's position, the three older machines shown above all utilised a rope moved by a pulley oscillating back and forth through an arc. The method of achieving this on the MoSI and Science Museum machines is not apparent, although it involved a tumbling counterweight, seen in the photos. The motion was transferred to shafts, and the direction was changed by bevel gears. These did not have a full circle of teeth, since they were only turning through a limited arc. This may be apparent in photo M5 on the bevel gear with the vertical axis (note that the gears are not in mesh).

Rope tension was maintained by a weighted idler pulley, visible at the top of photo M6.

On the Paris machine, the oscillation of the rope drive pulley is obtained by an unusual arrangement. The slender pulley (to the right of the large gear) is rotated through an arc by a pin engaging with an eccentric groove in the face of the disc on the large gear's shaft (just visible in photo P4).