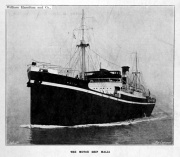 1867 Company founded. William Hamilton was in business with his brother John Hamilton.

1902 Sold the Newark Yard, Port Glasgow, to the Ferguson Brothers [2].

1900s Although the Glen yard made six ships a year, no ships were made in 1903. However, orders soon picked up again, as local orders for tramps kept the yard afloat.

WWI The yard made over a dozen warships including sloops, "X" craft lighters, merchant ships, tankers and cargo liners.

1919 Hamilton retired and sold the yard to the Lithgow Brothers who inherited the yard's impressive list of liner customers.

1920s As with many other yards, the 1920s saw a period of slow business but the yard continued making passenger ships, cargo-liners, tramps and tankers. 25 such ships were made between 1920 and 1930.

1935 Reopened in 1935 to build the first company ship to have refrigerated capacity: Marwarri. Orders also came in from African and local companies.

WWII The yard built six standard "Empire" tramps, and five others to private order along with five cargo-liners as well as some rebuilding work.

1945/50s The main output of the yard was cargo-liners which accounted for half of the ships built. The other half was for tankers.

In 1963, the yard completed its last ship and also launched its last ship (Treneglos and Freetown respectively). The Glen yard was then merged with the East yard of Lithgows who absorbed it into their ambitious modernisation programme.