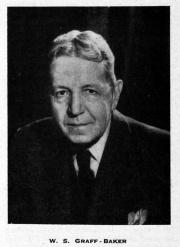 It is with regret that we have to record the death on Friday last, February 15th. of Mr. William Sebastian Graff-Baker, the chief mechanical engineer (railways) of London Transport.

Mr. Graff-Baker was born at Baltimore, in the United States, on November 14, 1889, and received his general education at St. Paul's School, London, Cleobury Mortimer College, and the John Hopkins University, in the United States. In 1908 he entered the City and Guilds of London Central Technical College, where he gained the A.C.G.I. Diploma and a B.Sc. (Eng.) degree.

It is not surprising that, at the end of his technical education, Mr. Graff-Baker turned his attention to electric traction, for both his father and his grandfather were builders of electric street railways and electric tramways, the former in America and the latter in this country.

He entered the service of the Metropolitan District Railway as a junior electrical fitter when he was twenty years old, and from then to the time of his death was concerned with railway transport in London. After a relatively short period as an electrical fitter he was appointed an assistant to the mechanical engineer in 1912 and a year later was placed in charge of all lifts and escalators on the London Electric Railway and the Central London Railway. In 1921, after serving some months as personal assistant to the mechanical engineer, he was made car superintendent.

A year was spent in this capacity, when he was appointed an officer on the Underground group of companies with the title of assistant mechanical engineer. He retained this post after the formation of the London Passenger Transport Board in 1933.

In February, 1935, Mr. Graff-Baker became the chief mechanical engineer (railways) of the Board and from then till his death he was responsible for the design, construction, maintenance and overhaul of all the rolling · stock, lifts and escalators of London Transport. During his term of office Mr. Graff-Baker was primarily concerned with the introduction of the many improvements which have taken place on the railways of London Transport, and have made for rapid, safe and comfortable travel on both the surface and tube lines.

He was responsible for the design and introduction of al1 the improved designs of rolling stock now running on, or on order, for the lines, including the lightweight District Line stock now being placed in service. One of his important contributions to the design of electric rolling stock was the tu be stock, introduced on London Transport in 1938, with roller axle and suspension bearings, and improved cam-operated electrical control equipment. His flair for invention and design led to the introduction of faster escalators, more efficient automatic door equipment, and faster and roomier trains, as well as many other developments which have made the London Transport rail system second to none.

In addition to being an engineer of repute, Mr. Graff-Baker was a man of wide interests with many friends, and he was well known in several technical societies. Although he was naturalised shortly after his education in this country, he maintained a close contact with the United States and was a member of the American Society of Mechanical Engineers.

"WILLIAM SEBASTIAN GRAFF-BAKER, B.Sc. (Eng.), was chief mechanical engineer of the London Passenger Transport Board, and had been associated with London's railways during the whole of his professional career. After receiving his general education at Colet Court St. Paul's School and Johns Hopkins University, in the United States, he studied at the City and Guilds of London Technical College, where he graduated with second-class honours in engineering in 1910 and also obtained the Associateship of the College. He then became an engineering cadet at the Ealing Common works of the Metropolitan District Railway and, on the completion of his training two years later, was employed as a junior technical assistant to the mechanical engineer. He continued as technical assistant until 1921 when he was made assistant mechanical engineer. He became chief mechanical engineer in 1935, an appointment he held until his death, which occurred on 15th February 1952 at the age of sixty-two.

During the 1939-45 war he was attached to the Ministry of Supply as deputy director-general of tank production. Under his direction new tube rolling stock with underfloor-mounted equipment and the "Metadyne"-controlled shallow line stock were introduced, as well as automatically controlled high-speed lifts and the later designs of escalator. Mr. Graff-Baker was elected a Member of the Institution in 1944 and was the author of a paper on "Considerations on Bogie Design with Particular Reference to Electric Railways", which was presented at a general meeting of the Institution in January. 1952. He was also a past-president of the Institution of Locomotive Engineers, a Member of the Institute of Transport, and a Member of the American Society of Mechanical Engineers, and had served with the rank of lieutenant-colonel in the Engineer and Railway Staff Corps."