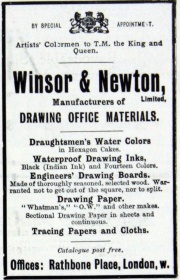 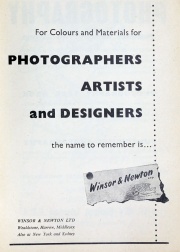 Winsor and Newton founded their business in 1832, at a time of extreme social and cultural change in Britain. The Industrial Revolution was fully fledged and was therefore generating an explosion of technology and trade from all over the world, enabling new materials to be brought into England. With their aim of providing the best choice of pigments with the highest permanence possible, Winsor and Newton were able to take full advantage of the opportunities that were opening up to them and within a couple of decades had introduced many new pigments and colour ranges.

1832 William Winsor, a chemist, and Henry Newton, an artist, established their partnership at 38 Rathbone Place, London. This was Henry's home, which was then part of an artists' quarter in which a number of eminent painters, including Constable, had studios, and where other colourmen were already established.

1835 Winsor and Newton developed the first moist water colours utilising the moisture-retaining properties of a recently discovered material, glycerine. The new water colour pans were much simpler and more convenient to use than water colour cakes and quickly earned well-deserved popularity. Artists such as Turner were now able to paint outdoors prolifically in water colour.

1841 Royal recognition came early for Winsor and Newton in the form of appointment as artists' colourmen to Queen Victoria, and the issuing of the Royal Warrant.

High-quality products together with the prestige of royal appointments and awards at international exhibitions helped to stimulate trade for Winsor and Newton overseas'. During the second half of the nineteenth century there was hardly any competition in the manufacture of artists' materials in non-European countries and this doubtless encouraged ever-increasing exports to the U.S.A. and also India and Australia.

1851 Winsor and Newton exhibited at The Great Exhibition in the Crystal Palace and were awarded the only prize medal open to competitors for artists' colours. This was the first of many successful exhibits in numerous International Exhibitions, including the Chicago World Exhibition in 1893, where Winsor and Newton were awarded the medallion for the development of permanent artists' colours.

1881 A few months before the death of Henry Newton in 1882, Newton sold the business to the newly incorporated firm of Winsor and Newton Ltd which included members of both families amongst the shareholders, with Newtons employed until the late 1970's.

Until the beginning of the twentieth century, Winsor and Newton had concentrated entirely on products for painting and drawing. However, by the Edwardian period the painting market was very different due to the invention of the camera and artists were no longer in such great demand. The company began to take up craft products, starting with pen painting materials in 1911, and the range was expanded over the following years. It was fortunate that home trade was broadened in such a way, for overseas trade suffered a series of setbacks during the first world war years and subsequent depression. However, during the second world war manufacture of artists' and draughtsmen's materials continued for the war effort despite limitations imposed by raw materials shortages.

1916 Five firms, including Winsor and Newton, George Rowney and Co, Reeves and Sons, James Newman and C. Roberson, acting together as Associated Colour Merchants, signed an agreement in 1916 with J. Barcham Green and Son to produce a range of papers, watermarked ‘A.C.M.’ and the words ‘Watercolour Paper England’.

By the 1930's the conditions of economic depression had had a very serious effect on the volume of trade both at home and overseas, and directors of the firm decided to compensate for this by making and selling colours of students' quality. Innovation continued throughout the decade, however, and in 1937, Designers Gouache was introduced, a highly pigmented opaque water colour. It became the most popular medium used by graphic designers and also allowed fine artists to use body colour in water colour without having to add white to ordinary water colour. To increase efficiency and reduce costs, all Winsor and Newton activities were moved to Wealdstone, Harrow. Colour manufacture was transferred there from the North London Colour Works in 1938 and the administrative offices were moved from Rathbone Place the following year. This was fortunate, as it meant archives and business were safe when Rathbone Place was destroyed in the London blitz just a year later.

1946 In the immediate post-war years after the activity of war, brush-makers tended not to return to a sedentary occupation. For this reason it was necessary to look for a new factory site in an area with a surplus of labour. The East Anglian fishing port of Lowestoft proved perfect, as the skills required for mending the fishing nets could be transferred to tying knots for brushes.

1950 Windsor & Newton purchased the property on which had stood the Lowestoft Porcelain factory in the 19th century; in 1955 they demolished most of the surviving remnants and remains of the kiln.[2]

A brush making department also continued at Harrow until 1982.

In spite of the austerity of the post war years, the social changes of the 70s and recession of the 80s, Winsor and Newton maintained a strong manufacturing base and were able to proudly develop two completely new types of colour.

1970 Winsor and Newton introduced their first range of Artists' Acrylics, a revolutionary water based paint, which has subsequently become as popular as oil colour.

1976 The first alkyd colour for artists was introduced by the company. This fast drying oil colour range enabled outdoor artists and designers to complete oil paintings in a fraction of the time required with conventional oils.

By the 1990s there were so many new organic pigments available that Winsor and Newton embarked on some far reaching reviews to ensure artists would be able to enjoy everything from entirely new colours to greater brilliance and permanence. Almost 200 new colours were introduced over the following 15 years and this process is still continuing today.

1996 Winsor and Newton embarked on the most significant change to the Artists' Water Colour range in 164 years. The availability of so many new pigments meant that 35 new colours were introduced into the range, offering artists the widest and most balanced spectrum with the greatest permanence.

1998 Winsor and Newton revealed the results of a long research project to supply a range of both colours and mediums in oil which could be thinned and cleaned up with water. This range allowed an enormous number of artists to enjoy oil colour without the use of hazardous solvents.

2008 The company is part of Wilhem Becker, who also own other suppliers of artists materials, including Reeves and Sons.