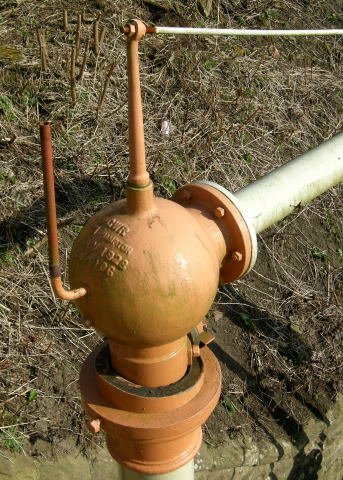 GWR water column made at Wolverhampton Works in 1928, viewed from the footbridge of Parkend Station on the Dean Forest Railway. Note the cam arrangement to return the swivelling pipe to the safe position

Wolverhampton Railway Works was in the city of Wolverhampton. It was located almost due north of the city centre, and it is commemorated with a small display of level crossing gates and a plaque.

1849 Known as the Stafford Road Works it was opened by the Shrewsbury and Birmingham Railway in 1849 to maintain bought-in locomotives. It became the workshop of the Northern Division of the Great Western Railway in 1854 under Joseph Armstrong who had been in charge of maintenance for the Shrewsbury and Chester Railway at Saltney. The first broad gauge line arrived at Wolverhampton and the running shed was rebuilt. Locomotive repairs were concentrated in Wolverhampton, while carriage and wagon work was transferred to Saltney.

Joseph Armstrong was promoted to Swindon in 1854 and his brother George Armstrong succeeded him. Wolverhampton became responsible for building standard gauge locomotives independently of Swindon and was expanded in 1858.

First to be produced were two 2-2-2 locomotives, 1859 designed by Joseph Armstrong. In 1875 Swindon were building and repairing standard gauge engines, however Wolverhampton was frustrated by a variety of different locomotives from the various lines that had been taken over. Much of its work, therefore, was in rebuilding and standardisation. However its independence showed when it turned out superficially similar engines to those produced in Swindon that, nevertheless had detail differences. In particular, while the livery of Swindon engines was leaf green and oak brown frames, Wolverhampton's were dark Blue-green with red-brown frames.

1889 When broad-gauge was abolished Swindon took over as the main locomotive builder. However Wolverhampton continued to build small tank locomotives.

1908 After producing some 800 standard gauge locomotives, all new building ceased in 1908. The works continued to repair and overhaul all classes of locomotive from the humble tank engine to the King class and BR Standard locomotives until it closed in 1964.