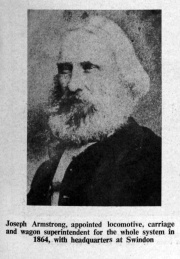 1875. The 'Sir Alexander' engine for the Great Western Railway.

Joseph Armstrong (1816-1877) was a British locomotive engineer and the second locomotive superintendent of the Great Western Railway.

Armstrong was born at Bewcastle, Cumberland and went to Bruce's School.

Joseph Armstrong was born at Bewcastle, Cumberland, on the 21st of September, 1816, his father being a yeoman who emigrated to Canada in the year 1817, taking with him two of his three sons, of whom Joseph was the third. The family returned about four years later, the father having been unsuccessful.

Once more on his native soil, Joseph Armstrong’s first employment was as a boy at the pumping engine under Robert Hawthorn, engineer, Walbottle Colliery, in Northumberland, the same in which George Stephenson and Timothy Hackworth had laboured. Here he evidently imbibed his taste for mechanical science.

In the year 1836, at the early age of twenty, he became an engine-driver on the Liverpool and Manchester Railway, acting under Edward Woods, M.Inst.C.E. This position he retained until 1840, when he entered the service of the Hull and Selby company, first as locomotive engine-man under John Gray, and subsequently as foreman of the running-engine shed and repairing shop at Hull under Thomas Cabry, where he remained until 1845, when he was appointed a foreman on the London and Brighton Railway, again under Mr. Gray.

His connection with the Brighton Company does not appear to have afforded sufficient scope for his abilities, for towards the close of 1847 he moved to Chester to take charge of a district of the then Shrewsbury and Chester line, acting as second to Edward Jeffreys, M. Inst.C.E., to whose position he succeeded in 1853 when that gentleman retired.

On the amalgamation of the Shrewsbury and Birmingham and the Shrewsbury and Chester lines with the Great Western system in the year 1854, Mr. Armstrong was appointed superintendent of the northern division of the locomotive department, under Mr. (now Sir D.) Gooch, his charge including a section of the broad gauge.

Subsequently, when, in 1863, the West Midland became absorbed into the Great Western system, the locomotive department was divided into two sections, the narrow-gauge districts being placed under the charge of Edward Wilson, M. Inst.C.E., Mr. Armstrong retaining the charge of the northern division under that gentleman, at the same time continuing his service under Mr. Gooch as superintendent of the Birmingham district of the broad gauge.

In 1864, Mr. Gooch and Mr. Edward Wilson retired, and Mr. Armstrong was, in the month of June of that year, appointed chief superintendent of the locomotive, carriage, and wagon department of the whole line, a position which he retained until his death. The responsibility of this office may be inferred from the fact that he had to provide all the new engines, carriages, and wagons, in addition to a variety of other work, required for the Great Western company’s system of more than 2,000 miles of railway, the total number of men employed in his department being twelve thousand nine hundred. Here he demonstrated a capacity for combination, order, and rule, united with a mastery of the profession seldom equalled and more rarely excelled.

An instance of his self-reliance and vigorous mind was afforded in 1871. When the Great Western board were considering the question of altering the gauge of the South Wales line, Mr. Armstrong undertook to construct, with the appliances then at his command, the whole of the stock required for this purpose within a period of eighteen months;- the broad-gauge stock to be replaced being equal to about one-sixth of the entire stock of the company, the whole expenditure on account of this work to be charged against revenue.

This undertaking, on the part of a competent and deservedly trusted officer, doubtless was of material assistance to the Directors in making their decision. It may be mentioned that this notable engineering feat was successfully carried out in its entirety, the conversion of the gauge over the whole line and branches from Swindon to Milford Haven being completed by Mr. Armstrong’s colleagues of the permanent way department within the single month of May 1872.

From his position as head of the great mechanical establishment which forms the principal feature of the town, Mr. Armstrong was naturally a prominent man in Swindon, and was greatly loved and respected there. Impressed with the many advantages of clubs and institutes for the working classes, he took an active interest in the Swindon Mechanics’ Institute, and was ever ready to help it with his advice and with his purse.

He was one of the Directors of the Swindon Water Company, and also for many years Chairman of the Local Board of New Swindon, which thriving locality owes much of its present prosperity to his indefatigable efforts on its behalf. He was the promoter of the Accident Hospital, and in fact identified himself with every institution in the district of a character calculated to illustrate the Benthamic principle of the greatest happiness for the greatest number.

The leading characteristics of Mr. Armstrong’s mind were energy and boldness, allied to an almost chivalric devotion to duty. Clear of vision, he saw the object he sought to attain, and straightway he set about the most direct manner of getting it. As an officer of the Great Western railway he was most upright and conscientious; and it said of him, that he would dispute a sixpence if he thought the company was being wronged, whilst in his private expenditure he was most munificent and liberal. As illustrative of this, it is related that it once became his duty, for some fault, which as locomotive superintendent he could not overlook, to discharge a man with a large family. Some pressure was brought to bear upon him to reinstate the man, to whom the loss of his situation was fraught with most serious consequences. He was, however, inflexible; but knowing privately the circumstances of the family, he for some considerable time afterwards supported them out of his own purse.

His duty to the company he served in his opinion necessitated the example, whilst his kindly benevolence prevented the inevitable misery which he knew would follow. Being one of those to whom work is the salt of life, Mr. Armstrong could with difficulty be persuaded to take the necessary relaxation from his arduous avocations, and for some time previous to his death it had become evident that his constitution was gradually weakening; but at the earnest solicitation of numerous friends and of the directors of the company he had consented to take a three months leave of absence.

Acting under medical advice he went to Matlock Bath, but had scarcely arrived there when alarming symptoms indicated softening of the brain. To this he succumbed on the 5th of June, 1877, in the sixty-first year of his age.

Even in the annals of the engineering profession, so fruitful of men who have risen from humble spheres to positions of great public importance, there are few records of a more successful and honourable career than that of Joseph Armstrong, and very few men have died more universally or deservedly respected.

Mr. Armstrong had been a Member of the Institution of Mechanical Engineers for many years, and he was one of the Members of Council of that body; but his connection with this Institution was of recent date, he having only been elected a Member on the 10th of April preceding his death.

JOSEPH ARMSTRONG was born at Bewcastle, Cumberland, on 21st September 1816, and was first employed under Mr. Robert Hawthorn at the pumping engine at Wallbottle Colliery near Newcastle-on-Tyne, the same colliery at which George Stephenson and Timothy Hackworth had laboured.

In 1836 he became an engine-driver on the Liverpool and Manchester Railway, and retained that position until 1840, when he went to the Hull and Selby Railway, first as locomotive engineman and afterwards as foreman of the running shed and repairing shop at Hull.

When these were amalgamated with the Great Western Railway in 1854, he was appointed superintendent of the northern division of the locomotive department at Wolverhampton; and in 1864 went to Swindon as chief superintendent of the locomotive, carriage, and wagon department of the whole line, which position he retained until his death, providing all the new engines, carriages, and wagons required for the Great Western system of more than 2,000 miles of railway, and employing in his department upwards of 12,000 men.

When the alteration of the South Wales line from the broad to the narrow gauge was under consideration in 1871, he undertook to construct within eighteen months the whole of the new rolling stock required for this purpose, amounting to about one-sixth of the entire stock of the company; this he successfully accomplished, the whole of the cost being charged to revenue account.

He was a director of the Swindon Water Company, and for many years chairman of the Local Board of New Swindon; he was a promoter of the Accident Hospital, and identified himself with every institution intended for the advantage of the working classes.

He continued in the active discharge of his many and arduous duties until within a very short period of his death, which took place at Matlock Bath on 5th June 1877, in the sixty-first year of his age.