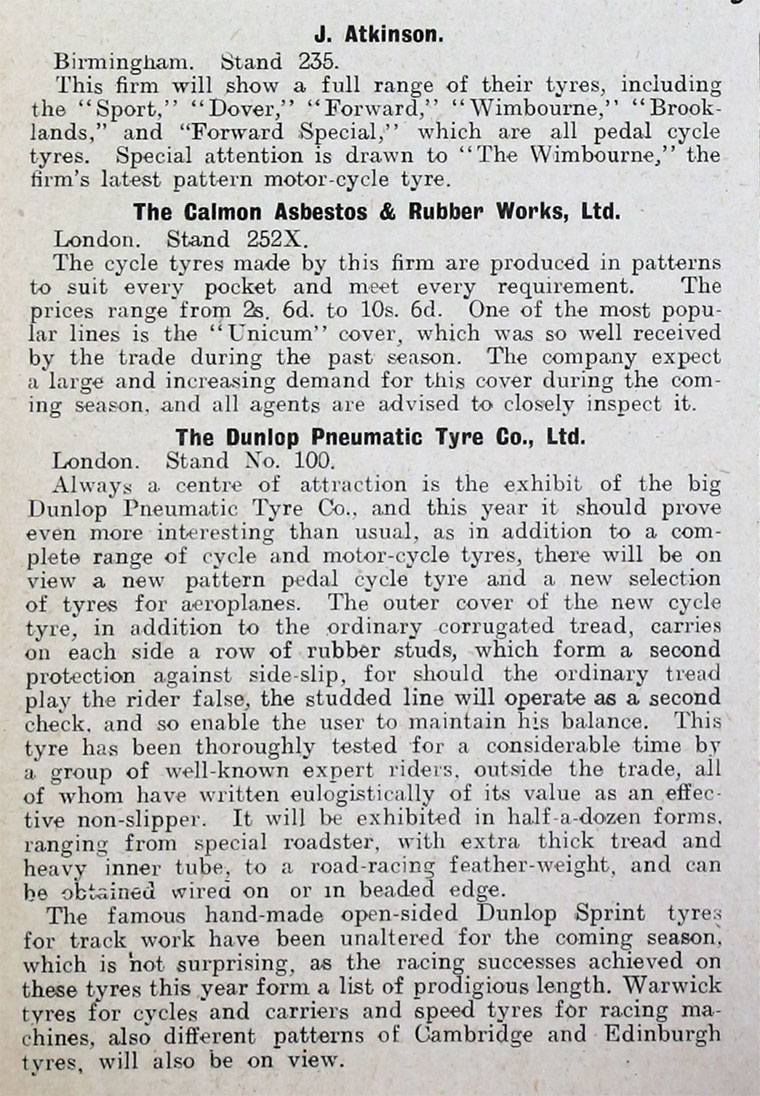 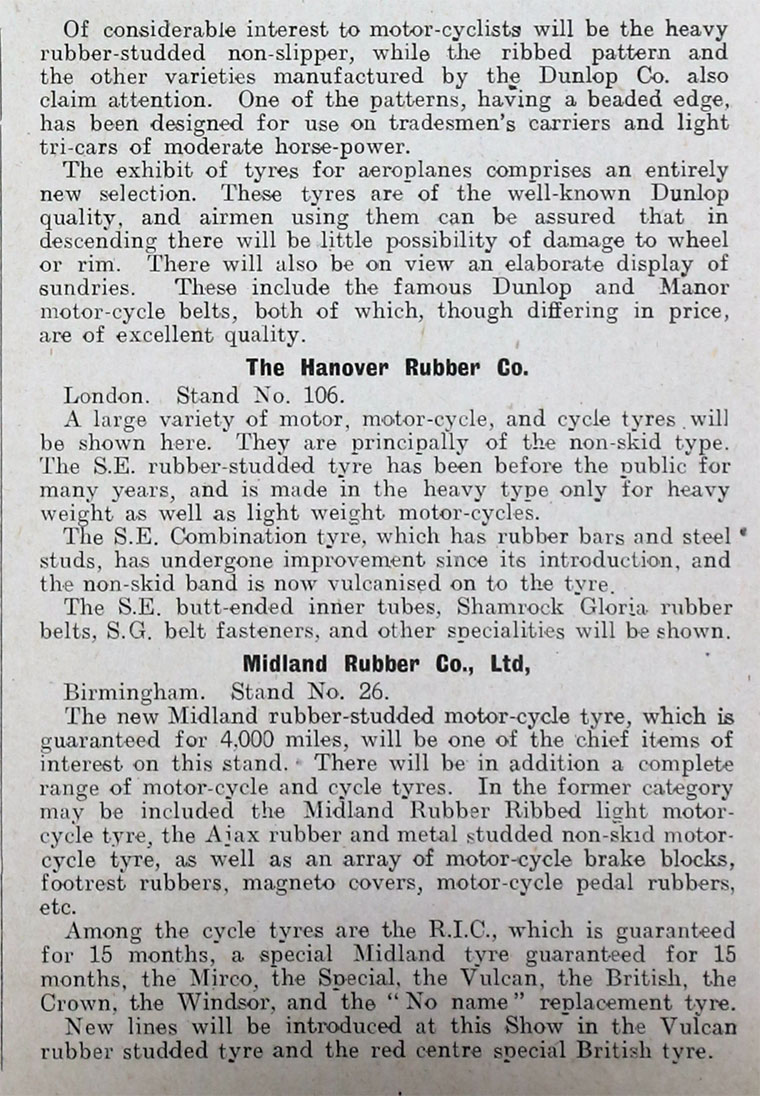 Note: This is a sub-section of the 1910 Stanley Show

J. Atkinson.
Birmingham. Stand 235.
This firm will show a full range of their tyres, including the "Sport," "Dover," "Forward," "Wimbourne," "Brooklands," and "Forward Special," which are all pedal cycle tyres. Special attention is drawn to "The Wimbourne," the firm's latest pattern motor-cycle tyre.

The Calmon Asbestos and Rubber Works, Ltd.
London. Stand 252X.
The cycle tyres made by this firm are produced in patterns to suit every pocket and meet every requirement. The prices range from 2s. 6d. to 10s. 6d. One of the most popular lines is the "Unicum" cover, which was so well received by the trade during the past season. The company expect a large and increasing demand for this cover during the coming season. and all agents are advised to closely inspect it.

The Dunlop Pneumatic Tyre Co., Ltd.
London. Stand No. 100.
Always a centre of attraction is the exhibit of the big Dunlop Pneumatic Tyre Co., and this year it should prove even more interesting than usual, as in addition to a complete range of cycle and motor-cycle tyres, there will be on view a new pattern pedal cycle tyre and a new selection of tyres for aeroplanes. The outer cover of the new cycle tyre, in addition to the ordinary corrugated tread, carries on each side a row of rubber studs, which form a second protection against side-slip, for should the ordinary tread play the rider false, the studded line will operate as a second check, and so enable the user to maintain his balance. This tyre has been thoroughly tested for a considerable time by a group of well-known expert riders outside the trade, all of whom have written eulogistically of its value as an effective non-slipper. It will be exhibited in half-a-dozen forms, ranging from special roadster, with extra thick tread and heavy inner tube, to a road-racing feather-weight, and can he obtained wired on or in beaded edge.

The famous hand-made open-sided Dunlop Sprint tyres for track work have been unaltered for the coming season: which is not surprising, as the racing successes achieved on these tyres this year form a list of prodigious length. Warwick tyres for cycles and carriers and speed tyres for racing machines, also different patterns of Cambridge and Edinburgh tyres, will also be on view. Of considerable interest to motor-cyclists will be the heavy rubber-studded non-slipper, while the ribbed pattern and the other varieties manufactured by the Dunlop Co. also claim attention. One of the patterns, having a beaded edge, has been designed for use on tradesmen's carriers and light tri-cars of moderate horse-power.

The exhibit of tyres for aeroplanes comprises an entirely new selection. These tyres are of the well-known Dunlop quality, and airmen using them can be assured that in descending there will be little possibility of damage to wheel or rim. There will also be on view an elaborate display of sundries. These include the famous Dunlop and Manor motor-cycle belts, both of which, though differing in price, are of excellent quality.

The Hanover Rubber Co.
London. Stand No. 106.
A large variety of motor, motor-cycle, and cycle tyres .will be shown here. They are principally of the non-skid type. The S.E. rubber-studded tyre has been before the public for many years, and is made in the heavy type only for heavy weight as well as light weight motor-cycles.

The S.E. Combination tyre, which has rubber bars and steel studs, has undergone improvement since its introduction, and the non-skid band is now vulcanised on to the tyre.

The Michelin Tyre Co., Ltd.
London. Stand No. 19.
The well-known Michelin tyres for pedal and motor-cycles will be found here in every variety of pattern, both wired and beaded edge. The cycle exhibit will include tandem covers (which are recommended as specially suitable for use on carrier cycles, as they will withstand the roughest treatment and heaviest work) and red rubber inner tubes, both ordinary pattern and Simplex, the last-named being double-ended. Among the motor-cycle tyres on view will be found the Michelin ordinary (light) covers, Trident (extra strong) covers, alSo the steel-studded Semelle non-skid covers, and ordinary and butted fed rubber inner tubes. Tyre accessories for both pedal cycle and motor-cycles will also be exhibited. One of the most interesting features of the exhibit will be the Simplex tubes, and visitors should not miss inspecting these.

The North British Rubber Co., Ltd.
Edinburgh. Stand No. 23.
This famous tyre firm will have one of the most comprehensive exhibits in the show. It will include the Clincher A. Won tyres, which are known wherever cyclists are to be found. The quality of this tyre leaves nothing to be desired, and it need only be mentioned that for 1911 it will, as hitherto, be up to the firm's usual standard. The Clincher Salvus tyre, which was introduced last season, has proved itself to be a very reliable non-skid. This quality is exactly the same as the A. Won, the chief difference being in the pattern of the tread. It is worthy of note that the General Post Office Authorities, after many exhaustive tests, adopted this tyre in large quantities for their messenger bicycles. The Clincher B tyre is highly recommended as a high-class low-priced tyre. The Clincher C is another tyre of good quality, retailing at a low price, and is far superior to many of the so-called cheap tyres on the market.

Clincher motor-cycle tyres have been known ever Since the introduction of the pastime of motor-cycling, and are known as being absolutely in the front rank of motor-cycle tyres. Four patterns are listed for 1911, and specimens of all these will be on view on stand No. 23.

Palmer Tyre, Ltd.
London. Stand No. 101.
There will be a most extensive arras. of cycle and motorcycle tyres on this stand, and particular attention is directed to the special cycle tyre with extra thick tread and extra thick ribs, to prevent side slipping, whirls will be shown. Palmer motor-cycle tyres with ribbed tread and rubber- studded tread. which are made on the famous airless cord foundation and Palmer fabric foundation will also be found. Agents should note that in addition to the usual sizes the Palmer Company supply a size to suit rims of foreign make, namely 650/65 mm.

The Silvertown and Buccaneer are two other cycle tyres of Palmer manufacture which will be shown by lie company. They are listed as second and third grade tyres respectively. The Buccaneer has a tread composed-of three square grooves, after the style of the well-known Palmer motor-cycle tyre. It 'has a ribbed tread, and is a most effective non-skidder.

J. Pedley and Son, Ltd.
Birmingham. Stand No. 98.
No representative cycle show would be complete without the exhibit of the well-known firm of J. Pedley and Son, Ltd.. the keynote of whose display, as always will be quality. All this firm's well-known brands of cycle and motor-cycle tyres will be shown, including the Oxford special (guaranteed for 10.030 miles), the Oxford, the State, the Colonial, the International, the Leicester, the Sackville, the Challenge. and the Vim. A special new line is the Pedley Three Rib Motorcycle lyre. which we would advise agents to inspect. Motorcycle agents will be interested in the New Pedley Three Rib tyre. specially moulded to riding shape so as to quickly fit on the rim, thus preventing nipping of the tube. Rubber sundries, such as brake blocks, canvas, tube connections, repair outfits, etc., will complete a most interesting exhibit.

The Peter Union Tyre Company.
London. Stand No. 25.
This firm's exhibit will include the "Peter Union" twin-ribbed double-grip rubber non-skid, steel-studded, and leather tread non-skid, and ordinary tread heavy pattern tyres, also puncture-proof bands, butt-ended and endless extra strong. inner tubes. The special attraction on this stand will be the Voiturette tyre, 650 by 65 mm., which is suitable for side-car work. There is an expanding market for a tyre of this type, and it should prove one of the Peter Union Co.'s best selling lines. The firm's all-rubber tyre, which has strong walls and thickened tread; the twin-rib double grip. a speedy tyre, and which at the same time is an excellent non-slipper, and the steel-studded type, which is well known_ for its long-wearing qualities, should all be closely inspected. Another line which should not be missed is the puncture- proof band. This band "acts up to its name," and, we learn, is greatly appreciated by users.

The Rom Tyre and Rubber Co. (1909), Ltd.
London. Stand No. 22.
The combination tyre, consisting of a double non-skid, viz.,. steel studs and diagonal rubber bars, which is so popular with motor-cyclists, will be exhibited here; also a side-car tyre, 26in. by 3in. to fit 26in. by 2in. rim, for use on heavy motor- bicycles with side car. This tyre has an extra heavy casing,. and can be supplied in any pattern of the firm's treads. A. rubber studded non-skid, made in heavy and light-weight patterns, is supplied for those who prefer an all-rubber non-skid. Other models on view will include rubber bar non-skid, corrugated and round treads, the last named being for racing purposes. Bands for re-treading, and tubes, both butt-ended and endless, will also be on view. The company draw special attention to their new side car tyre, and visitors to the Exhibition should make a point of inspecting it.

The See Band and Tyre Co., Ltd.
London. Stand No. 272 Annexe.
This firm will exhibit Margett's Sectional Pneumatic Tyre. This tyre is made in seven sections, and between each section is a cuff with a tapering ridge of rubber in the centre, which projects and completes the joint. The inflation of the air tube holds the cuff tight against the outer section, the ridge on the cuff forming a cushion between the sections and seals the joint from water, grit, stones, etc. The sections of the outer cover are composed of rubber and canvas in the ordinary way, but the canvas is on the straight instead of on the, bias, as is customary in other tyres; the rubber covers the canvas entirely outside, inside, and over the ends of the section. Amongst the numerous advantages claimed for this tyre is that of low maintenance cost, it being estimated from the experience of extensive trials that tyre cost is reduced by two-thirds.