A. Sanderson and Sons 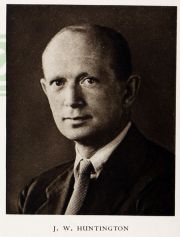 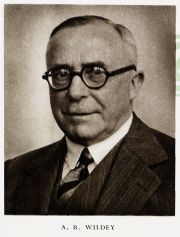 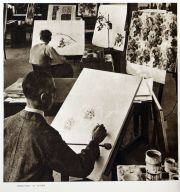 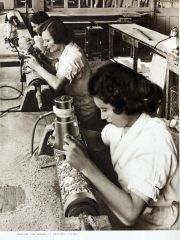 1860 Arthur Sanderson founded the firm. From his premises in Soho Square, London, he distributed American, French, Japanese and English products, becoming one of the leading wall covering merchants in Britain.

By 1865, the Sanderson family and business moved into larger premises at 52 Berners Street in London’s West End.

1879 It soon became evident that current sources of wallpaper could not meet the rising demand and changing tastes of the public. Conscious of this, Arthur decided to enhance the reputation of his house by manufacturing the designs which he acquired from English designers. He established his first wallpaper factory in Chiswick. Manufacturing of Sanderson wallpapers took place in an old militia depot at Chiswick, which he had equipped with two printing machines and several block tables. Initially, all printing was by hand, however the first surface-machine was soon installed.

1882 Arthur Sanderson died at the early age of fifty-two, leaving his business to his three sons, John, Arthur and Harold. Despite their youth the business prospered. The first printing machine was joined by seven more and the staff increased from 40 to 300.

The brothers erected a new larger and better equipped factory nearby.

1899 Amalgamated with Wall Paper Manufacturers. Arthur Sanderson and Sons Ltd. remained an independent company concerned with the merchanting of wallpaper as well as the manufacture and merchanting of fabrics.

In 1900 the well-known paper-staining firm, William Woollams, of High Street, Marylebone, went out of business; Sandersons acquired the blocks and designs, as they did in the case of the business of Charles Knowles & Co., purchased thirteen years later.

1923 by command of Her Majesty the Queen (later Queen Mary), the firm had the honour of producing a special wall paper for the Drawing Room at Buckingham Palace.

1924 The blocks, machines, and some of the designs of Jeffrey and Co., another old London paper-staining firm made famous by the vision of it proprietor, Metford Warner, were acquired by Sandersons.

A check in the fortunes was experienced in 1928, in the form of a disastrous fire which reduced the greater part of the building to a heap of ashes. A few machines were salvaged and production resumed to a limited extent a few weeks later.

1929 The London paint making plant of Arthur Sanderson and Sons was transferred to The Walpamur Company Ltd.

Moved to a factory at Perivale, Middlesex, for future expansion. Production commenced early in 1930.