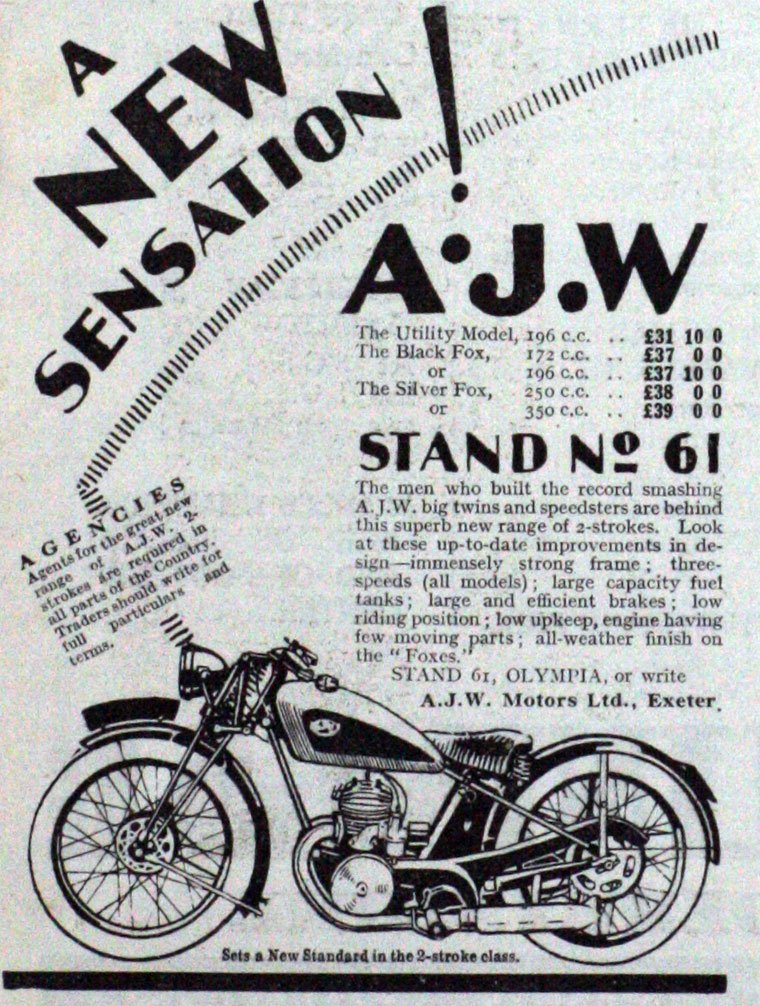 AJW Motors of Exeter produced motorcycles from 1926 to 1979.

The company was founded by Arthur John Wheaton and it was his initials that gave rise to the AJW name. The Wheaton family were involved with the printing trade and based in Exeter, Devon. Many of their machines were distributed by Pride and Clarke

1926 Business commenced with two ohv models. One had a 500cc MAG engine, the other was fitted with a 996cc V-twin British Vulpine. Both were similarly styled but only the twin went into production, fitted with a four-speed Jardine gearbox .

1928 There were now six models, some of which had a JAP engine and all had the option of a three-speed Sturmey-Archer gearbox instead of the Jardine. At the Olympia show the company announced the AJW Super Four. Radical in design, it had a water-cooled British Anzani engine, huge eight-inch drum brakes and wire wheels with four-inch balloon tyres.

1929 The Super Four was exhibited again at Olympia but it never reached the production line and was dropped.

1930 The range was extended using engines from JAP, Blackburne and Villiers. They were given names linked to foxes such as Silver Vixen and Flying Fox.

1931 Some of the triangulated frames had six tubes bolted or brazed to the headstock and Rudge Python engines were added.

1932 Other than one JAP V-twin engine, all the others were now Rudge and Villiers.

1934 Only three models were in production.

1939 A lightweight model, known as the Lynx, with a 249cc Villiers engine was added to the range.

1940 Company hit by bomb. '...last night broken by the vivid glare of fire - the second in the city within a little over 36 hours - which resulted in damage estimated at about £3,800 being caused in congested area at the rear of Fore-street. All that remained this morning of a motor-cycle assembly shop and paper store in Friernhay-street, adjoining the extensive printing works of Messrs. Wheaton and Co., was a smouldering heap of debris from which firemen were removing the twisted and heat-discoloured frames of motor-cycles....the upper floor being used tor the assembly of new motor cycles by Messrs. A.J.W. Motors Co., Ltd., carried on by Mr. G. Corby, of Whimple, in association with Mr. A. J. Wheaton, of Exeter....'[2]

1945 The firm changed hands when Arthur Wheaton sold to Jack Bell. Firstly it relocated to Bournemouth, Hampshire and then on to Wimborne, Dorset.

1948 Two post-war models were produced - both with JAP engines. The Speed Fox was built in small numbers specifically for speedway, while the Grey Fox, with its sv vertical-twin engine and telescopic forks was a road model.

1952 Two prototypes were exhibited and both had JAP engines set horizontally. Neither was particularly successful and shortly afterwards the JAP road-engine supply stopped.

1957 The Speed Fox speedway motorcycle went out of production.

1958 A new model known as the Fox Cub was launched. This was an imported lightweight motorcycle with a Minarelli two-stroke engine.

1959-1964 The Fox Cub continued together with three other versions.

1974 After a gap of a decade, AJW returned to the market with imported mopeds.

1976 The firm was now supplying a range of 50cc, 80cc and 125cc Italian-made, two-stroke Wolfhound machines