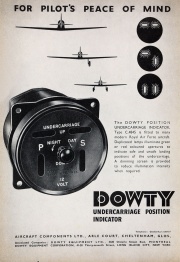 In 1931 George Dowty set up the Aircraft Components Co, his own one-man company while still employed by Gloster Aircraft Co. This was a shell company, registered at an accommodation address in London.

1931 On the 10th March he received his first order (for struts) from the Civilian Aircraft Co of Hull but this company went bankrupt before they paid for the goods. In May he received his first order for six internally sprung undercarriage wheels from Kawasaki and built these in premises at 10 Lansdown Terrace Lane in Cheltenham. Dowty resigned from the Gloster Aircraft Co at the end of June.

1932 Business converted into a private company in September 1932.

1934 A major breakthrough occurred when a pair of oleostruts of new design was accepted for the Gloster Gauntlet aircraft. This gave Dowty his first large production order and was followed by a similar order for the Gladiator. Dowty leased a factory and bought Arle Court, Cheltenham as the location for his factory, with spare land that could be used as an airfield.

1936 Public limited company registered with the same name to acquire the assets and business of the company, including 50 patents. Dowty himself only held a small percentage of the equity. The products of the business were aircraft landing equipment including retractable and non-retractable wheels and hydraulic flaps and shock absorbers[1]. A. W. Martyn, founder of Gloster Aircraft Co was appointed chairman of Aircraft Components Ltd[2].