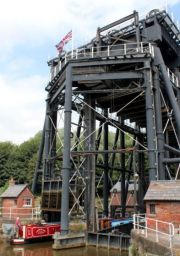 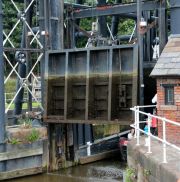 Looking from the aqueduct towards the River Weaver. The building below the aqueduct originally housed the boilers and pumping machinery

The nearest trough is descending 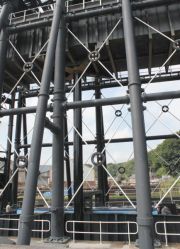 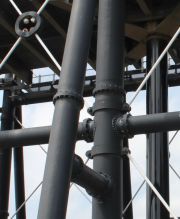 This shows the redundant pulleys and 6 ft diameter gears, and their supporting structure 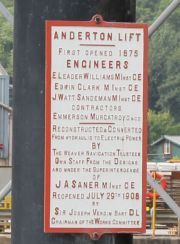 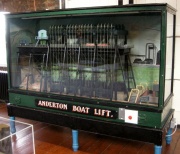 The Anderton Boat Lift is near the village of Anderton, Cheshire, CW9 6FW.

Provides a 50-foot vertical link between two navigable waterways: the River Weaver and the Trent and Mersey Canal.

Built in 1875 using hydraulic rams to lift water-filled caissons or troughs that carried the canal boats.

The original form of the lift as designed by Edward Leader Williams and Edwin Clark , was described and illustrated in 'The Engineer' in 1880.[1]. It was important before raising each trough that it contained water to a depth of 4 ft 6", no more and no less. This was achieved using simple syphons, described in the article in The Engineer. There were 12 syphons per trough, and each was in the form of a pipe of inverted 'J' shape. The short leg of the inverted J dipped into the trough, while the longer leg was outside the trough and opened at a level near the bottom of the trough. As it descended into the water-filled pit, water rising up the pipe pushed air out of the syphon into the trough. Then, when the trough was rising, a vacuum would be drawn in the syphon, and this would 'pull' water out of the trough until the trough's water level fell to break the vacuum.

For balance and minimum power consumption there were two parallel troughs, one rising while the other descended, although the lifts could be operated independently. Each trough had just one central ram, 3 ft diameter. Each ram and its cylinder were assembled by bolting together three sections. The troughs were guided by cast iron blocks at the four corners, moving in guides in the vertical columns. Movement of water from one ram to the other provided 11/12ths of the lift, the final part being provided by a steam driven hydraulic pump via an accumulator. The hydraulic pressure was 550-670 psi.

The top of the hydraulic cylinders was below the level of the water-filled pit into which the troughs descended. A wrought iron-lined tunnel below this pit provided access to the top of the cylinders, where pipes, valves, and the rams' gland packing was located. A balance valve between the two cylinders was operated from the high level control room by a shaft, changing direction where necessary using bevel gears.

1882 Failure of one of the iron castings at the top of the hydraulic cylinders resulted in a 6 month closure. Corrosion problems continued to plague the lift. Copper was used for inserts for repairs where corrosion grooving had occurred, and the situation was worsened due the presence of iron, copper and heavily contaminated canal water led to acute electrolytic corrosion. It was decided to abandon the use of canal water and use pure water obtained by condensing the steam from the engine. This, together with converting the engine from a simple two cylinder to a compound engine, also improved engine efficiency, thereby reducing coal consumption. The work involved in carrying out repairs to the rams and cylinders must have been very challenging.

Corrosion was arrested, and things were satisfactory until 1902, when problems emerged with boiler corrosion. It was therefore decided to abandon the steam plant and use electrically-driven pumps, with the motors and pumps supplied by Mather and Platt.

However, problems with leaks and concerns about the structure itself led to a major rethink. Starting in 1906, major alterations commenced. The hydraulic system was abandoned and replaced by a system using cables and counterweights with geared electric motor drives. The framework and foundations were also extensively revised. The lift was only closed for three periods during these two years, for a total of 49 days.

2001 Restoration started. The counterweighted system was abandoned, and operation by hydraulic rams was reintroduced.

For a good account of the lift and its history, see Wikipedia entry.

Summary of the Changes

As built, the troughs were each raised and lowered by a single large hydraulic ram. The structure surrounding the troughs was minimal in extent, as is well illustrated in the fascinating old photo here[2].

In 1906-8, corrosion problems led to the abandonment of the steam-hydraulic system in favour of a counterweighted system using electric motors. This necessitated constructing a massive steel structure and making stronger foundations. By reference to the old photo linked above, it appears that the original cast iron columns have been retained to guide the troughs at their corners. The original ties and cross bracing between these columns have also been retained. It also appears that the troughs and approach aqueduct are original, although the aqueduct has been strengthened by adding additional cross beams and vertical webs between the originals.

Originally the aqueduct crossed the Anderton Basin, but this has been filled in.

In 2001 the system reverted to the use of hydraulic rams for elevating the troughs.

The work was led by J. A. Saner, Engineer to the River Weaver Navigation Trustees.

The wrought iron aqueduct leading to the lift was retained, along with the lifting gates at the end. The gates were now operated electrical rather than by hand-worked crabs (winches).

Extensive groundwork was undertaken, including the introduction of a dry dock beneath the troughs.

The Weaver Navigation Yard at Northwich undertook most of the fabrication and machining work. They made the main columns with steel tube from the Mannesmann Tube Co. Plates and rolled sections were from the Shelton Iron and Steel Co. The main gears were cast by P. R. Jackson and Co of Salford (1 ft dia double helical pinions, 6 ft dia wheels). Most of the iron castings, including counterweights and bearing pedestals, were from Cleghorn and Wilkinson of Northwich. Brass castings were from Sykes and Harrison of Manchester.

The massive framework supporting the counterweights via pulleys and drive gears, was supported on the vertical columns via spherical bearings (see photo #). The female part of the bearings was cast iron bolted to the frame, and the male part was cast steel, using castings from Edgar Allen of Sheffield. The machining of the spherical surfaces was done at the Weaver Yard on a conventional lathe, using a template follower, with the surfaces being finally ground together.

The main 30HP electric motors were supplied by the British Electric Plant Co of Alloa. Small electric motors were supplied by Royce. Existing 110V motors were upgraded to 440V by Mather and Platt. The main motors ran at 750 rpm. Wormgears, bevel gears and the herringbone gears reduced the pulley shaft speed to 0.5 rpm. There was 'an absence of noise and backlash, the humming of the electric motor only being noticeable'. Only 8 HP was needed for normal operation, reserve power being available in the event of differing water levels in the troughs (causing imbalance).

It appears that the original wrought iron troughs and aqueduct were retained.

A superb, comprehensive account of the boat lift's history, design, construction, and operation was published in 2000, before the recent reversion to hydraulic operation[4]