Grace's Guide is the leading source of historical information on industry and manufacturing in Britain. This web publication contains 150,094 pages of information and 235,418 images on early companies, their products and the people who designed and built them. 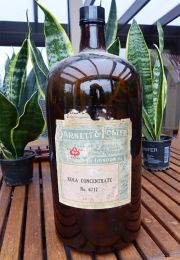 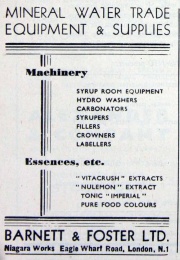 1870 Frederick Foster became a partner of Mr. Sampson Barnett (sic), Hoxton; the firm became Messrs. Barnett and Foster; Foster devoted his attention to the improvement of aerated-water machinery. Barnett pulled back from active involvement in the firm[1]

1882 Exhibited at the Naval and Submarine Exhibition the two main types of breathing apparatus for divers - air supplied from the surface, and a self-contained supply carried by the diver; Barnett and Foster were the only one of 7 firms exhibiting who showed both types of apparatus.

1885 "NOTICE is hereby given, that the Partnership which was carried on by Samson Barnett and Frederick Foster, under the firm of Barnett and Foster, from the 1st January, 1880, to 3lst December, 1882, at 23, Forston-street, Hoxton, in the county of Middlesex, and on and after 1st January, 1883, first, at the same place, and subsequently at 20, Eagle Wharf-road, Hoxton aforesaid, in the trade or business of Engineers, has been dissolved, as and from the 31st day of December, 1884, by mutual consent; and that all assets will be received and debts and liabilities discharged by the said Frederick Foster, as on and from the last-mentioned date. The business will in future be carried on under the same style of: Barnett and Foster."[3]

1934 Company incorporated to acquire the partnership of Barnett and Foster.