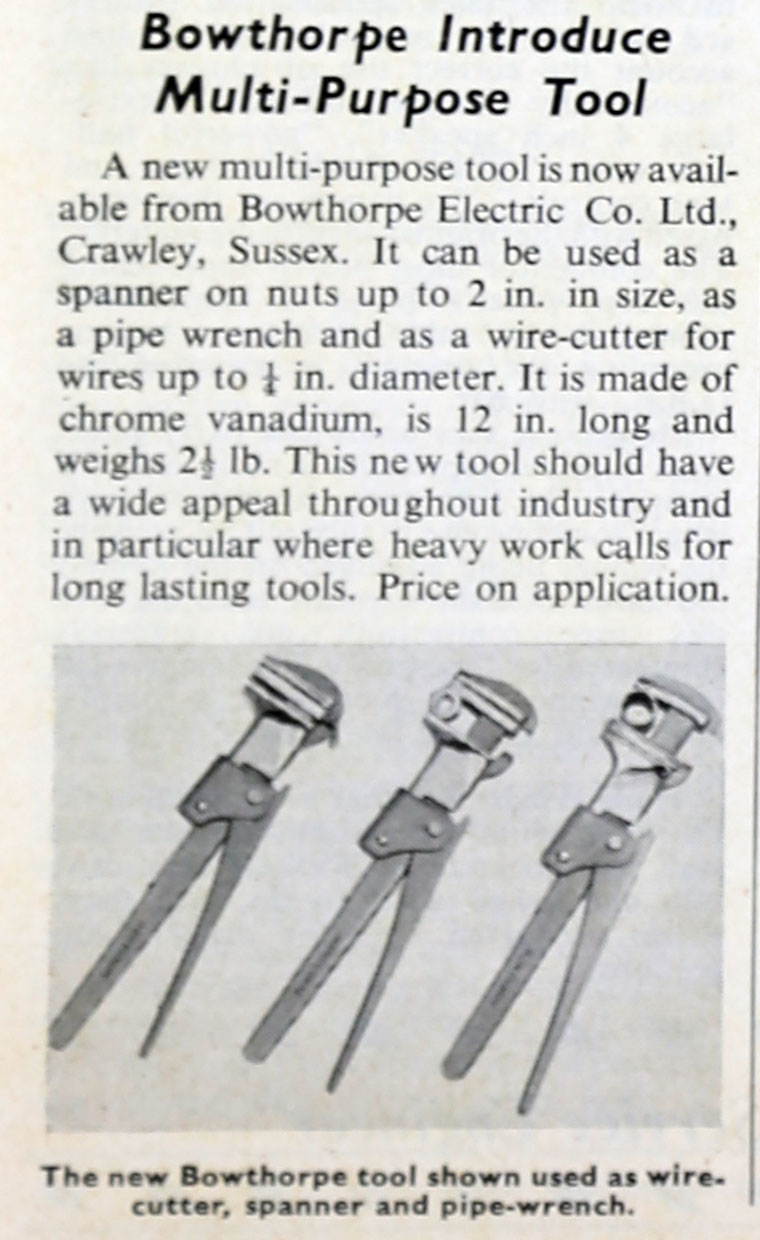 1936 The company was founded by Jack Bowthorpe as Goodlife Electrical Supplies.

1938 Hellermann Electric was founded in Croydon by Paul Hellermann and Jack Bowthorpe as a subsidiary of Goodlife.

1938 On repayment of the loan he had used to establish the business, he set up Bowthorpe Electric Ltd with the help of Park Trust Ltd (Lord Doverdale's family trust).

The business was operated from a garage in 8, Eagle Street, London, W.C.1., cutting up electrical wiring into standard lengths and selling it to the aircraft industry. One of the first to use coloured sleeving to identify cabling. Initially Ray Parsons was the sole employee; together they built the Company into one of the UK's largest electrical businesses.

1949 Changed its name to Bowthorpe Holdings.

1970 After failing in a battle to acquire Falks, bought that company's Switchgear and Equipment subsidiary from the new owners; this was merged with Bowthorpe's business in similar technology[5]

1973 Sold the power equipment division, with factories at Bridgend and Banbury, to Brush Switchgear[6]. Acquired Hiatt and Co of Birmingham, cable accessory manufacturers[7], and Fellbridge Engineering of Susses[8]

1977 Moved Bowthorpe electric division from Crawley and EMP Electric from Tottenham to new factory in Brighton, with both forming a new unit Bowthorpe EMP[9]

1982 Acquired William McGeoch and Co of Glasgow[11]. Rights issue to raise funds to make acquisitions in the USA of high technology firms in a deliberate move to introduce new business areas into the company[12]

Acquired c.18 companies over 5 years; then needed a rights issue to pay for future expansion [13]

1988 Major interest acquired in Cambridge Medical Group as a deliberate move into medical technology[14]. Had made seven acquisitions since the 1987 rights issue[15]

1990 It disposed of its defence businesses

1992 Acquired Penny and Giles, maker of aircraft "black boxes"[16]; this was Bowthorpe's largest ever acquisition

1996 The company started to move firmly into the telecom's equipment sector; its electronics business grew rapidly during the dot-com boom of the 1990s, with the 1997 purchase of businesses such as Adtech, a digital test equipment concern based in Hawaii.

The company was re-organised into 5 specific areas, including telecoms testing equipment.