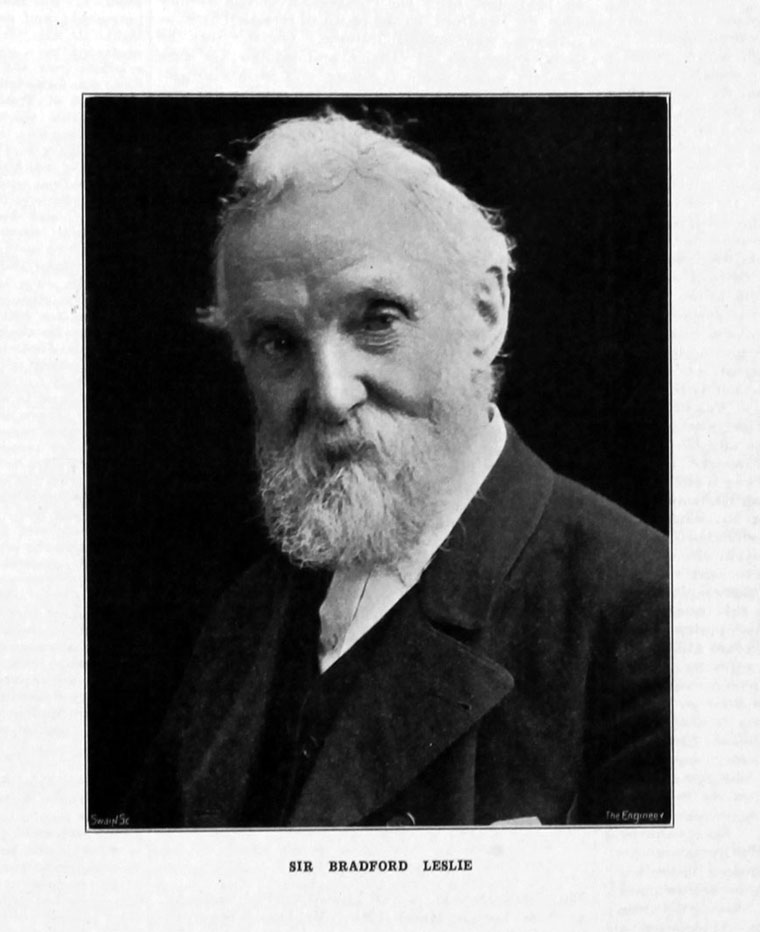 1831 Born the son of the American painter Charles Robert Leslie, ultimately Professor of Painting at the Royal Academy in London.

Bradford Leslie also designed the floating pontoon bridge across the Hooghly in Calcutta, which was replaced by Howrah Bridge in 1942, and the Gorai River Railway Bridge near Kushtia in Bangladesh.

"It is with great regret that we have to record the death of Sir Bradford Leslie, which took place in London on Sunday last. To the rising generation of engineers Sir Bradford was comparatively unknown, saving by name, for he was born as long ago as August, 1831, and had nearly concluded his ninety-fifth year at the time of his death; yet from the middle to the end of last century, and, indeed, will into the present century, he was famous as one of the most distinguished, as well as the most daring, bridge builders that this country has ever produced. Read More.

After having received a classical education at the Mercers’ School, he was apprenticed, at the age of 16, to Mr. I. K. Brunel, M. Inst. C.E., for a period of 5 years. During this time he acted as assistant engineer on the erection of the Chepstow bridge over the Wye, on the Dock branch of the Gloucester and Dean Forest Railway, and at the Saltash bridge (where he was in charge of the sinking of the central 35-foot diameter pier caisson by compressed air), on which work he remained until 1855.

He supervised for Brunel the erection of the Stony Creek and Salt Water River bridges and other works for the Victorian Railways.

On his return to England he superintended the construction of heavy forgings for the framing, rudder, engines, anchors, chain-cables, etc., of the SS Great Eastern, and assisted in the arrangements for launching that vessel.

In 1858 he entered the service of the Eastern Bengal Railway Company, to which Brunel was consulting engineer, acting under W. Purdon, M. Inst. C.E., in the capacity of resident engineer in charge of large bridges and viaducts. In the course of this work he supervised the construction of the Ichamati and Kumar river bridges, which were carried on caissons founded by compressed air.

He returned to England in 1862 and was engaged as Principal Engineer for the construction of the Ogmore Valley Railway in South Wales. On the completion of this work 3 years later, he re-entered the service of the Eastern Bengal Railway Company as Chief Resident Engineer for the construction of the Goalundo extension. This line, which was completed in 1871, involved the bridging of the Gorai river; and the well-known Gorai bridge marks the first of his bridge-building achievements in the Indian Empire.

It consisted of seven 185-foot spans, supported on eight piers having two iron cylinders each; and was remarkable for the ingenious boring gear used to sink the cylinders to a depth of nearly 100 feet.

For his Paper describing this work, which was read in 1872, he was awarded a Telford medal and premium.

On the completion of the Goalundo line, he was deputed to inspect the bridges over the Beas, Jumna, and Sutlej on the Oudh and Rohilkund Railway, and others on the Sind, Punjab and Delhi Railway, in consequence of damage caused by exceptionally severe floods. His investigations showed that the costly remedies proposed during the alarm which resulted from these accidents was unnecessary.

For some time he had been considering the question of constructing a road bridge over the Hooghly river between Calcutta and Howrah, and had prepared designs for, and modelled parts of, a floating bridge, which type he considered would best meet the difficult conditions existing in that river. Lord Mayo, the Viceroy, had been very favourably impressed by the scheme, when he examined the plans and models on the occasion of the opening of the Gorai bridge in 1871. In spite of considerable opposition, construction was sanctioned, and the bridge was completed in 1874 under Sir Bradford’s direction. It was 1,530 feet long and 62 feet wide, carried on fourteen pairs of rectangular iron pontoons, 160 feet long, 10 feet wide, and 8 to 11 feet deep, and a 200-foot opening was provided for the passage of ships. He described this work in a Paper read before The Institution, for which he received a Watt medal and Telford premium.

He subsequently completed water supply and drainage works in progress in Calcutta, having been appointed Municipal Engineer before the completion of the bridge.

After 2 years’ municipal work, however, he joined the East Indian Railway, being appointed Agent and Chief Engineer in 1876.

Among the innovations which he introduced were the use of cast-iron plate sleepers, the employment of native drivers for goods-trains, and the utilization of scrap material for structural purposes. On a proposal being made to carry the railway across the Hooghly at Naihati, in order to give access to Calcutta and the Kidderpore docks, he designed an arch bridge, which he proposed to construct of scrap rails. This design, however, was abandoned in favour of one comprising a central double cantilever 380 feet 6 inches long, carried on two piers 120 feet 6 inches apart, and two shore spans each 420 feet long supported by the central cantilevers, and caisson piers at the shore ends. This structure, known as the 'Jubilee' bridge, was opened in 1887, Sir Bradford being created a Knight Commander of the Order of the Indian Empire in recognition of his work as Chief Engineer. For his Paper describing this structure he was awarded a George Stephenson medal and Telford premium.

Repeated attacks of malaria and family bereavements, however, had undermined his health, and he was invalided to England in 1887. On the journey he was shipwrecked off Corsica, and while carrying up a companion-way the younger of his two orphan granddaughters, who were accompanying him, he fell and injured a knee, from which injury he never fully recovered.

He acted as a British juror at the Paris Exhibition of 1889, and was created 'Offcier de l’instruction publique' by the French government.

He became closely associated with Indian affairs again in 1895, when he was appointed Chairman of the Southern Punjab Railway Company.

The floating bridge over the Hooghly was at that time becoming inadequate to meet the demands of increased traffic, and he paid a brief visit to India in 1899 to gain consideration of his proposals for a new design. It was not until 1910, however, that a committee of engineers was formed to consider the question of renewing the bridge, and in 1915 he submitted, at their invitation, plans for a new bridge. This design, which consisted of twin floating bridges, was, however, not favoured. He was a vigorous critic of the cantilever design selected by the Committee.

He was elected a member of The Institution in 1872, and became a member of Council in 1889, on which he served continuously until 1895. In addition to the Papers already mentioned, he contributed to the Proceedings a communication 'On an Improved Method of Lighting Vessels under way at Night.'

He married in 1855 Mary Jane Eliza, daughter of W. Honey, M. Inst. C.E. His wife and three daughters predeceased him, and he was survived by one daughter and by his only son, Sir Bradford Leslie, O.B.E., M. Inst. C.E. He died in London on the 21st March, 1926.