1853 model of paddle wheels and engines at the London Science Museum, 2016 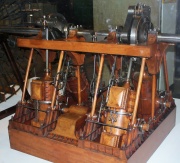 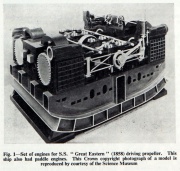 The Launch of the Great Eastern 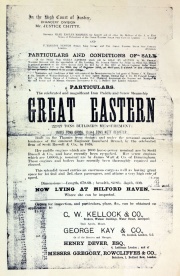 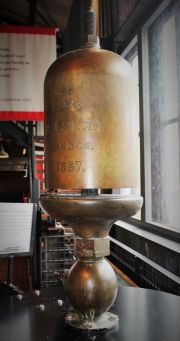 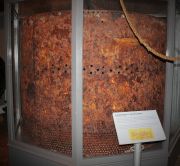 Remaining part of the No. 1 funnel which suffered an explosion, on display at the SS Great Britain Museum. It had been used as a strainer in a well shaft at Sutton Poyntz pumping station in Dorset, and was recovered and donated by Wesses Water 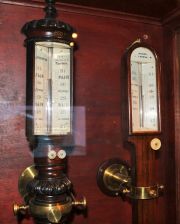 On the left is a marine barometer from the SS great Eastern, made by John Crichton (London), on display at the SS Great Britain Museum

At the time of her launch, in 1858, she was by far the largest ship that had been built, and had the capacity to carry 4,000 passengers around the world without refuelling.

'She has made in all eight or ten trips with passengers across the Atlantic. She has carried troops to Quebec. In 1863 she knocked a hole 83ft. long in her bottom on Montauk Point. In 1860 she encountered the storm in which she lost her paddles and broke her rudder head. A sensational story was told at the time about the fitting of jury steering gear by an American engineer, Mr. Towle, which, like many other sensational stories, is not true.' [1]

1854 Brunel entered into a partnership with John Scott Russell, an experienced Naval Architect and ship builder, to construct the Great Eastern. She was built by Scott, Russell and Co's Napier Yard at Millwall, London, the keel being laid down on May 1, 1854.

Unknown to Brunel, Russell was in financial difficulties. The two men disagreed on many details. It was Brunel's final great project, and he collapsed from a stroke after being photographed on her deck, and died only ten days later, a mere four days after Great Eastern's first sea trials.

The hull was an all-iron construction, a double hull of 0.75 inch wrought iron in 2 ft 10in plates with ribs every 6 ft. Internally the hull was divided by two 350 ft long, 60 ft high, longitudinal bulkheads and further transverse bulkheads dividing the ship into nineteen compartments.

1857 'THE "GREAT EASTERN" MONSTER SHIP - Mr. S. Beale, deputy-chairman of the Midland Railway Company, and whose name has long been honourably connected with the industrial and mercantile pursuits of this country, is now supplying Messrs. Scott, Russell, and Co., the builders of the monster ship, with immense iron plates to be used in her construction. The plates have been expressly rolled for the bows of the "great ship" at Millwall, and vary in size from 2 tons to 2½ tons, the largest plate being 27 feet long by 4 feet 3 inches wide, and 1¼ inch thick. The rough plates from which these beautifully finished plates were cut out were of course much larger. The plates, which have been planed, are quite free from blisters and blemishes, the edges are perfect, and altogether they are an admirable specimen of what can be effected in these days of progress by enterprise, ingenuity, and skill. The difficulty of rolling these immense masses of iron was enormous. The process is this : — Between 3 and 4½ tons of iron are bound together, and placed in a furnace expressly constructed for the purpose, and, after the iron has been heated to a white heat, it is withdrawn and carried to the rolls, and, by admirable mechanical arrangement, rolled into plates. — Derby Reporter.'[2]

The Great Eastern was the first ship to incorporate the double-skinned hull, a feature which would not be seen again in a ship for 100 years, but which is now compulsory for reasons of safety. She had sail, paddle and screw propulsion. The paddle-wheels were 56 ft in diameter and the four-bladed screw-propeller was 24 ft across. The power came from four steam engines for the paddles and an additional engine for the propeller. Total power was estimated at 8,000 hp. She had six masts (said to be named after the days of a week - Monday being the fore mast and Saturday the spanker mast), providing space for 18,148 square feet of sails (7 gaff and max. 9 (usually 4) square sails), rigged similar like a topsail schooner with a main gaff sail (fore-and-aft sail) on each mast, one "jib" on the fore mast and three square sails on masts no. 2 and no. 3 (Tuesday & Wednesday); for a time mast no. 4 was also fitted with three yards. In later years, some of the yards were removed. According to some sources (see External links) she would have carried 58,502 sq ft. This amount of canvas is obviously too much for seven fore-and-aft sails and max. 9 square sails. This (larger) figure of sail area lies only a few square meters below that the famous Flying P-Liner Preussen carried (with her five full-rigged masts of 30 square sails and a lot of stay sails). Setting sails turned out to be unusable at the same time as the paddles and screw were under steam, because the hot exhaust from the five (later four) funnels would set them on fire. Her maximum speed was 13 knots.

Two people were killed in the difficult sideways-launch of the Great Eastern, and the ship became known to some as the unlucky ship. She was involved in a series of accidents, including a bizarre incident in which an overheated boiler launched funnel no. 1 like a rocket, killing a crew member and five boiler men in the process[3]

She was at first named the SS Leviathan, but her high building and launching costs ruined the Eastern Steam Navigation Co, so she lay unfinished for a year before being sold to the Great Eastern Ship Co and finally renamed SS Great Eastern. It was decided she would be more profitable on the Southampton–New York run, and outfitted accordingly.

1862 August 27th. The Great Eastern suffered an accident similar to that of the Titanic, but did not sink. She scraped on an uncharted rock off the coast of Long Island, which opened the outer hull over 9 feet wide and 83 feet long. However, the Great Eastern's inner hull was unbroken, and she made her way into New York the next day under her own steam. Nobody was hurt.

The vessel was sold for £25,000 (her build cost has been estimated at £500,000) and converted into a cable-laying ship. Funnel no. 4 and some boilers were removed as well as great parts of the passenger rooms and saloons to give way to open top tanks for taking up the coiled cable. She laid 2,600 statute miles of the 1865 transatlantic telegraph cable.

1867 Steam-steering gear was fitted to the ship; designed by Forrester and Co[6]

Re-fit as a Liner

At the end of her cable-laying career she was refitted once again as a liner but once again efforts to make her a commercial success failed. She was used as a show-boat, a floating palace / concert hall and gymnasium.

View a full copy of the Great Eastern Brochure. The brochure contains 6 pages detailing the inventory at the time in every room. Few copies were made since they were provided on request only to interested parties. This original was owned by the Duke of Norfolk and believed to have been lost in a fire at his home (although unsubstantiated).

In the 1885 sale by auction she was bought by David Lewis of Lewis's Department Store, Liverpool for use as an advertising hoarding—sailing up and down the Mersey. The idea was to attract people to the store by using her as a floating visitor attraction. [7]

1886 Series in The Engineer

In 1886 The Engineer ran a series of detailed articles about the SS Great Eastern.