Grace's Guide is the leading source of historical information on industry and manufacturing in Britain. This web publication contains 140,162 pages of information and 227,382 images on early companies, their products and the people who designed and built them. 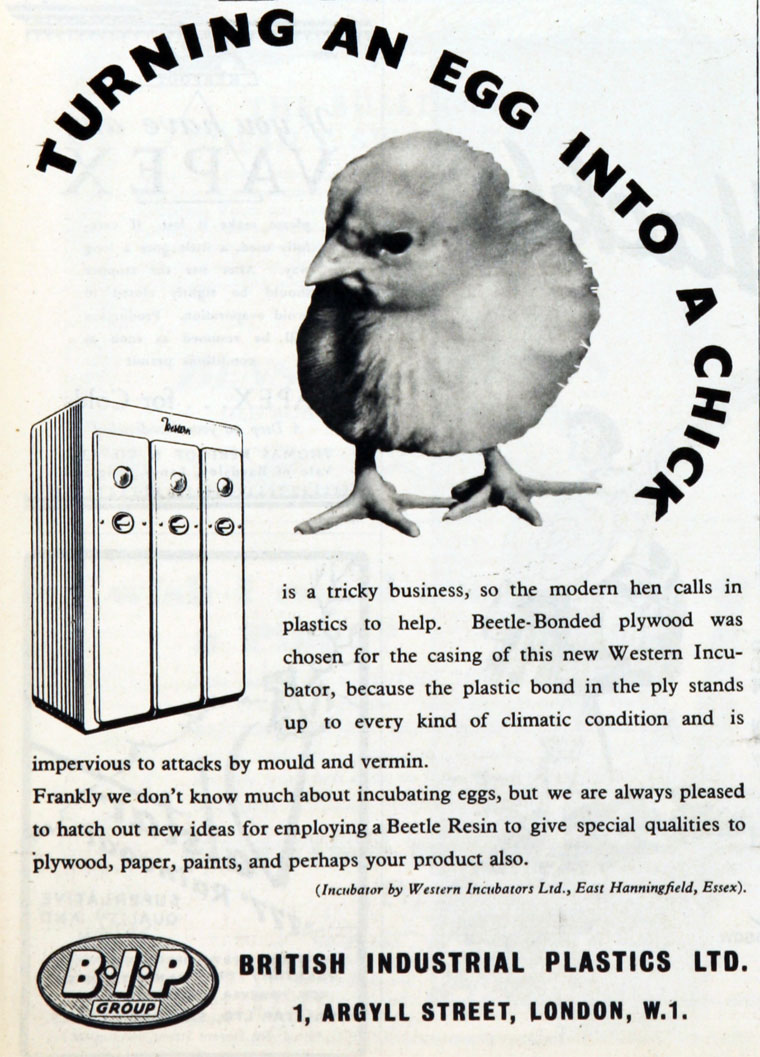 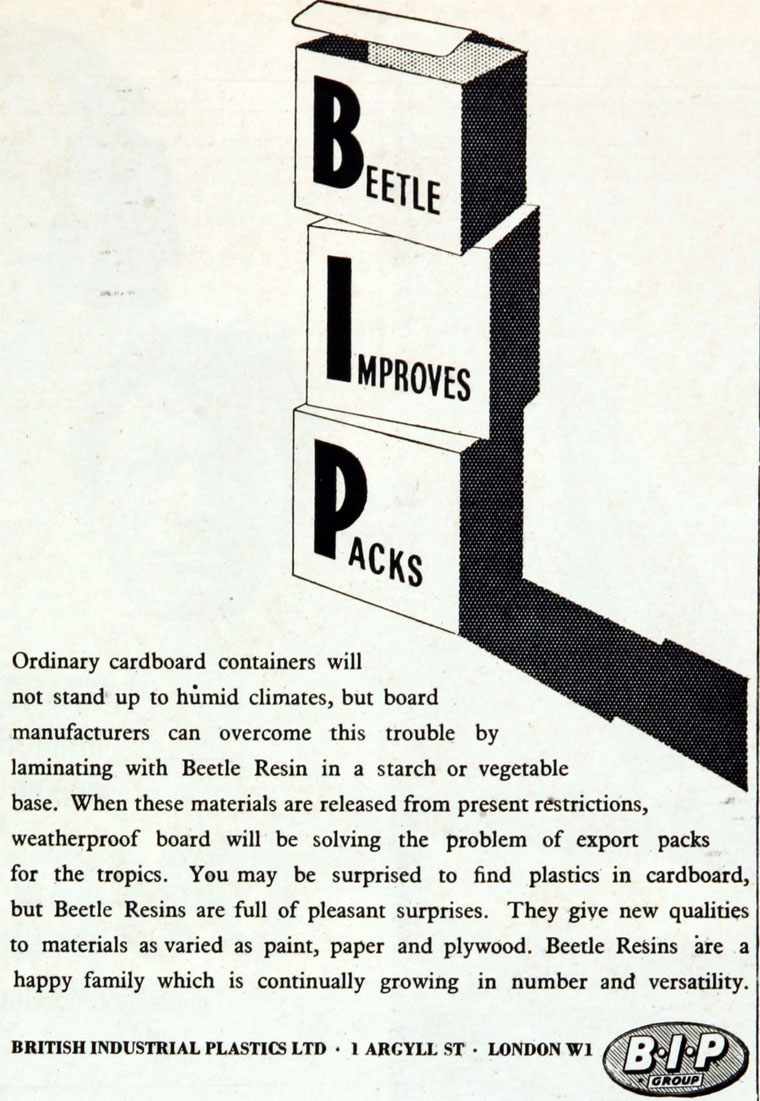 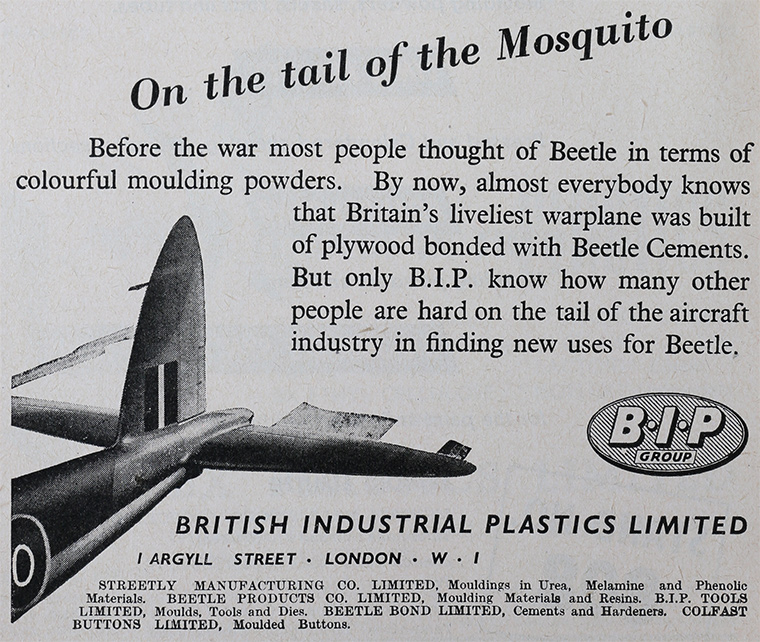 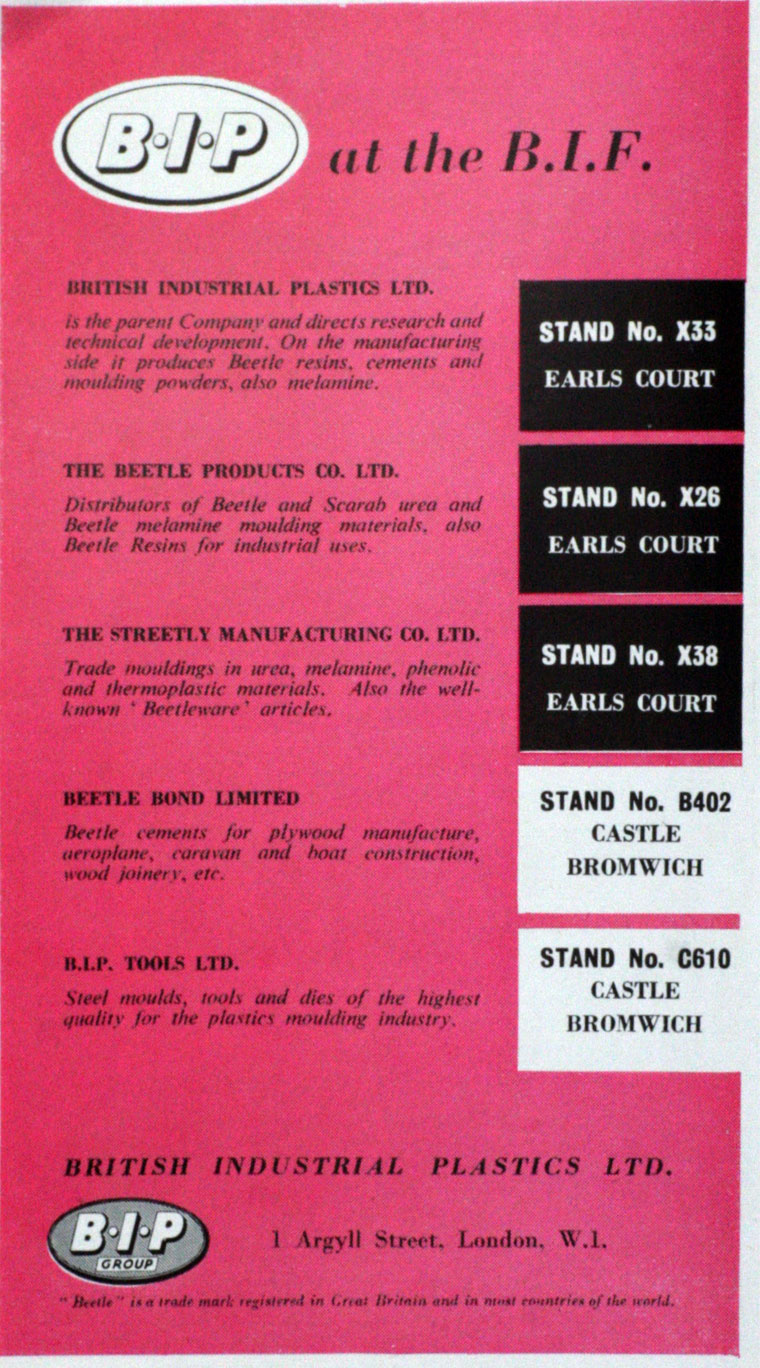 British Industrial Plastics (BIP) is the oldest polymer material manufacturer in the UK, and amongst the oldest in the world. It is a successor to British Cyanides Co which was set up about 1894 to convert sulpho-cyanide directly into cyanide for use in the South African goldfields.

1920s On a visit to the USA, British Cyanides' managing director Kenneth Chance came across the idea of converting sulpho-cyanide into thiourea for use in vulcanizing rubber and weighting silk. As taffeta and weighted-silk went out of fashion and cheaper methods of vulcanizing appeared, Edmund Rossiter conceived the idea of condensing thiourea with formaldehyde to produce water-white resins.

1924 The company's place in the history of plastics was assured when its chemists patented the world’s first ‘water-white’ thermoset resin.

1925 The opportunity to display samples of the new water-white resin at the Wembley Exhibition was too good to miss; it proved popular, with enquiries ranging from the manufacture of wall plugs to french polishing. A quick and profitable return was essential and from this came the decision to concentrate on the production of moulding powders.

1926 The world’s first white commercial moulding powder was produced by British Cyanides Co at Oldbury in the West Midlands. This provided opportunities for designers and new applications, notably for electrical accessories and tableware. Unlike the established thermoset moulding powders, which were based on the straw-coloured phenolic resins, Beetle® urea resins did not affect the taste.

With the moulding properties of the new Beetle® powder improving, an important step towards promoting the material’s potential came with the display of mouldings at London’s Harrods store in 1926.

After 1926, British Cyanides Co put its worst troubles behind it. A reorganisation took place which laid the foundations of what was later to become British Industrial Plastics.

1929 In order to encourage wider use of its revolutionary material, the company purchased the Streetly Manufacturing Co (SMC) to serve as its own moulding plant. Whilst SMC continued to operate as a trade moulder, its facilities and the skills of its staff would be essential to the development of amino-moulding materials and BIP itself.

1936 Unable to recruit the highly skilled toolmakers needed to machine and build precision moulding tools at the Streetly Manufacturing Co in the Staffordshire countryside, the board decided to set up a second manufacturing subsidiary, B.I.P. Tools, as its own tool making company. SMC’s toolroom and its works manager were moved to a purpose-built factory on a green-field site close to Birmingham. Refined mould design techniques produced better mouldings and B.I.P. Tools was created to employ those techniques in designing and producing the moulds. In addition to producing the moulds needed by SMC, B.I.P. Tools also supplied others in the industry.

Also in the 1930s, BIP started to manufacture adhesives, mainly as wood glues for the furniture industry and in for use in the manufacture of plywood.

WWII. The most important use for Beetle® adhesives, and the company’s greatest single contribution to the country during the war, was in aircraft production and boat building; examples include the fuselages of aircraft such as the Mosquito and Horsa glider and the hulls of motor torpedo boats. At one point, demand was doubling every six months.

1943 Beetle Bond set up for the manufacture and sales of adhesives.

1949 The company set up its own moulding press manufacturing company BIP Engineering, created to build the Bipel® press in its own building at Streetly Works.

Parallel with its development of moulding powders, BIP was successfully developing its Beetle® amino resins for the treatment of textiles and paper; these were followed by developing uses in manufacturing paint, as wood glues and for core binding in the foundry industry.

The late 1940s saw the manufacture of melamine formaldehyde resins and moulding powder commence at Oldbury, resulting from the long-standing technical liaison between BIP and its original amino resin licensees in the USA.

By the mid-1950s, the extent and depth of BIP’s involvement in the plastics moulding industry was considerable. Its speciality resins took the company into aircraft manufacture, boat building, construction, iron foundries, the production of furniture and wood laminates, paint manufacture, paper treatment, textile finishing and building insulation.

1957 BIP Reinforced Products was set up with manufacturing at the Streetly Works; this product line provided another outlet for BIP's polyester resins.

As well as increasing the number of overseas agents and distributors, BIP had created sales and manufacturing subsidiaries and associate companies world wide. At one time the list included Beetle-Elliott in Australia, Bipel Maschinen in Germany, Materiales Moldeables in Mexico, British Industrial Plastics (S.A.) (Pty) in South Africa and BIPEL International Inc in the USA.

By 1961 BIP was significant, if not dominant, as a manufacturer in all of its various products, it had a flourishing export market and owned a number of overseas subsidiaries.

1961 BIP was taken over by the building industry giant Turner and Newall. In future years it was discovered that certain resin formulations could be ‘foamed’ and widely used for cavity wall insulation; experiments were also carried out into their use for train and aircraft arrester beds.

1969 A new moulding powder factory was established at Whiston on Merseyside.

1960/70s Turner and Newall bought three factories from BXL, which were transferred to BIP.

By 1995, many of the subsidiaries had been sold or closed. All that remained were the Oldbury factories.

1995 Management buy-out of BIP backed by venture capital, primarily, from Advent, with aim of floating the company within two years but this did not happen because of poor business. Reichold’s coating resins business was acquired, as was Plastex in 1999 and Regent Plastics in 2000.

November 2004 BIP was acquired by Synthite Limited, the UK's leading manufacturer of formaldehyde and a member of the Tennants Consolidated group. Renamed BIP (Oldbury).