Grace's Guide is the leading source of historical information on industry and manufacturing in Britain. This web publication contains 148,355 pages of information and 233,846 images on early companies, their products and the people who designed and built them. 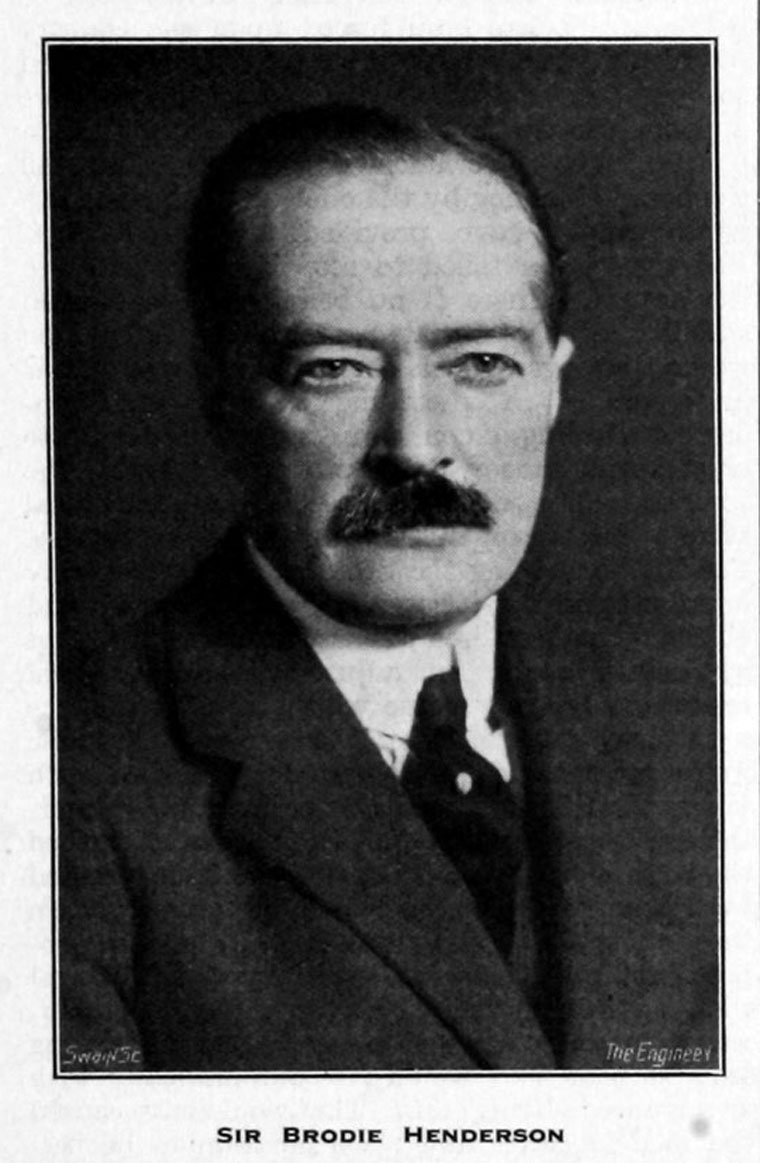 Sir Brodie Haldane Henderson (1869-1936), Senior partner of Livesey and Henderson, (consulting civil engineers), and a past president of the Institution of Civil Engineers.

Following his scientific training he spent some time in an office in Westminster and then worked for Beyer, Peacock and Co.

1928 Became President of the Institution of Civil Engineers

SIR BRODIE HALDANE HENDERSON, K.C.M.G., C.B., was born on the 6th March, 1869, and died at Upp Hall, Braughing, Herts, on the 28th September, 1936. He was educated in Germany, at Owen’s College, Manchester, and at King’s College, London. When 16 years old he became a pupil of Messrs. Beyer, Peacock and Company, and later continued his pupilage under Mr. James Livesey, M. Inst. C.E., during part of which time he acted as assistant engineer on the construction through mountainous country of the Bobadilla- Algerciras (Gibraltar) Railway. He was subsequent+ employed in the Civil Engineer’s Department of the Lancashire and Yorkshire Railway.

On the 6th October, 1891, he entered into partnership with Mr. James Livesey and Sir (then Mr.) H. Livesey, M. Inst. C.E., under the style of Livesey, Son and Henderson, and at the time of his death was senior partner of this firm, which is now known as Livesey and Henderson. Sir Brodie, through his firm, was connected for many years with railway, dock, and harbour developments throughout Latin America as well as in Spain, China and Africa, and more recently his firm were Consulting Engineers with Messrs. Rendel, Palmer, and Tritton for the construction of the Lower Zambesi bridge, the longest bridge in the world at the time of opening and now the second longest bridge. His firm were the engineers for the construction of the Transandine tunnel driven through the Andes Mountains, and for the new docks at Buenos Aires, the construction of which was commenced in 1911 and completed in 1925.

Sir Brodie served on the Commission of the Peace, was High Sheriff of Hertfordshire in 1925, and was also a Deputy Lieutenant of that county.

Sir Brodie was elected an Associate Member of The Institution in 1894 and was transferred to full membership in 1899. He was elected as Member of Council in 1916 and as Vice-President in 1925, and held the office of President in 1928-29. Sir Brodie was for many years one of the Governors of the Imperial College of Science and Technology, a member of the Delegacy of the City and Guilds College, and Hon. Consulting Engineer to the Imperial War Graves Commission.

He married in 1901 Ella, daughter of James Jones of Lechlade, who survives him and by whom he had three sons and one daughter ; one of his sons, Mr. Neil B. Henderson, is a partner in the firm of Livesey and Henderson.