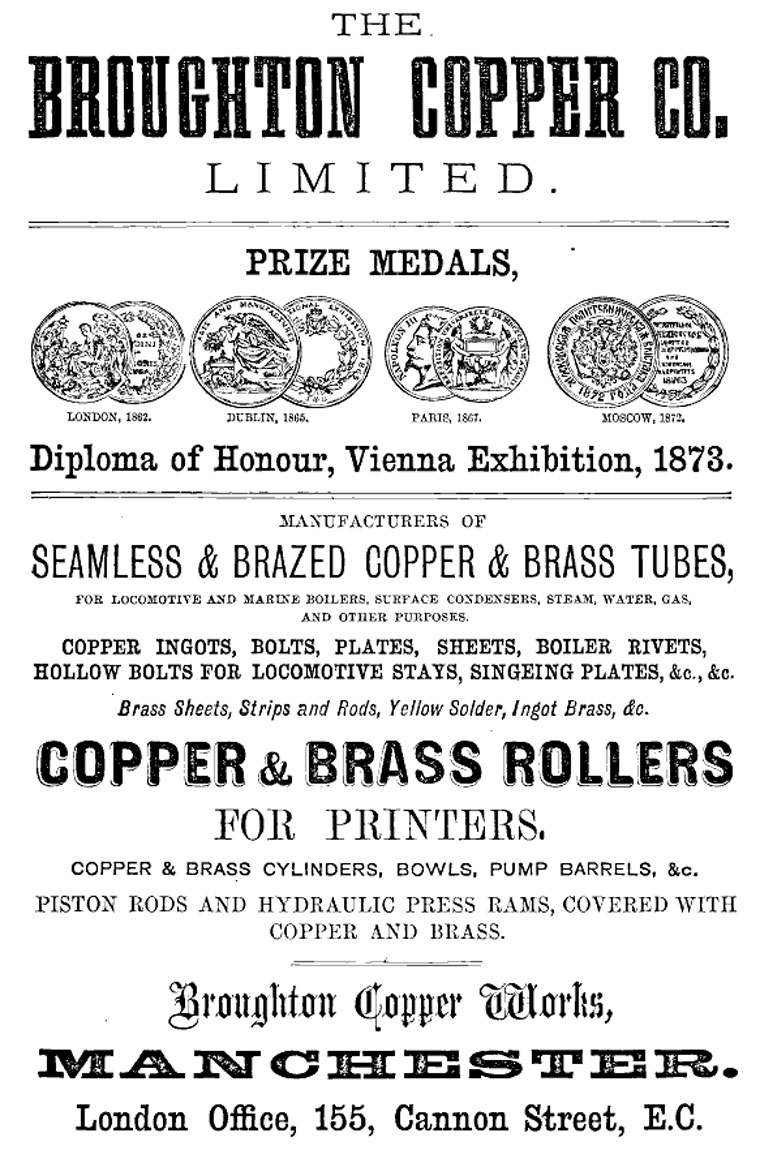 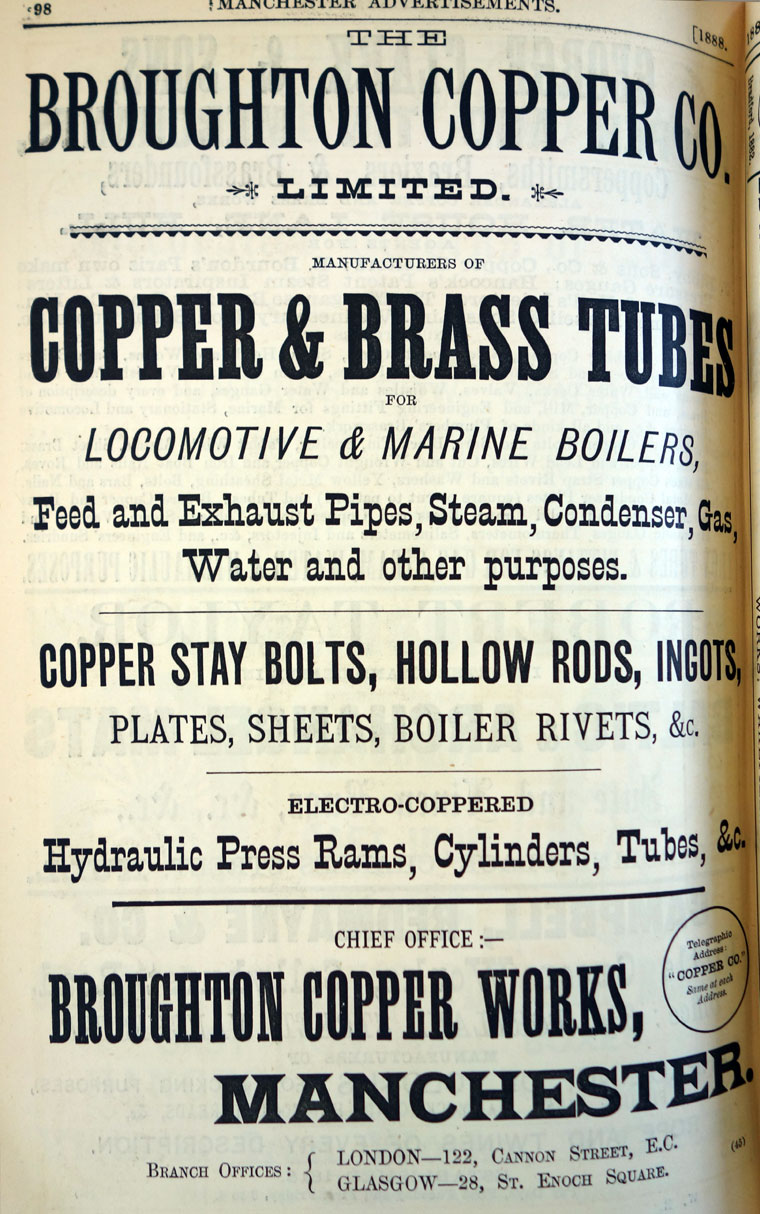 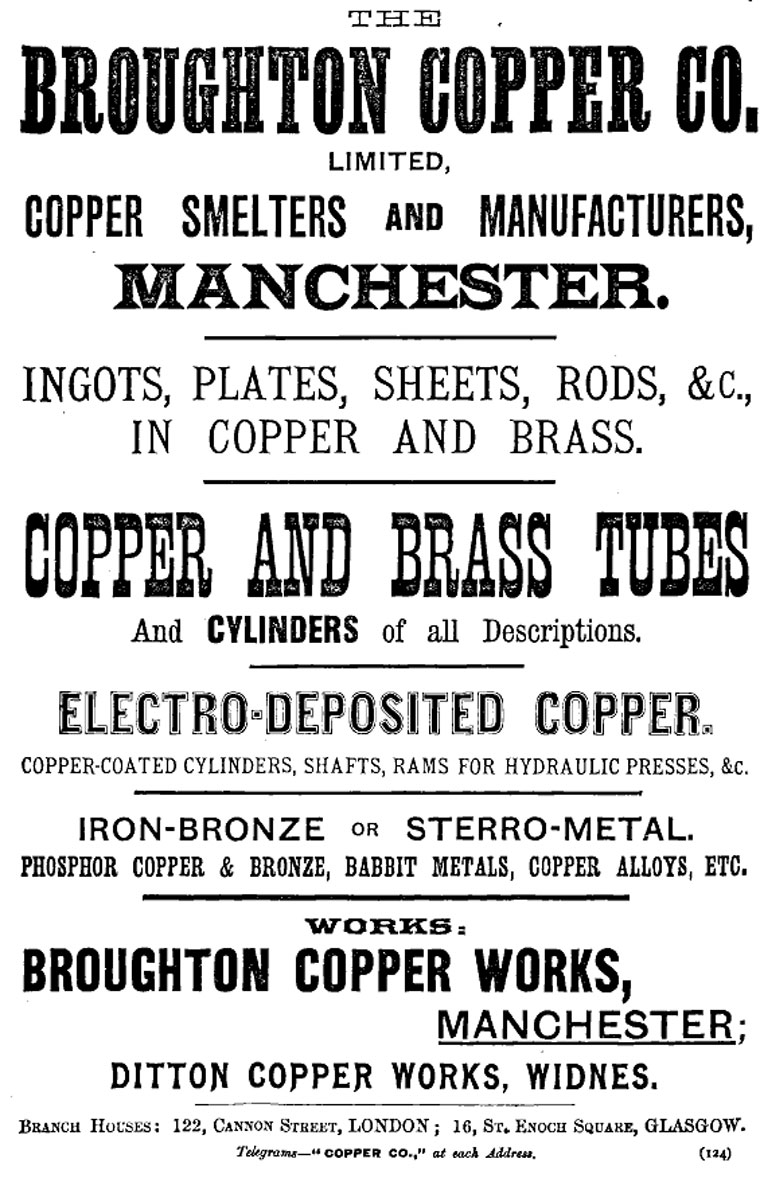 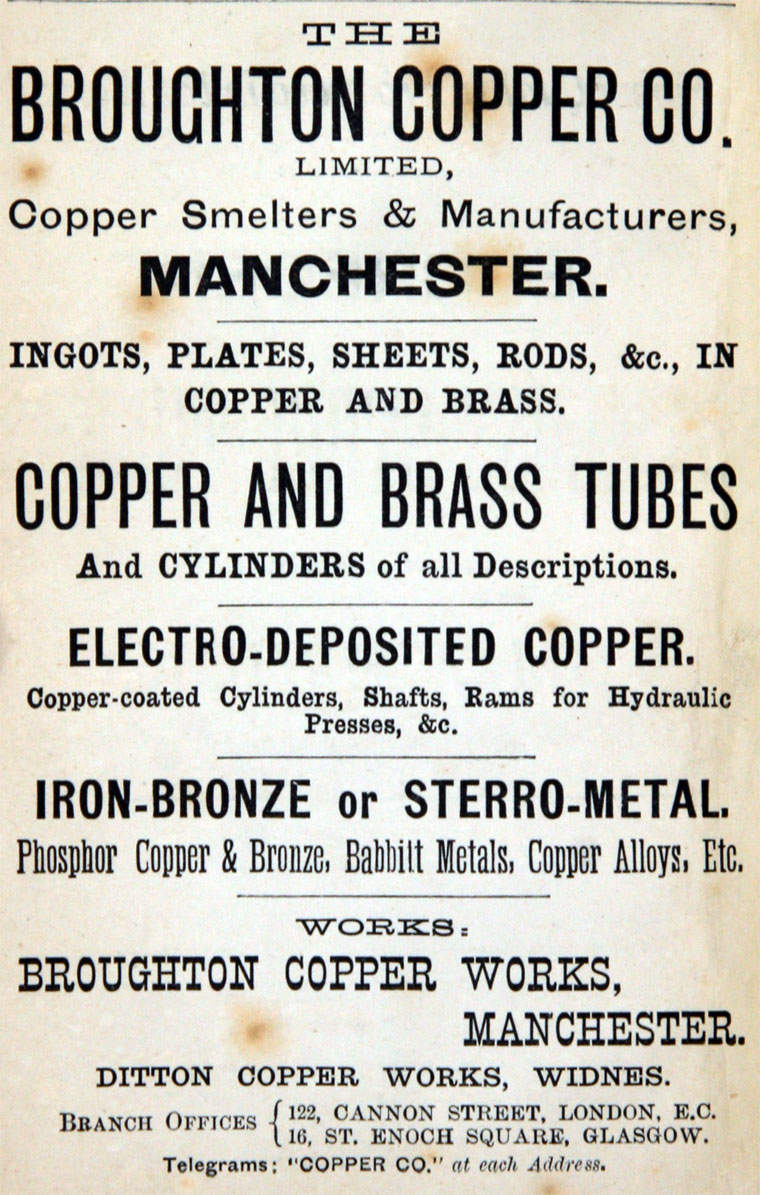 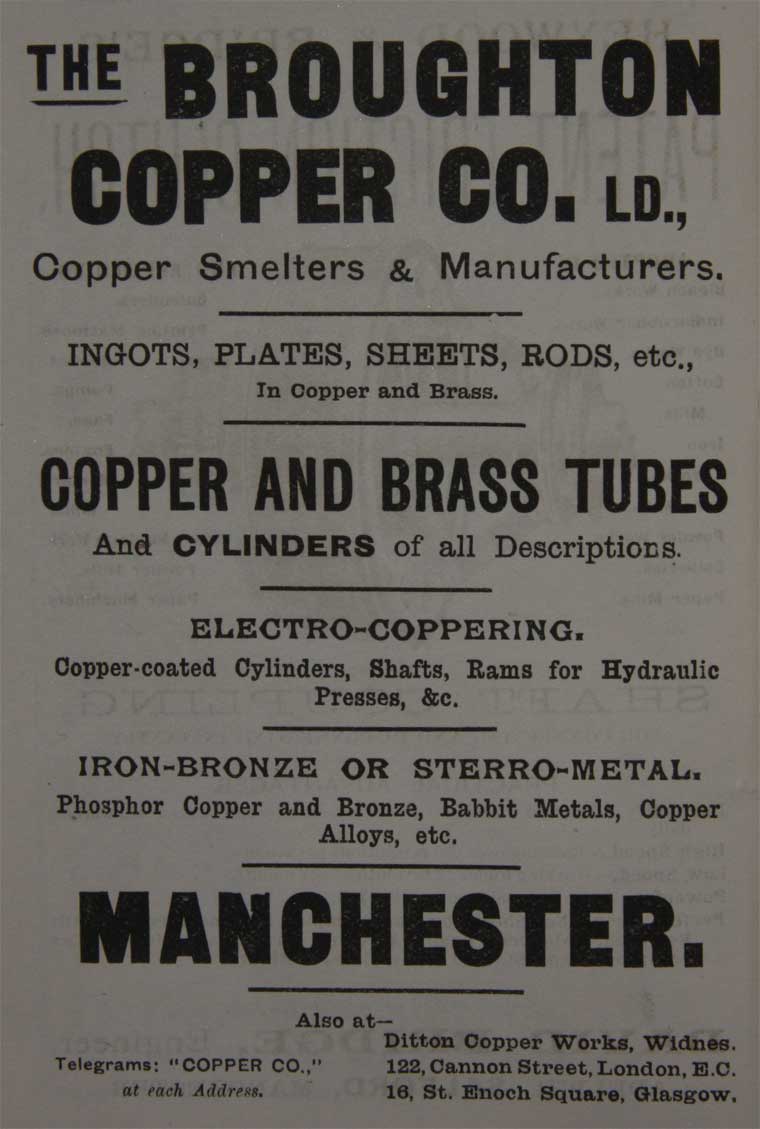 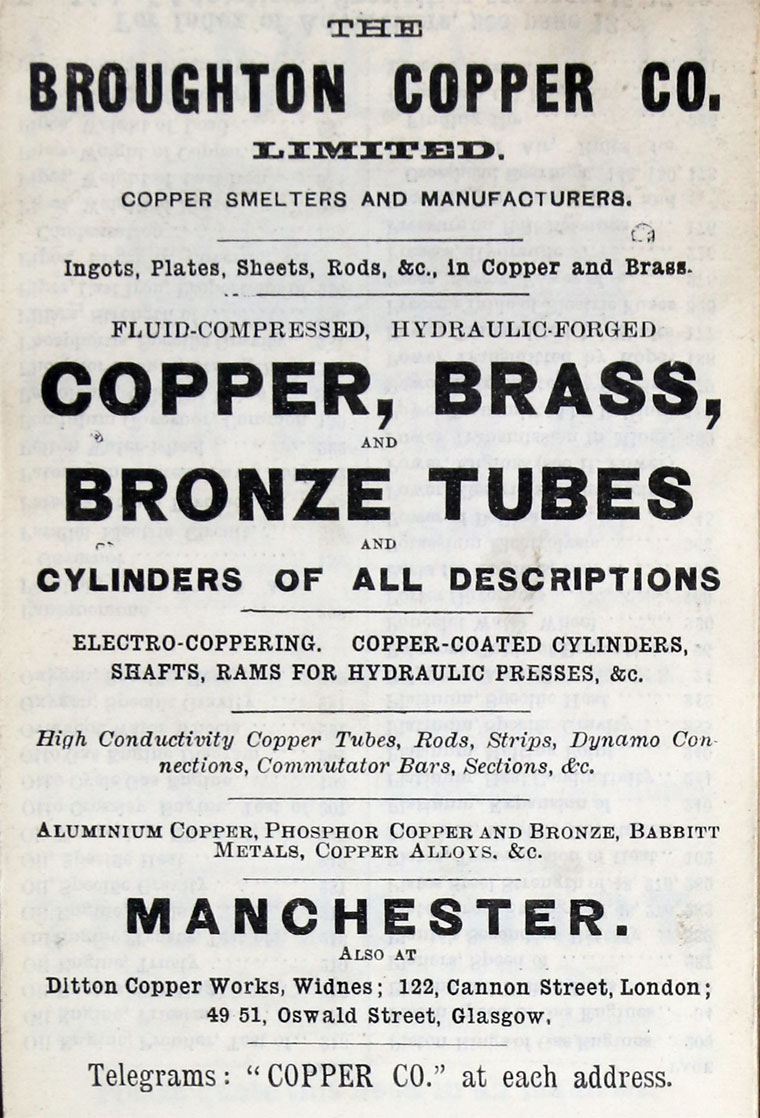 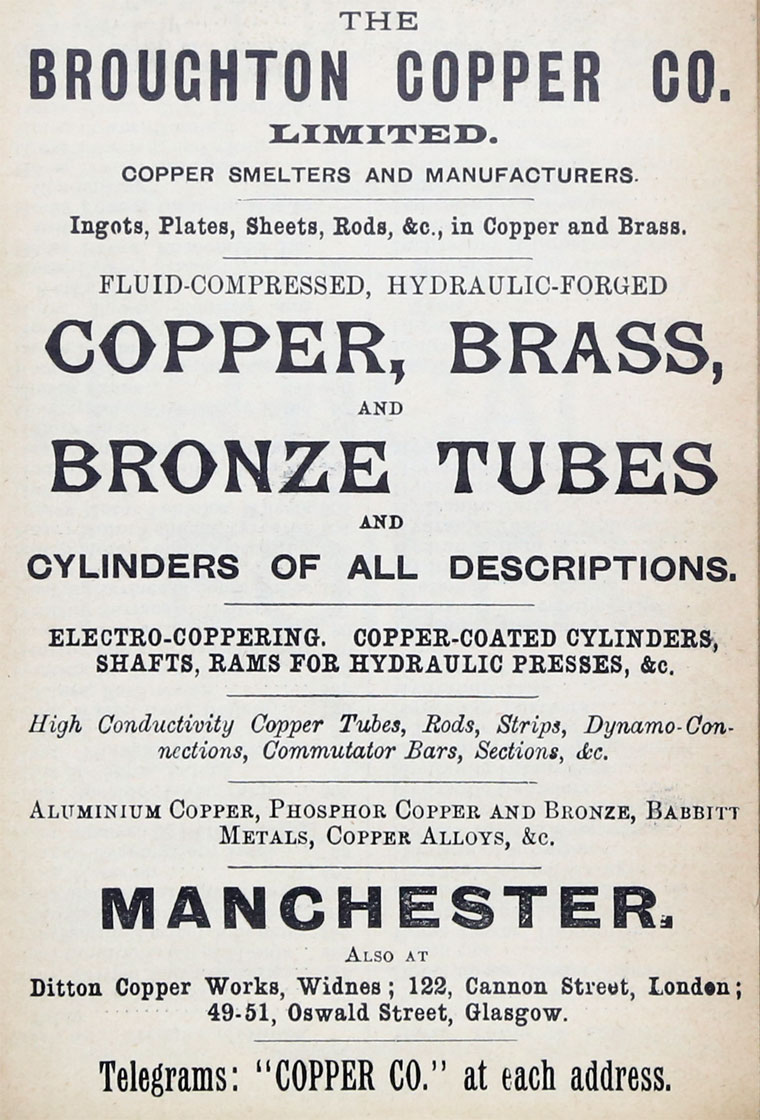 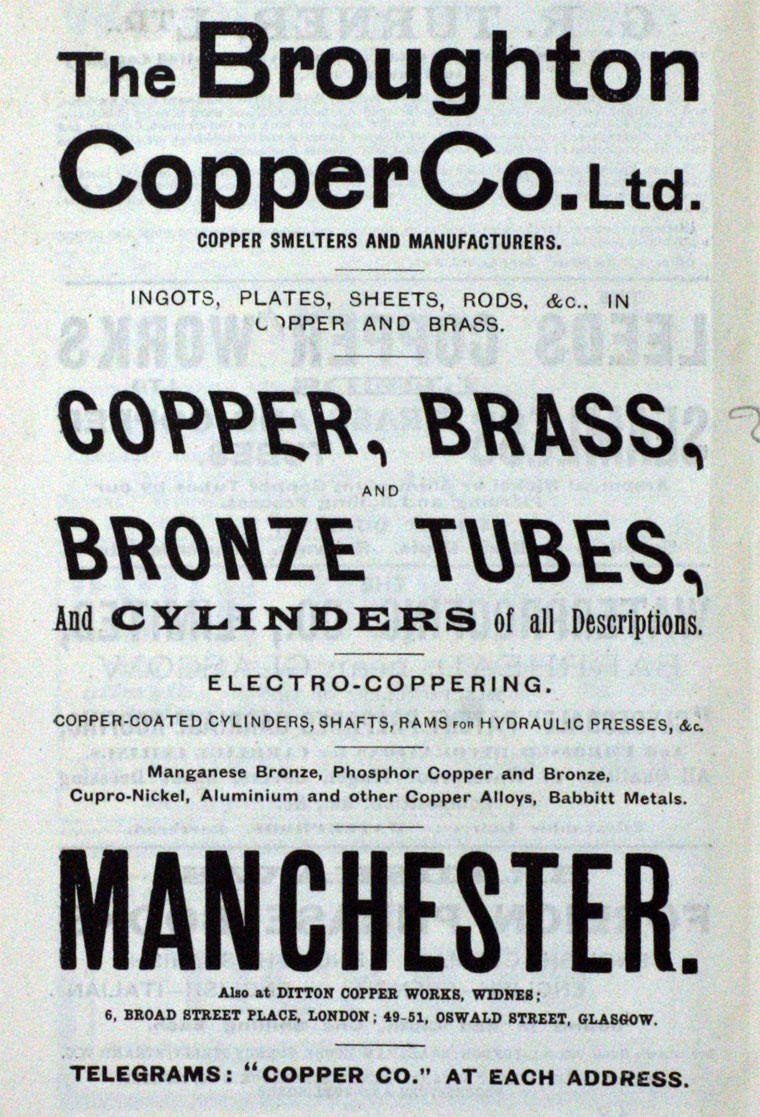 of Manchester and also at Ditton Copper Works, Widnes

1858 Patent sealed during the week ending 13, 1858:- 'William M'Naught, Manchester, engineer, and Walter Richard Critchley, of the Broughton Copper Company, Salford, copper roller manufacturer, for improvements in the manufacture of copper or other metallic rollers or cylinders for printing fabrics, and in apparatus connected therewith.'[2]

1882 'THE CRYSTAL PALACE ELECTRICAL EXHIBITION. Amongst provincial towns Manchester is very well represented in several departments, more particularly in the heavier and perhaps less popular applications of electricity. Not the least important exhibit is that of the Broughton Copper Company, who display a number of specimens of electro-coppering. They have a patent process (Wilde's) of depositing copper on cast-iron press rams, starch rollers, and boiler tubes. The deposition is very regular and compact, possesses great tenacity and toughness, and is quite free from blotches or blisters, accordingly it permits of the copper being well worn through, without any risk of separating from the iron. The result is that considerable economy is effected the amount of copper used, re-coppering being an inexpensive process. As regards the rams, the perfection of the copper surface and its freedom from corrosion ensures to the press loathers much greater durability, there being very little friction. In the case of boiler tubes the copper is deposited so firmly that, it is said, a tube may be raised to a red heat and plunged in water without showing any blisters.'[4]

1884 'Copper-covering of Hydraulic Rams.— The Broughton Copper Company, whose works are situate near Broughton Bridge, in the adjacent borough of Salford, have just completed an important piece of engineering which has until now been considered practically impossible. This consists in the covering of large hydraulic ram with a continuous copper coating. The difficulties and the expense incurred by the wear of cast-iron rams for hydraulic lifts and presses have caused many attempts to be made to introduce material for covering rams which should not be liable to corrosion and grooving. In small rams these attempts have met with considerable success; but for long rams there has not until now been found any really practicable method of avoiding the evils inseparable from cast-iron. This difficulty has been experienced in an especial degree by the Victoria Graving Dock Company, of London, who employ 32 rams, each 27ft. long by 10in. diameter. The action of the salt water on the rams speedily corroded them, and, with view to obviate this, the Graving Dock Company instructed the Broughton Copper Company to cover a ram with copper. The ram on which the experiment was made is in length 27 feet, and this has been covered with copper coating, one-eighth of an inch in thickness, in one continuous sheet. The outside diameter is 10in., and the tube with which the ram is encased is the largest single tube of copper which has as yet been produced in any part of the world. The action of salt water upon copper is stated to be almost inappreciable, and the successful attempt which has now been made to cover hydraulic rams for graving dock purposes will undoubtedly result in a considerable saving. The total weight of the ram as covered is 2 tons 10cwt., and the quantity of copper used 400lbs. The surface of the copper covering has been polished, and is without fault in the whole length.'[5]

1897 The company was registered on 17 June, to take over the business of a company of copper smelters and manufacturers of the same name. [7]

1905 Advert. Manufactures of copper, brass and bronze tubes for locomotive and marine boilers. [8]