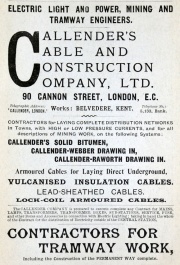 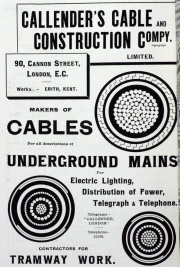 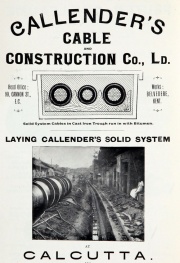 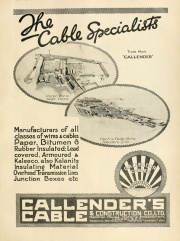 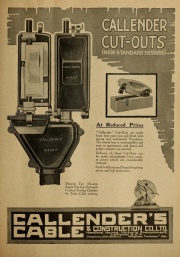 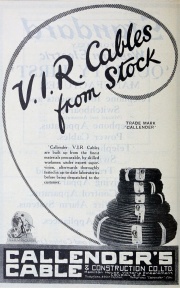 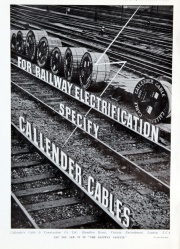 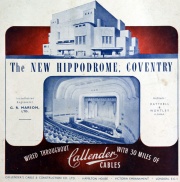 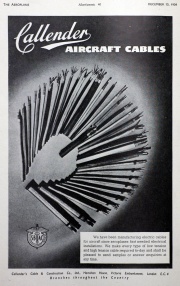 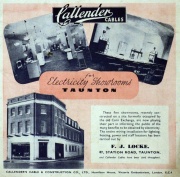 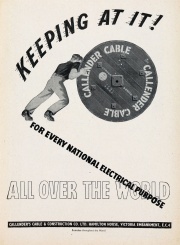 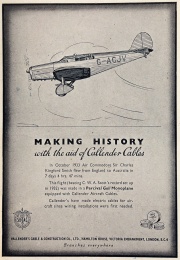 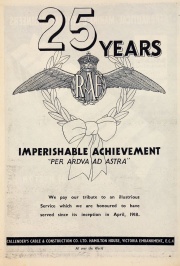 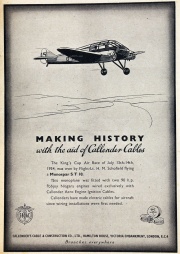 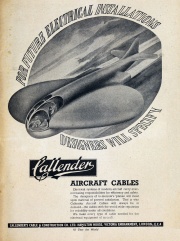 Callenders Cable and Construction Co of Erith; of Falkirk, Scotland

Callenders, originally an importer and refiner of bitumen for road construction, began manufacturing insulated cables in the 1880s at their Erith site on the Thames.

1870 William Ormiston Callender‎ visited the asphalt deposits at Val de Travers, Switzerland; on his return, he set up Callender and Amos with Thomas A. Amos to act as agents for the Val de Travers Company of Neuchâtel to import asphalt for the many road-making schemes that were taking place in the City of London.

1877 William Callender obtained an interest in the import of bitumen from Trinidad for road-making and other waterproofing purposes. Took his two eldest sons, Thomas and William, into business as Callender and Sons, refiners of bitumen and for asphalt paving. Offices at 150 Leadenhall Street, London, with a small refinery at Millwall, where the bitumen was landed.

Thomas then arranged that all impurities be eliminated at source, which reduced costs.

1880 On a visit to Russia, Thomas saw the opera house in St Petersburg was lit by Jablochoff candles. To exploit the developing market for electric lighting, he decided to turn the business towards the production of large-capacity insulated cables.

Tests on the production of insulated wire began at their new factory at Erith, Kent. The management of the Erith works became Thomas's responsibility.

1882 Callender's Bitumen Telegraph and Waterproof Company was formed to finance the development of vulcanized bitumen.

Sir Samuel Canning of the Telegraph Construction and Maintenance Co joined the company.

Early 1880s Thomas invented the "Callender solid system" in which cables were laid in wooden troughs and embedded in bitumen.

1883 Cables were supplied for the electric lighting of the new law courts in the Strand and for the Covent Garden Opera House in 1883, as well as mains cables for the growing number of electricity supply companies.

1891 the firm introduced an underground electric haulage system at the Abercannaid colliery, Merthyr, and in the same year received its first tramways order, which was soon followed by the first electrified underground railway.

1896 Callender's Bitumen Telegraph and Waterproof Company was reconstructed as Callender's Cable and Construction Company and was incorporated as a limited company. The company was registered on July 24th, to take over the business of Callenders Bitumen Telegraph and Waterproof Co. [2]. With Thomas Octavius Callender as managing director (a position he held until his death), the company was well placed to profit from the huge expansion in the uses of electricity.

1903 took over the Anchor Cable Co Ltd of Leigh, Lancashire. Mr. James Callender, in addition to his other duties, took over the Technical Management of Anchor Works, converting the factory from paper-insulated- to rubber-insulated-cables[3]

1914 Manufacturers of cables of every description. Speciality: the "Solid System of Mains" and the insulation of cables by vulcanised bitumen. Employees 5,000. [4]

1916 Patent - Improvements in and/or connected with the Protection of Electric Supply or Distribution Systems in which Split or Parallel Conductors are Employed. [5]

1929 Was "closely in touch" with Balfour, Beatty and Co who carried out a contract for them in Jerusalem[7]

WWII: Developed method of dealing with magnetic mines using buoyant cable towed by 2 ships[12]. Callenders (together with Glovers of Trafford Park, Manchester) manufactured the Pluto system (Pipelines under the Ocean) which was vital to supplying fuel to the Allied invasion force in 1944.