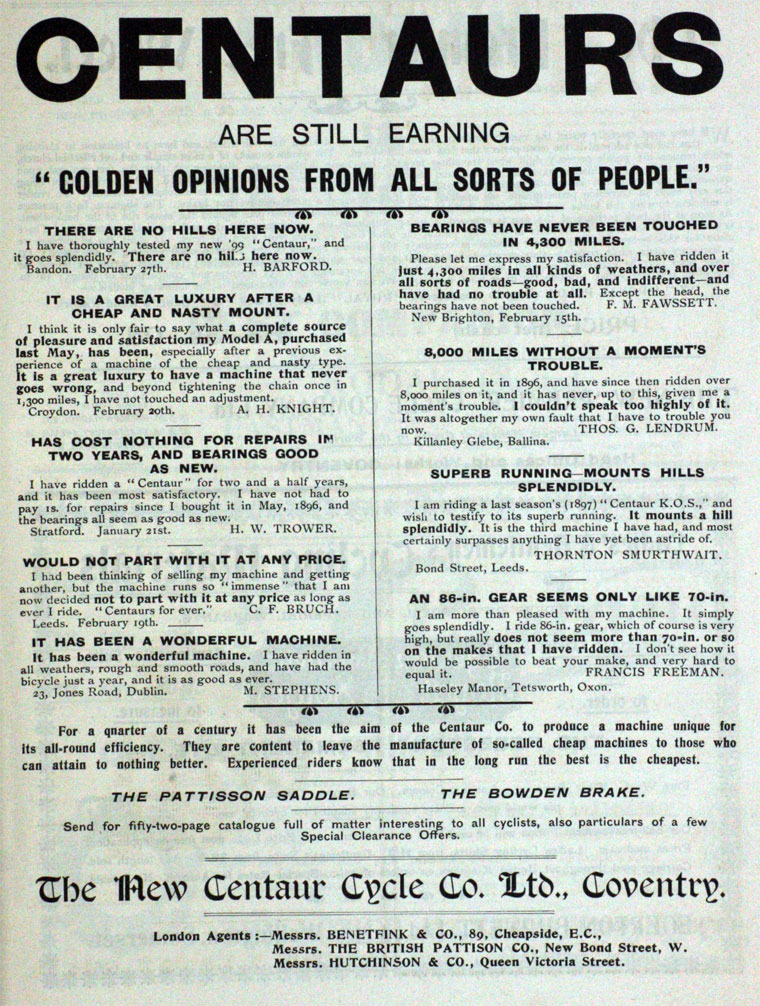 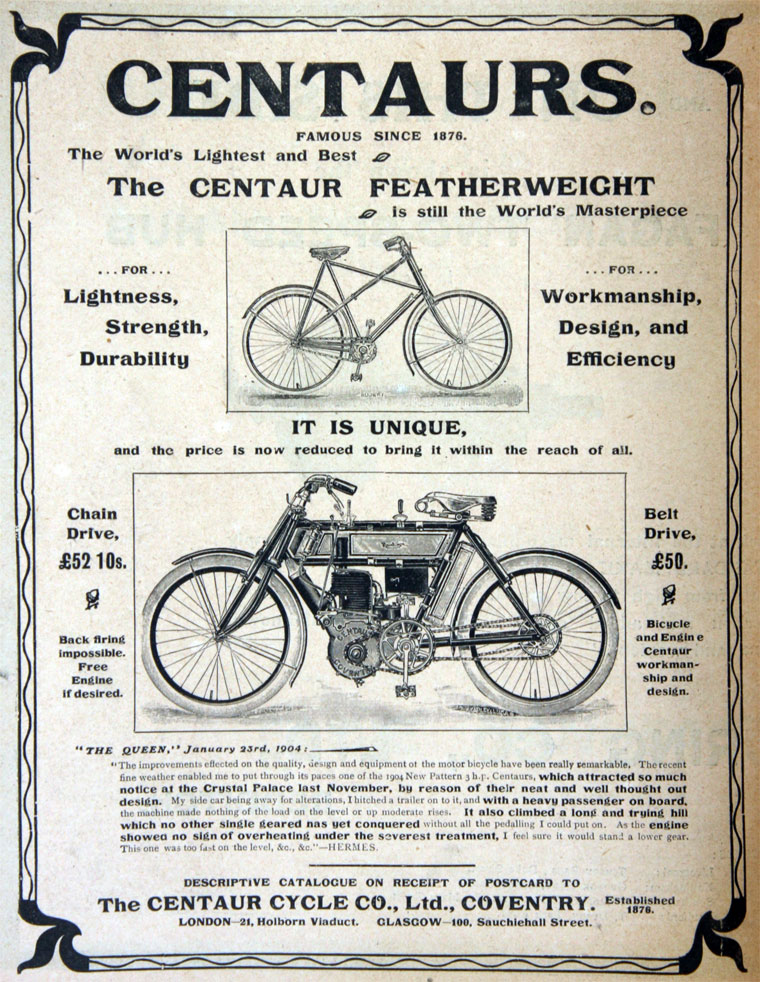 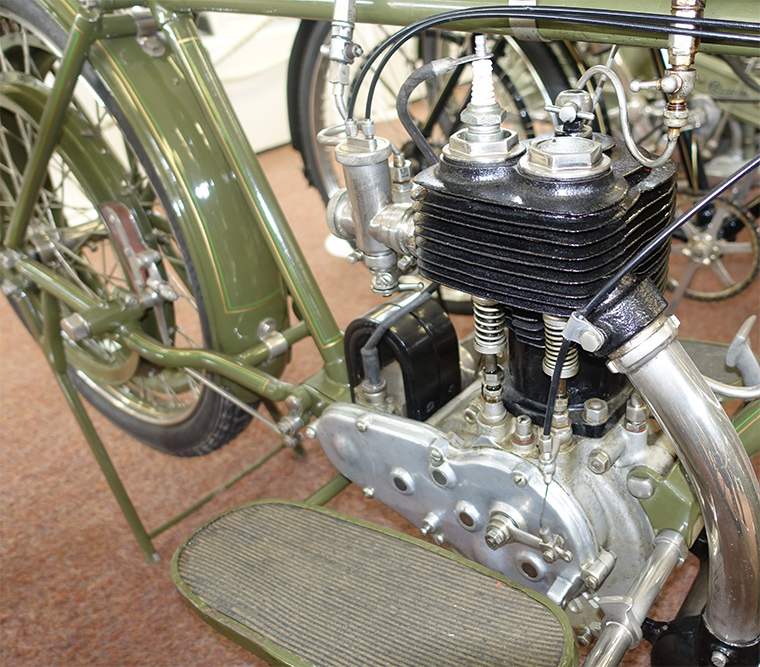 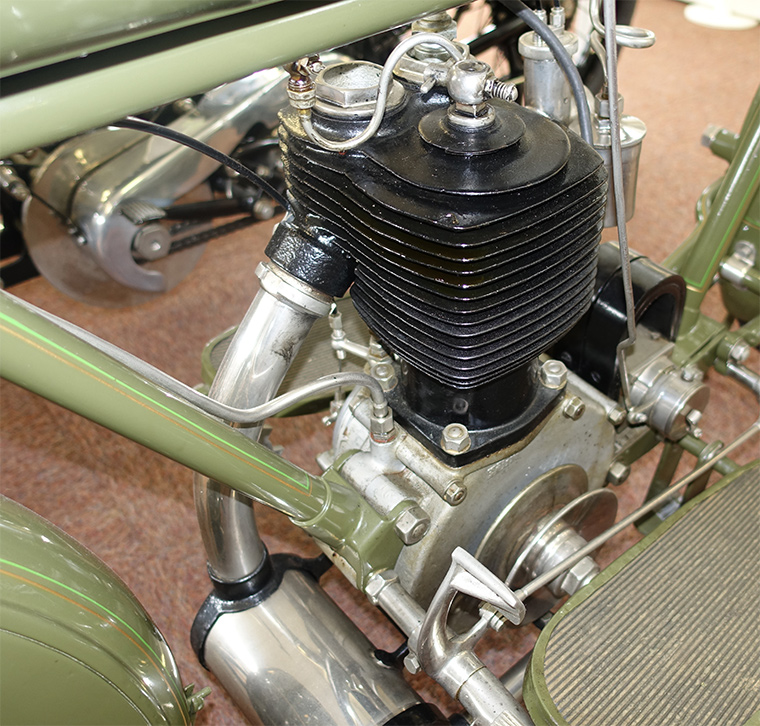 1890 Particularly successful in introducing a lightweight bicycle. The King of Scorchers weighed only 26 lbs.

1890 Case brought by Bown against the company claiming infringement of patent; evidence concerned the earlier case against Humber, Marriott and Cooper which had been concerned with an "ordinary" cycle supplied to Thomas Lambert [1]. Decision in favour of the defendants, namely that Lambert's cycle had predated the patent [2].

1901 Produced chain-driven motorcycles powered by 3 hp Humber engine. These were shown at the 1902 National show

1904 Using their own engines

1906 In January, reverted to the original name of Centaur Cycle Co [5]

1912 Listed in Spennell's directory of Coventry as Cycle Manufacturers. [6]

1901 The machines first appeared as primitive but well built.

1904 The silencer was used as the frame downtube between headstock and crankcase. It had a 348 cc 3hp engine with valves at the front of the cylinder and braced forks incorporated a rubber buffer to take some of the road shocks. It also had belt or a two-stage chain-drive. Another model had an inclined engine, which replaced the downtube as in the Humber and P and M design. A forecar was also offered.

1905 The silencer reverted to being a separate item and was no longer part of the frame.

1906 The 3hp model continued for that year. Manufacture then stopped for a few years.

1910 The company returned with standard and TT models, both fitted with a 3.5hp engine, with valves at the front of the cylinder. The standard model had a Bosch magneto ahead of the crankcase and sprung forks, the TT version was rigid with a rear-mounted magneto. Two ran in the TT, but neither was successful.

1911 That year saw the arrival of a free-engine clutch and a 3.5hp vertical twin with overhead inlet-valves.

1912 Various models were available from 2hp to 3.5hp and there was also a ladies' version. Four models continued for the next two years.