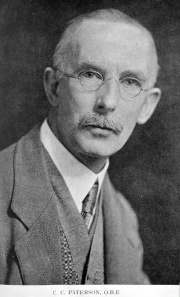 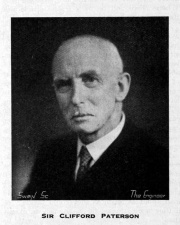 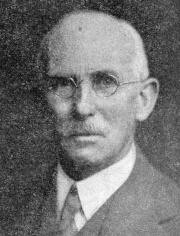 1879 born in Stoke Newington, London, the son of Frederick Paterson, a tanner and leather merchant, and his wife, Janette, née May.

1896 Moved to the Finsbury Technical College

1897 Apprenticed to George Wailes and Co in London and Mirrlees, Watson and Co in Glasgow.

1901 Moved to Faraday House as a special student assistant in the testing department under Alexander Russell.

1902 sent to Switzerland to the Maschinenfabrik Oerlikon, where he worked on the Jungfrau railway installation.

1903 Appointed assistant (later principal assistant) of the electrotechnical and photometric divisions of the National Physical Laboratory. This also provided him with an early opportunity to try out his ideas on laboratory design.

During the next 15 years he built up the photometric section, doing a great deal of pioneering work on photometric standards and on various problems of light measurement.

1905 Married at Stamford Hill Congregational Church, Eleanor Daisy Ogden (1875–1962). They had two sons and one daughter.

He was deeply involved in creating a national framework for science and engineering.

1913 he was elected the first secretary of the international commission on illumination.

1915 Joint secretary of the Home Office committee on the lighting of factories and workshops, which published its report in 1915.

WWI Served as a member (later chairman) of the Board of Trade committee on ships' navigation lights and chairman of the British Engineering Standards Association committee dealing with the lamps used by the Royal Flying Corps.

1916 Paterson was approached by Christopher Wilson and Frederick Percy Driver of the Osram Lamps works to set up a research laboratory; eventually he agreed to do so when the war ended, by which time the Osram works had been amalgamated with GEC. The laboratories would now cover all of GEC.

1918 Joined the council of the Institution of Electrical Engineers. Continued to perform research himself.

1919 He left the N.P.L., joining GEC, where he began to build up a vast industrial research laboratory. The first laboratory was set up at the valve works at Hammersmith based on Paterson's design

1922 The laboratories moved to new premises at Wembley. The laboratories would be involved in solving problems raised by the factories and improving technical aspects of production and operation. They would also undertake long-term investigations that would be of commercial application in the future, as well as research into fundamental physics. He felt that a balance between enabling individual research to flourish and promoting a community spirit was central to the organization of a research institution.

1928 President of the Illuminating Engineering Society

1930 President of the Institution of Electrical Engineers

1938 President of the Electrical Research Association

WWII The Wembley laboratories were given the task of improving the cavity magnetron design and producing sets for practical use.

He was a director of GEC, as well as founder and director of their Wembley Research Laboratories. He was also a member of the Executive Committee of the National Physical Laboratory.

Paterson was the recipient of several honours, including an Honorary Doctorate in Science from the University of Birmingham in 1937, the Faraday Medal in 1945, the James Alfred Ewing Medal in 1946 and the Gold Medal of the Illuminating Engineering Society of North America in 1948;

1948 He died on returning from a trip to Australia and New Zealand. The Clifford Paterson Lecture is named in his honour.

Clifford Copland Paterson was born on 17 October 1879 at Stamford Hill, and was educated at Mill Hill School. After serving a four years' engineering-shop apprenticeship, he passed through the Finsbury Technical College and Faraday House.

The first part of his career from 1901 to 1918, was at the National Physical Laboratory as principal assistant under Sir Richard Glazebrook, responsible for the electro-technical and photometric departments.

He joined The General Electric Co. Ltd. in 1919 to establish and direct the G.E.C. research laboratories, under his guidance, these laboratories, which began with a staff of 29, developed to their present size, with a staff of 1,250. He was appointed to the board of the G.E.C. in 1941 and received his knighthood in the Birthday Honours List of 1946.

He was a Past-President of the Institution of Electrical Engineers, of the Institute of Physics, of the Illuminating Engineering Society, and of other scientific bodies. He was Chairman of the Council of the British Standards Institution and a member of the Advisory Committee of the Department of Scientific and Industrial Research. He served as a member of the Executive Committee of the National Physical laboratory, and as Vice-President of the Royal Institution and of the Royal Society of Arts. He received the honorary degree of D.Sc. from Birmingham University in 1937, and he was for two years Master of the Worshipful Company of Tallow Chandlers. The last of many honours which he received during his life was the award of the Gold Medal of the Illuminating Engineering Society (America), which was presented to Lady Paterson on Thursday 22 July 1948, by Preston Millar, Past-President of the Society. Sir Clifford had just returned from Australia, where he had been to establish liaison between scientific bodies of Great Britain and Australia.

He was elected a member of the Institute of Metals in 1919.

"Clifford Copland Paterson was born at Stamford Hill on October 17, 1879, and received his early education at Mill Hill School. After serving a four years' engineering apprenticeship, part of which was spent with the Maschinenfabrik Oerlikon, Zurich, he continued his studies at Finsbury Technical College and Faraday House. He began his long and uninterrupted association with research in 1901, when he joined the National Physical Laboratory, where he worked for seventeen years. As principal assistant under Sir Richard Glazebrook he was responsible for the electrotechnical and photometric departments. There he soon established his reputation as an authority on illumination and its measurement.

It was in 1916 that Hugo Hirst, who later became Lord Hirst of Witton, first discussed with Clifford Paterson the project he visualised for establishing research laboratories to serve the rapidly growing manufacturing ramifications of the General Electric Company, Ltd. For various reasons, however, the project had to remain dormant until after the end of the First World War.

Then, in 1919, Clifford Paterson joined the General Electric Company, Ltd., to found, organise and, for nearly thirty years, direct the company's research laboratories. From small beginnings, with a staff of twentynine, these laboratories grew rapidly, under his tutelage, into the largest of their kind in this country, employing a staff of 1750, including several hundred fully qualified research workers. In 1941 Clifford Paterson was made a director of the G.E.C. and five years later he received his knighthood.

Although Sir Clifford's name is, naturally, associated with developments in illumination, his achievements ext end well beyond this particular field. Already, during the First World War, he had shared responsibility for the development of the Paterson-Walsh electrical height-finder, which recorded automatically the heights of aircraft. It is likely, however, that Sir Clifford will be better remembered, not for his individual contributions to science but for the still greater contribution he made to the electrical industry by creating a centralised research establishment that may fairly be regarded as a model of its kind.

This alone was no small achievement, for in the early days of t he laboratories at Wembley the idea of centralised research for a number of diverse and widely separated factories was by no means universally acceptable. It required all Sir Clifford's clearness of vision and tenacity of purpose, tempered by tact, to win the confidence of all those whose co-operation was essential to the success of the venture. Always a staunch individualist, with a natural distrust of the conventional, Sir Clifford contrived to build up a staff, blending originality of outlook with team spirit in the right proportions to allow him to direct the whole organisation without undue regimentation of its parts.

If Sir Clifford devoted most of his life's work to the laboratories at Wembley he did not allow his services to science and industry to be bounded by any narrow horizon. In 1930-31 he was President of the Institution of Electrical Engineers. He was, in turn, Past-President of the Institute of Physics, the Illuminating Engineering Society, and of other scientific bodies. Up to the time of his death he was Chairman of the Council of the British Standards Institution and a member of the advisory committee of the Department of Scientific and Lndustrial Research. He served also as a member of the Executive Committee of the National Physical Laboratory and as Vice President of the Royal Institution and of the Society of Arts.

In 1937 he received the degree of D.Sc. (Honoris Causa) from Birmingham University. As a recognition of his services to science and industry he was a warded the Faraday medal of the Institution of Electrical Engineers in 1945. A year later, for his work in engineering research, he received the James Alfred Ewing medal from the council of the Institution of Civil Engineers.