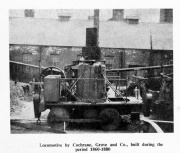 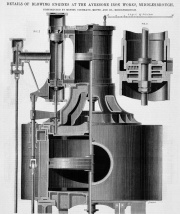 1872. Blowing engines at the Ayresome Ironworks of Gjers, Mills and Co.

Iron Founders and Engineers, of Ormesby

c.1858 Mr Cochrane and Edmund Grove founded the firm of ironfounders and engineers.

1864 'DUDLEY. Flattering Testimonial —On Monday evening, a testimonial was presented to Mr. John Riley, who for thirteen years has been foreman of the boiler and bridge department of the Woodside Iron Works (Messrs. Cochrane, Grove, and Co.'s). The testimonial consisted of a handsome gold chronometer and a gold chain and appendages. The presentation took place at a dinner, of which upwards of sixty of the subscribers partook.'[2]

1879 Henry Cochrane left the Partnership with Charles Cochrane, William Cochrane, Joseph Bramah Cochrane, Brodie Cochrane, George Cochrane, Alexander Dundonald Cochrane, Alfred Ormesby Cochrane, and Edmund Grove, carrying on business as Iron Founders and Engineers, at the Ormesby Iron Works, near Middlesborough, in the county of York, under the style or firm of Cochrane, Grove, and Co. The business was continued by the other partners[6]

"THE ORMESBY IRONWORKS.
The Iron Coal Trades Review has an interesting account of these extensive works : —

In close proximity to the Tees Ironworks, Middlesbrough, which we noticed a fortnight ago, we come to the extensive establishments of Cochrane and Co., and Cochrane, Grove, and Co. ; the former being devoted exclusively to blast furnace operations, whilst the latter are ironfounders and engineers upon a large scale.

The Ormesby Works were amongst the early ironmaking establishments of Cleveland, though the original furnaces have disappeared, and upon the site they once occupied, two of the largest blast furnaces that even Cleveland can boast, are now rapidly approaching completion.

The founder of the firm was the late Mr A. B. Cochrane, a gentleman who attained a high position in connection with the South Staffordshire iron trade, and who was deservedly respected as a man of sound judgment, unflagging energy, and sterling uprightness in all his business relations. It is easy to understand that when the late Mr Cochrane commenced a branch establishment on the banks of the Tees, it was on a comparatively modest scale, but the work of extension has gone on steadily and rapidly, until at the present time from 1100 to 1200 hands are employed at the Ormesby Works, exclusive of those connected with the blast furnace department proper. The works embrace about 25 acres of land, lying between the North-Eastern Railway, which runs alongside the blast furnaces, and the river Tees.

Taking, in the first place, the engineering and foundry department of Cochrane, Grove, and Co., we find a range of shops, that have evidently been added from time to time as the business extended. In these, at the present, the men are chiefly engaged upon work connected with blast engines, a speciality for which the firm have gained an excellent name, for the superior class of their workmanship.We noticed at least a dozen blowing engines in various stages of progress. The firm are now making engines for the new works of Gjers, Mills, and Company, Swan, Coates, and Company, Carlton Ironworks, Furness Iron and Steel Company, Robert Heath, Stockton Furnace Co., &c. A large erecting shop has been recently put up, for the blast engine department alone. The foundries cover a large area, and are chiefly devoted to the manufacture of pipes, and engineering castings. Some of the pipes recently made are four feet in diameter. Great care is used in getting them sound throughout, and they are consequently cast considerably longer than required, the part that would be most likely to contain any defect being afterwards cut off. These pipes are turned, grooved, and cut in the same machine, the three operations going on simultaneously. Great attention is devoted to the testing of all the pipes sent out by the firm. This is done by hydraulic pressure, and whether there is any stipulation for a special test or not, it is always applied. The foundry in which the larger pipes are made contains a number of casting pits, very economically arranged. The moulds are dried by being placed upon a plate containing a number of apertures, according to the size of the pipe to be produced. When the boxes are arranged upon the plate, a wrought iron cover is placed over them, and a stream of hot air is forced through each mould by means of a blast pipe, which passes through a charcoal fire kept burning at the top of the cover. By this means the moulds are speedily dried. The dried core is then put in, and the casting is soon finished. By this arrangement very little space is taken up; as the moulds have only to move a short distance whilst in the pit. For the larger sizes, only one mould is dried at a time, but for the smaller kinds, several boxes are put upon the plate and dried simultaneously.

In one of the foundries the heavier castings for blast engines are produced. These frequently run up to above 20 tons. The smaller sizes of pipes are made here in immense quantities. Considerable numbers are also made at an adjoining foundry belonging to the same proprietors, but situated on the opposite side of the railway. The arrangements for shipment are exceedingly good, as there is excellent wharfage, and steam and other cranes, capable of loading weights up to 20 tons. The foundries contain a number of steam and other cranes. The mechanical arrangements indeed throughout are of a very superior kind.

The whole of the engineering department is under the special management of Mr. Henry Cochrane and Mr Grove; Mr A. C. Downey being the engineer to the establishment.


The blast furnaces consist of two newly-erected furnaces, 75ft. in height. These are built in a most substantial manner. The blast is supplied by a splendid pair of blowing engines, built by Cochrane, Grove, and Co.; blowing cylinder, 100 inches in diameter; steam cylinder, 45 inches — length of stroke, 4ft. 6in. After a minute description of the mechanical contrivances, the writer adds — The new blast furnaces are capable of making from 430 to 450 tons of iron each per week, from Cleveland stone, and we believe, with an expenditure for fuel which will compare very favourably with the best results being obtained in the district. The hoist is worked on the water balance system, and it is very powerful, six barrows of materials being taken up at once. The charging platform is composed of wrought iron plates. At the top of each furnace, there is a special arrangement for preventing the escape of the gas at the time of charging. This consists of a dome, a few feet above the top of the bell. The materials are put through doors in this dome. These are closed when a charge is to be lowered into the furnace. The escape of gas is almost completely prevented, and the working of the stoves is not periodically interfered with, as it is more or less under the system generally adopted.

The firm of Cochrane and Co. are now building two new blast furnaces, 90ft. in height, and 30ft. in diameter at the boshes. Each of these will be equal to the two 75ft. furnaces in cubic capacity. The furnaces stand upon fourteen iron columns, weighing five tons each. They are cased with plate iron for about 15ft. above the columns ; above that they are built of brickwork, bound in the usual way. There will be 6 tuyers to each furnace. The stoves for these furnaces are also being constructed upon Cowper's principle. The kilns, coke bunkers, &c, are in a line with the furnaces. These are rather low, but it was necessary either to put up an entirely new range, or to adapt the new ones to those previously in existence. There is a well-arranged laboratory near to the furnaces. The first of the larger furnaces will be ready to be blown in before long. It should be remembered that the design for the new furnaces is by Mr Charles Cochrane. The engineer to this part of the establishment is also Mr A. C. Downey, who has been connected with the works for a considerable length of time. When finished, the blast furnace plant will be very complete. The work throughout is done in a thoroughly substantial manner, though, in adapting old work to the new plans described above, many expedients have to be used, that would be unnecessary in planning entirely new furnaces and accessories."[8]