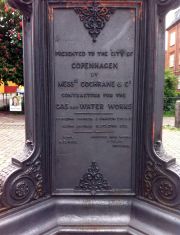 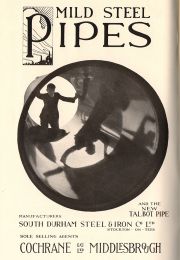 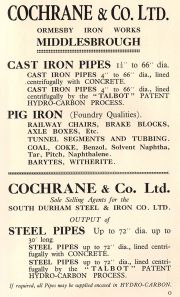 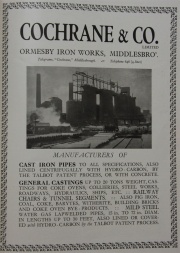 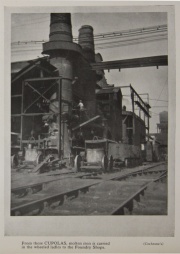 Alexander Brodie Cochrane became a partner of John Joseph Bramah and commenced business as an Ironfounder at Bilston. Subsequently, in conjunction with Mr. Cochrane’s father, they founded the Woodside Ironworks and Foundry, which was carried on with much success until the death of Mr. Bramah in 1846.

Cochrane was then joined by Charles Geach and A. Slate, the firm being carried on under the name of Cochrane and Co, by whom also the works belonging to the firm at Middlesborough, and known as the Ormesby Ironworks, were established; the construction being supervised by Joseph Wright (1826-1893).

This may be the company, recorded as Cochrane and Co of Middlesbrough, who supplied a three-cylinder horizontal pumping engine to the City of Norwich Waterworks (Heigham) in 1850 [1]

After the death of Mr. Geach, Mr. Slate left the firm, which had at that time attained a wide reputation, and was particularly known as having supplied most of the ironwork required for the 1851 Great Exhibition building.

1854 'The Australian demands for public works are unprecedentedly large. The firm of Cochrane and Co., of the Woodside Works, near Dudley, have received orders to supply 20,000 tons or iron piping for the Melbourne Waterworks.'[2]

1855 Charles Cochrane went to work for Cochrane and Co at Ormesby Ironworks which had recently been established by his father, Alexander. The following year he became a partner with his father in these works and the Woodside Iron Works.

1858 'At the Woodside works the iron work for the new Westminster-bridge is stated to be progressing very satisfactorily, and happily furnishes employment for great numbers who would otherwise be destitute of employ.'[3]

1860-80 Built five railway locomotives for their own use.

c.1920 Owned the Ormesby Iron Works, adjoining the Cargo Fleet Works, with three large blast furnaces from which molten metal had previously gone to Cargo Fleet. Cochrane and Co. produced principally cast-iron pipes, railway chairs and large iron castings, in competition with the Derbyshire firms of Sheepbridge, Staveley and Stanton. It owned the Stanghow mines in Cleveland and the Desborough mine in Northamptonshire, as well as the New Brancepeth colliery and coke ovens in Durham.