Grace's Guide is the leading source of historical information on industry and manufacturing in Britain. This web publication contains 137,322 pages of information and 220,557 images on early companies, their products and the people who designed and built them. 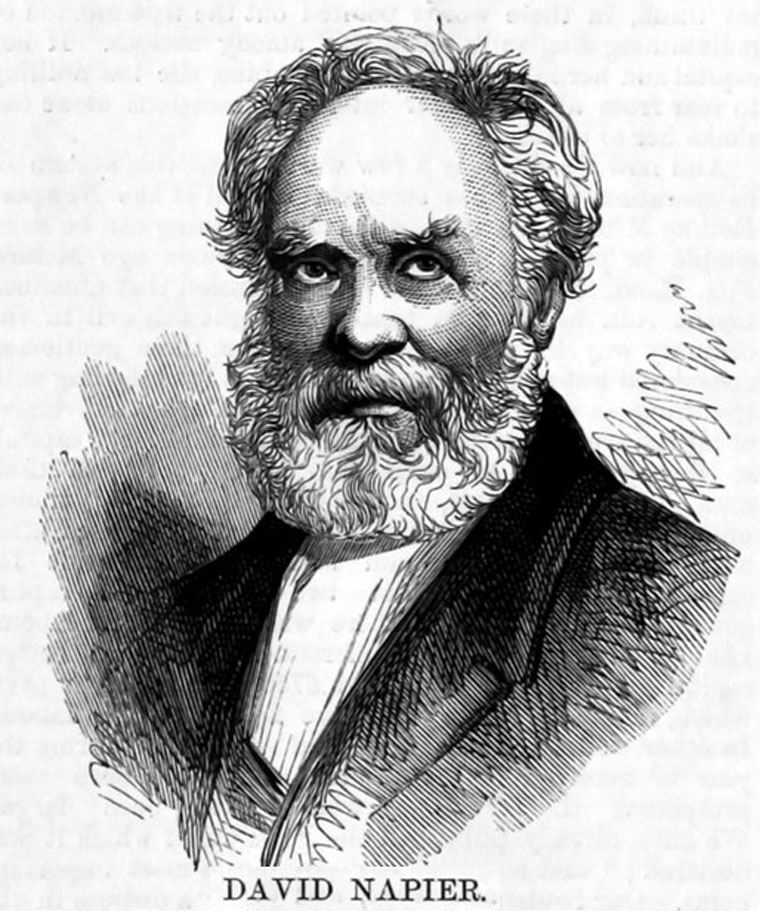 1790 Born at Dumbarton on 29 October 1790, the son of John Napier (d. July 1813), an engineer in Dumbarton, and his second wife, Ann McAlister. Cousin of Robert Napier, the celebrated shipbuilder and son of James Napier, John Napier's partner in the Dumbarton engineering business.

Like his cousins was trained in the Dumbarton business, which was one of the largest engineering works on the Clyde at the time, and engaged throughout their early years in boring cannon cast by the Clyde Iron Works for war with revolutionary France. While they remained in the west of Scotland all three continued to work in one of the family's various engineering and iron-working enterprises.

c.1802 His father moved his business, that of a smith and founder, to Glasgow where David assisted in the business.

1810 By this time he had complete control of his father's business in every respect.

About 1812, Henry Bell heard of Fulton's success in steam navigation in America, and began to build a small steamer for the Clyde. Napier supplied the boiler and smokestack.

1814 David married Miss Marion Smith; they had a family of six sons and nine daughters.

1814 Napier made a boiler and the castings for the engine of the PS Comet[1]. Two promissory notes from Bell were still in the possession of Napier Brothers in 1897

1816 David's first marine engine, for the steamboat Marion, was completed early in 1816. Others were made for the PS Dumbarton Castle, the first steamer that went up Loch Fyne, and for the PS Britannia, the first that went to Campbeltown.

About 1818 started to build a steamer himself, called the PS Rob Roy, which was followed by other steamers for the open seas.

1821/2 As the engineering business increased, he moved to the new, more spacious works which he had erected at Lancefield, on the banks of the Clyde

1821/2 he let the old works to his cousin Robert Napier who started to make engines at Camlachie.

c.1827 Initiated a steam carriage on a new road made from the Holy Loch to Loch Eck which was said to be the first that carried passengers for hire on common roads.[4]

1835 Having built up a reputation for his contribution to the development of steamers, this was undone by the explosion in the boiler of the Earl Grey at the quayside at Greenock, which killed six people.

1836 Left the business on the Clyde and purchased land on the banks of the Thames at Millwall, to experiment with steamers. This was adjacent to William Fairbairn's yard at Millwall.

1852 Napier's yard closed because of competition from the Clyde yards. The works stood idle for fully a year until, in 1853, a further use was found for them. The Napier Yard adjoined the old Fairbairn yard where Mr. J. Scott Russell was then commencing the construction of the SS Great Eastern for Isambard Kingdom Brunel. The space and resources of both yards were found to be necessary for that undertaking, so an arrangement was made to combine them temporarily. Part of the Napier property was accordingly leased, in 1853 or 1854, and a small portion, that had been otherwise occupied, was arranged for at a later date.

The new premises came to be known as the Napier Yard. The Great Eastern was the largest steamer on the seas for over forty years. John Scott Russell was bankrupted by the huge building costs.