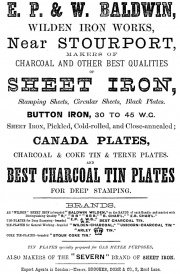 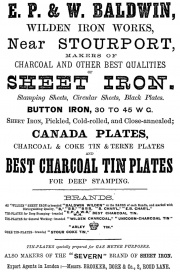 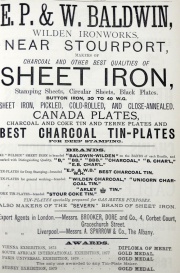 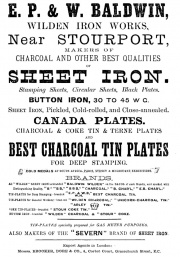 1788 Thomas Baldwin (1751-1823) moved from Shrewsbury to Stourport to take advantage of its location on the emerging canal system[1]. At some point, Thomas established the company Baldwin, Son and Co

The successful iron foundry which he established there was expanded by his sons George Pearce Baldwin (1789–1840) and Enoch Baldwin (1793–1857).

1850 E. P. and W. Baldwin were recorded as Tin-plate manufacturers, Horsley Fields, Wolverhampton but without a presence in Stourport[3].

1854 They acquired the wrought iron and tin plate works at Wilden in 1854, Wilden Iron and Tin Plate Co.

c. 1857 At the age of 16, Alfred Baldwin (1841-1908), 12th son of George Pearce Baldwin by his second wife, became a partner in the main family firm, Baldwin, Son and Co of Stourport, which also operated ran worsted spinning mills at Stourport[4]. Other members of the Baldwin clan ran a carpet manufactory at Bridgnorth, and a paper mill at King's Norton.

1863 William H. Baldwin died; he had been senior partner in Baldwin, Son and Co and Baldwin Brothers of Stourport, and E. P. and W. Baldwin of Wilden and Wolverhampton[5] and was the last surviving founder of E. P. and W. Baldwin. Following this, the family business split[6]; E. P. and W. Baldwin passed into the control of Alfred Baldwin and his two surviving brothers, George (1826–1881) and Stanley (1828–1907). However, the latter's bad management and drinking, combined with a trade depression, brought the firm close to bankruptcy in the late 1860s[7].

1870 Matters improved only after 1870, when Alfred Baldwin raised £20,000 and bought out his brothers to take sole control of E. P. and W. Baldwin in September 1870. He moved to Wilden House overlooking the forge at Wilden. He was responsible for the rapid growth of the firm and established a reputation as a benevolent employer and as a patriarch of the Wilden district[8].

1873 the Swindon tin-plate works near Dudley was acquired.

1879 the Wilden Ironworks, and also the Swindon Ironworks of Messrs E. P. and W. Baldwin, were damaged by flooding when a wall collapsed at Stourport[9]

1886 a separate company, Alfred Baldwin and Co Ltd, was established to erect and operate a tin-plate works near Pontypool, Monmouthshire.

1886 Wilden Ironworks was known for their excellent tinplate made at Wilden and at Swindon near Dudley and at the Horseley Fields Works carried on by E. P. and W. Baldwin[10]. A depression in trade, and the availability of the new works in South Wales, caused the firm to give their employees at Wilden notice of dismissal.

1889 An open offer of shares in a new company: Baldwin, Hatton and Thompson was announced, which was formed to amalgamate E. P. and W. Baldwin of Stourport, Wilden and Swindon Iron and Tinplate Co; Messrs Hatton, Sons and Co of Bilston, Bradley and Broadwaters Iron, Steel and Tinplate Works; Messrs Stephen Thompson and Co Ltd, of Wolverhampton, Manor Iron and Tinplate Works[11]. The purpose was to avoid "injurious rivalry" not to raise prices[12] although a later article admitted the aim was to make "larger profits"[13]. But presumably this did not happen as Stephen Thompson and Co continued as a separate entity and E. P. and W. Baldwin was incorporated into Baldwins when this was formed in 1902.

By 1890 Baldwin had introduced a works medical service, a friendly society, a scheme for the encouragement of the education of workers' children, and the maintenance of high standards of safety and cleanliness[14].

1892 The Pont-y-moel tin-plate works was restarted in conjunction with Wright, Butler and Co. The business relationship between Alfred Baldwin and Colonel Roper Wright later led to a fusion of their business interests.

1901 Purchased the business of Messrs Knight and Crowther, consisting of the Stour Vale Iron works, Kidderminster, and the Cookley Iron Works, Brierley Hill[15].

1902 Baldwins Ltd was established and registered on 7 April to acquire a number of businesses including E. P. and W. Baldwin[16].