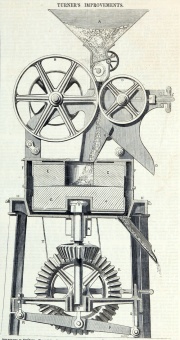 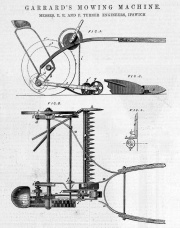 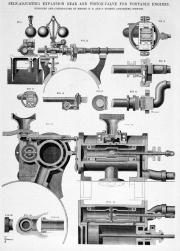 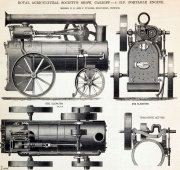 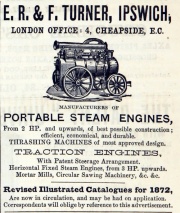 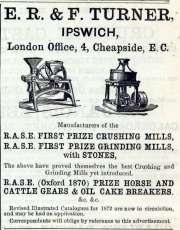 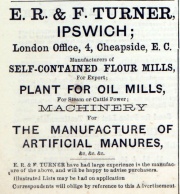 1872. Hartnell and Guthrie's Governor at The 1872 Smithfield Show 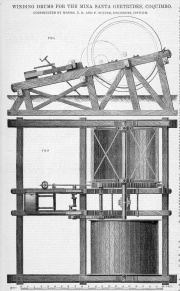 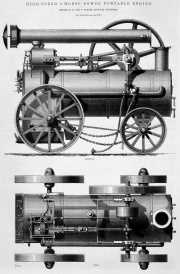 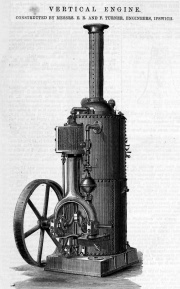 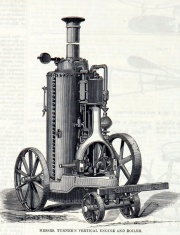 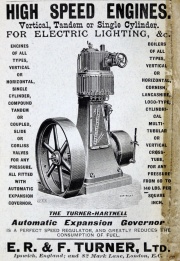 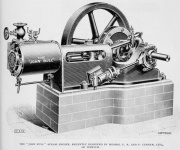 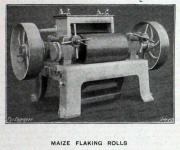 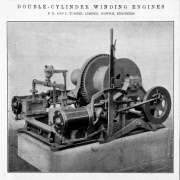 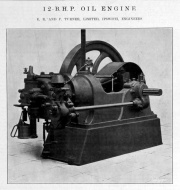 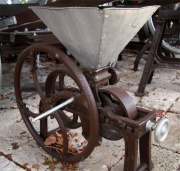 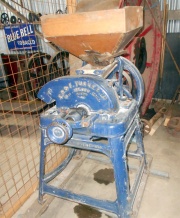 Exhibit at the Museum of East Anglian Life. 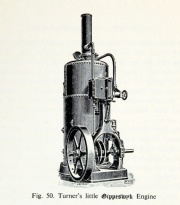 1837 Company established by Walton Turner and two partners under the name Bond, Turner and Hurwood.

1842 Built their first steam engine which was used to drive the St Peter's Works.

1849 Produced their first portable engine to their own design.

By 1851 the other partners had dropped out and Edward carried on the business himself.

1851 Exhibited at the 1851 Great Exhibition. Details of their products shown at

Frederick Turner joined his brother in the firm which became E. R. and F. Turner

1862 Built a roller mill for Joseph Fison and Co based on the design of G. A. Bucholtz which allowed separation of bran and germ, responding to the demand for white bread.

1863 Extension of the St. Peter's Works into Greyfriars.

1874 Portable engine No. 981 - now on display at the Museum of East Anglian Life. This features a Hartnell governor.

1876 Exhibitor at the Royal Agricultural Show at Birmingham with a new vertical engine and boiler. [1]

1888 E. R. & F. Turner purchased the Stock and Interest of J. Harrison Carter; they retained many of the staff. It would appear that the business of milling machinery was gradually moved from Dunstable to Ipswich.

1894 Smithfield Club Show. Showed a mill for breaking down maize. [5]

1899 Designed the "John Bull" Steam Engine to meet the large and increasing demand for a small size engine, which was 'low in price, and yet strong and solidly constructed, and suitable for a boiler up to 100lb per square inch - exhibited at the 1899 Royal Agricultural Show.'[6]

1912 The last engines were made and the company concentrated on the flour milling side of the business.

1922 The Foundry was moved to a new site on Foxhall Road, and the Offices to Greyfriars Works, which had been an extension of the St. Peter's Works since 1863. The original St. Peter's Works, on the north side of College Street, continued in use.

1926 Acquired Bull Motors. The electric motor erecting shop was at the rear of the St. Peter's Works.

1932 AGE was wound up. Turners continued as a separate company under the ownership of the Leggett family, including Bull Motors.

c.1933 Some form of venture in agricultural machinery may have been established with Sturtevant Engineering Co at this time.

1937 New works were opened in Foxhall Road and the other sites were closed.

1966 The Leggetts sold the firm to an investment company, Forgeway Finance, who sold off much of the property.

The manufacturing firm moved to a new site on Knightsdale Road, where the company continued to thrive.

1986 Acquired Miracle Mills Ltd. of Penge, producers of machinery similar to the Harrison Carter range of crushing and grinding machines. The business was relocated to Ipswich and a new range of hammer mills were produced under the Miracle Mills brand.

2002 Acquired Christy Hunt (Agricultural) Ltd. of Scunthorpe and relocated to Ipswich. They continued to produce hammer mills, pulverizers and grinders.

2004 The group was renamed Christy Turner Ltd. However, this was seen as causing confusion for consumers who thought the old brands no longer existed

2016 The three separate brand names were reintroduced, to counteract confusion amongst customers.