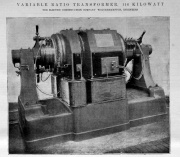 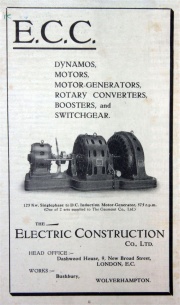 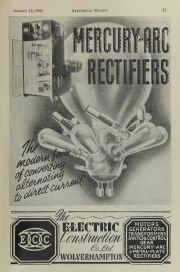 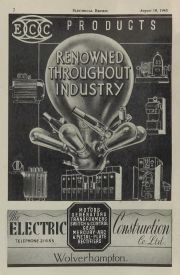 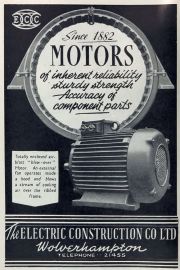 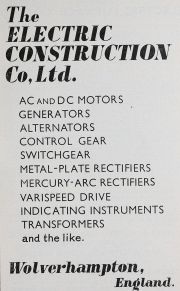 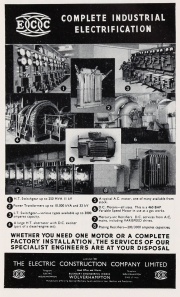 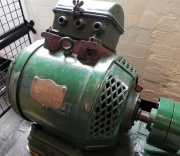 1912. Exhibit at the National Brewery Centre. 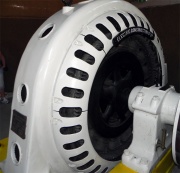 1893 Public company formed by reconstruction of Electric Construction Corporation. On 20 July a new company was registered to take-over its business called Electric Construction Co. Emile Garcke accepted position as managing director, leading the reorganisation of the company; he was a great enthusiast for developing uses of electricity - for example, in 1895 he also formed British Electric Traction Pioneer Co[1]

1894 Liverpool Overhead Railway took over running of their railway from the contractors Electric Construction Co as the operation had been so satisfactory[2].

1895 Wolverhampton works covered 23 acres and employed 700. One of the most important products was the "continuous-current" transformer, as first designed for the Chelsea and Oxford central lighting stations[3].

1896 Thomas Hugh Parker, son of Thomas Parker, has been credited with the design and manufacture of "E.C.C.'s most famous motor car - the Electric Dog Cart of 1896"[4]. The car was entered in a race for self-propelled road vehicles, from the Crystal Palace to Birmingham, organised by 'The Engineer' magazine but only five runners turned up at the start, so the event was cancelled but the car was highly commended. This is presumed to be the vehicle for which the running gear was made by Star Cycle Co. E.C.C. experimented with prototype cars for a number of years, with the idea of producing cars commercially but no further prototypes were built[5].

1897 One of 4 companies which offered vehicles for trials organised by the Engineer magazine at Chelsea [6].

1898 South Staffordshire Tramway Co had been experimenting with a system of "auto-traction" for 2 years but the system had proved a failure so the operations continued to use steam engines. An agreement between Electric Construction Co and South Staffordshire Tramways Co (June 1897) had been reassigned to British Electric Traction Co (successor to British Electric Traction Pioneer Co) and had been completed[7].

1899 The company was registered on 29 May, for the purpose of supplying all kinds of electrical machinery for lighting, traction and other purposes. [8]

1914 Manufacturers of all kinds of electrical plant, including dynamos, motors and switchboards[10]

Post WWII: a separate factory was built in Shaw Road for the manufacture of transformers, and later included a rectifying plant.

1960s Over 2000 people were employed, producing medium and heavy electrical equipment including motors, generators, control gear, rectifiers and transformers, and components for the communications industries.

1968 Supplied batteries and rectifiers for the Winfrith power station[13].

1968 Taken over by South Wales based Aberdare Holdings who manufactured modern truck and metal clad switchgear.

Extract from the account of the 1897 trial at Chelsea[14]

The Electric Construction Company's dog-cart was designed to carry two persons seated side by side. The motive power was derived from accumulators. It could travel at up to 12 mph on a level tarmac surface. The accumulators would carry it no more than twenty miles without re-charging. There were two driving wheels, and one steering wheel in front. The two-pole motor was geared by means of a Renold chain to the driving axle. The switch gear consisted of a reversing and a controlling switch, placed under the driver's seat, the former manipulated by a vertical lever on the right; the controlling switch allowing several different arrangement of cell connection. The reversing facility could be used for checking the speed of the cart on long descents.

The motor is carried by a frame, articulated at one end to the road axle-bearing cases and at the other end slung by an elastic attachment to the under stde of the foot board.

In working, the distance between the motor and road axles could be adjusted to compensate for wear in the chain. The driving wheels were 39in. diameter and the steering wheel 45in., made of steel with solid rubber tires.

The motor bearings received continuous lubrication from an endless chain dipping into a reservoir of oil. The motor was series-wound, with a slotted armature, drumwound, with Eickemeyer coils and used carbon brushes. The accumulators were of the Faure-King type, manufactured by the Electrical Power Storage Co Ltd, in total 40 cells, total weight about 5 cwt. The rated capacity was 40 ampere hours at a discharge rate of 5 amps. Terminals were provided for charging them in place, for which current at 100 volts was required. They required about 7 hours to re-charge.