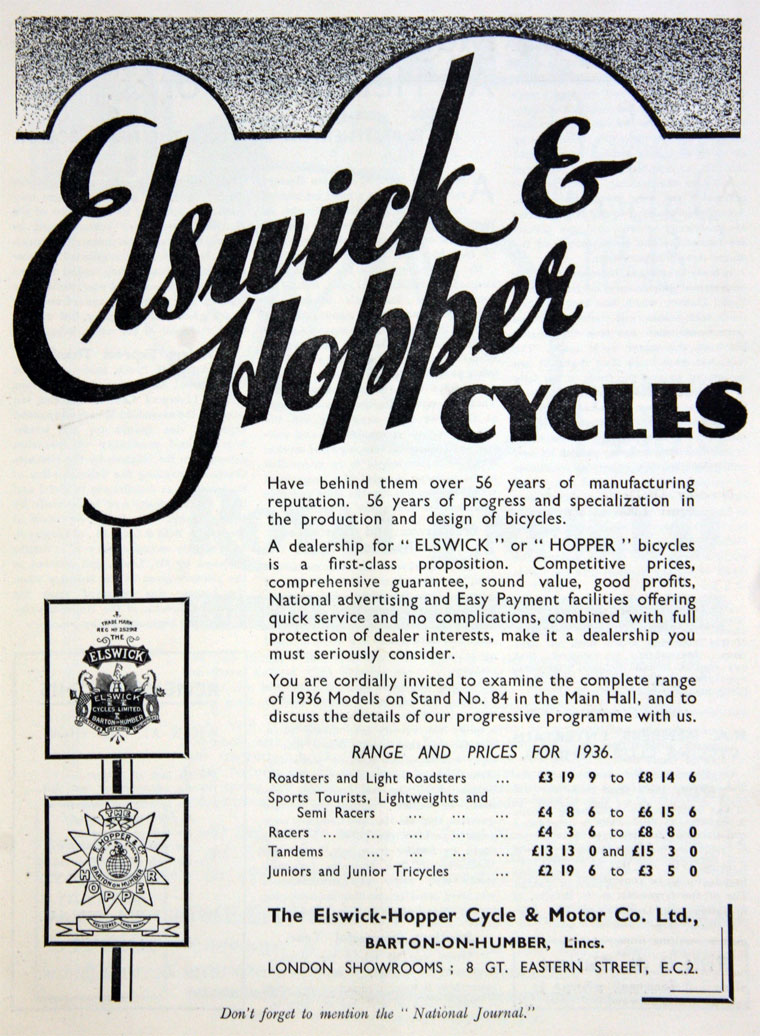 1910 F. Hopper and Co took over the assets of Elswick Cycle Co, a Newcastle business founded in 1880, and maker of well designed and well crafted bicycles much favoured by "Society".

1913 November. The flotation was not successful. '...in the Matter of Elswick-Hopper Cycle and Motor Company Limited. Notice is hereby given, that a petition for the winding-up of the above named Company by the High Court of Justice was, on the 25th day of November, 1913, presented to the said Court by the Bosch Magneto Company...'[1]

Hopper was discharged in July 1914.

WWI The war years were good for the business though many employees died in the trenches.

1925 Fred Hopper died and his son Fred (known as Freddie) became managing director. The inter-war years were good for both domestic and export sales, though little money was invested in new equipment.

1958 After a long period of falling sales the board of directors sold the company to a new group of investors. One of their first innovations was to set up a racing team, which had a highly successful year. It was disbanded after the 1959 season as there seemed to be no financial gain to offset the investment. The team rode a version of the top-of-the-range Lincoln Imp racing bike.

1959 A new moped, equipped with a French VAP engine, was road tested successfully at MIRA. It was given a set of casings and shown at the Earls Court Show that year as the Lynx. Plans to go into production were dropped and, instead, complete Auto-Vap machines were imported from France.

1961 Listed as a manufacturers of bicycles, tricycles and mopeds, and the Capri Italian scooter. Trade Names: Elswick Hopper and Lynx. 500 employees.

1968 Coventry Eagle relocated to the Elswick aerodrome buildings following loss of their Smethwick factory. They owned the Falcon marque, which had been developed by Ernie Clements in 1957. On the retirement of owner Douglas Mayo, Ernie took over Coventry Eagle and began to trade as Falcon Cycles.

1974 With an upturn in demand and the lack of a modern factory in Barton, Elswick-Hopper decided to re-enter the market with the acquisition of Wearwell Cycle Co, based in Alveley, Shropshire. The Cosmopolitan shopper was made there. The St Mary’s site was developed as an industrial estate.

1978 The acquisition by Falcon of the old Corah factory in Brigg had involved a large investment in new equipment and Ernie Clements decided to sell to Elswick-Hopper, thereby joining the board of directors. He did not fit well into the corporate culture and parted company in 1982, taking a new factory in Newtown, Powys, and the Coventry Eagle name as part payment for his shares.

Falcon moved to Brigg in 1979 and remained part of the parent Elswick-Hopper company until sold to Casket plc in December 1991.

1980 The centenary was celebrated with a range of ‘Sovereign’ bicycles and with a four day Easter Bank Holiday road race.

By now, under the leadership of Jim Turner, Elswick-Hopper had become a diverse conglomerate with businesses in all aspects of agricultural services, machinery, construction and tool making.

1987 Elswick plc was steered away from agriculture towards the packaging industry. By this time Falcon had absorbed the Holdsworth and Claud Butler marques through the purchase of Holdsworthy.

1991 Falcon was sold to Casket plc

The excesses of the 1990s saw a series of financial deals take place, eventually resulting in the formal dissolution of Elswick plc in 2001.