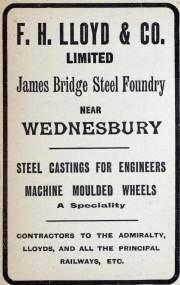 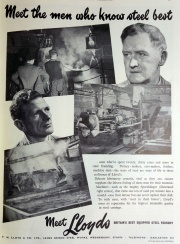 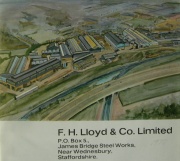 c.1970. The road in the foreground is the M5 motorway. The works site is now occupied by 'retail outlets' and entertainment centres 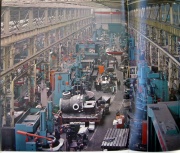 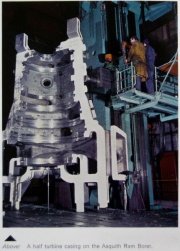 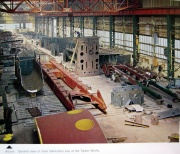 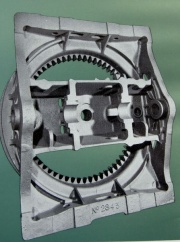 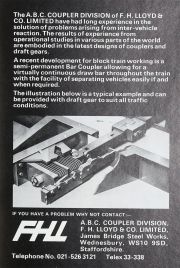 1885 Partnership change. '... the Partnership subsisting between us the undersigned, Francis Henry Lloyd and Harold Hasluck, formerly carrying on business as Manufacturers of Steel Castings, Tubular Coils, and other Articles, at James's Bridge, near Wednesbury, in the county of Stafford, under the style of F. H. Lloyd and Company, has been dissolved as from the 31st day of December last; and that the said business will, as from that day, be carried on by the undersigned, Francis Henry Lloyd alone, and on his own account, at the same place, and under the same style as heretofore...'[1]

1888 Incorporated as a limited company.

1937 Another record year's output for castings[4].

WWII Made turrets for tanks, bomb casings, and many other castings[5].

1946 Plans for modernization of the Darlaston works as well as continued operation of the foundry at Burton which was being equipped for making castings for railway use[6].

1963 Death of Cyril Lloyd, age 86, who had had a long career with N. Hingley and Sons, and was a descendant of the Lloyds banking family, had contributed his experience in later life to F. H. Lloyd and Co which was run by relatives[9].

1972 Announced plans with Cooper Industries to establish a steel "mini-mill" to make billets in West Bromwich[15]. Later information states that it was in Peartree Lane, Dudley and named Lloyd Cooper.[16]

1974 Cast and machined the steel cable bands for the Humber road bridge.[17]

1980s: F H Lloyd, at one time the largest steel foundry business in Europe, fell into a severe decline resulting in the closure of the Wednesbury foundry in 1982 and the Parker foundry at Derby in 1987.

1987 Lloyds (Burton) was the last remaining steel foundry still operating of the three foundries which were once part of the F H Lloyd Group.

By 1989 although Lloyds (Burton) was trading profitably it was no longer relevant to the Triplex Lloyd strategy and was sold to William Cook.