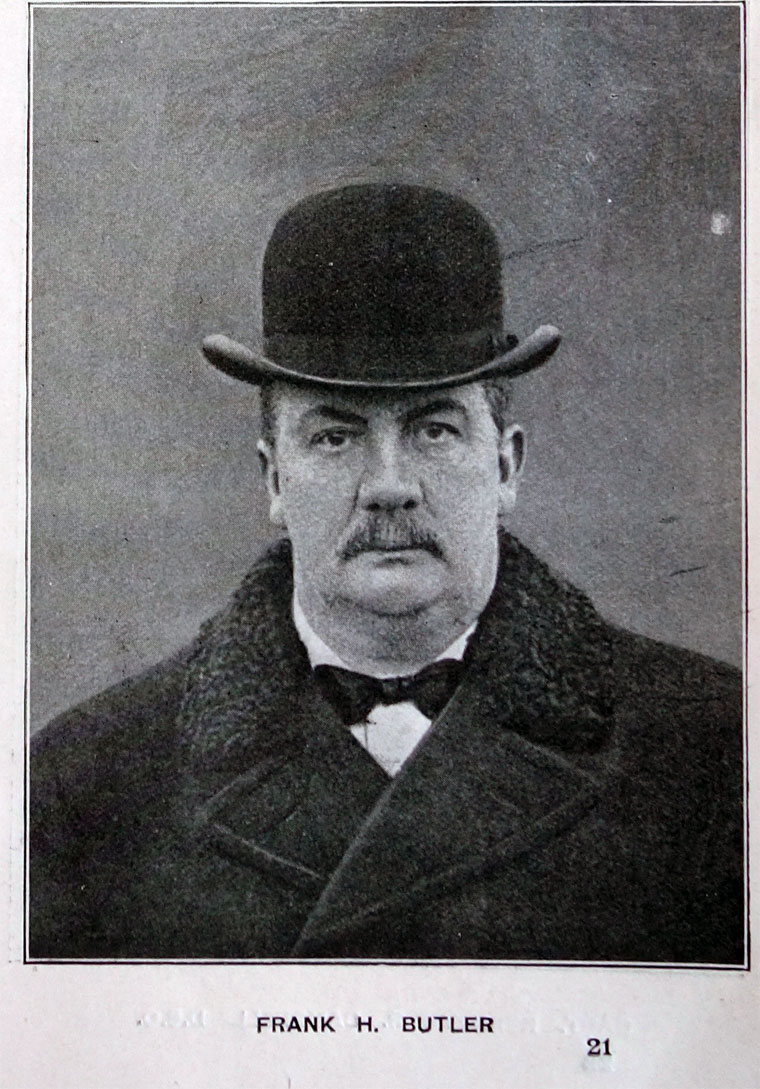 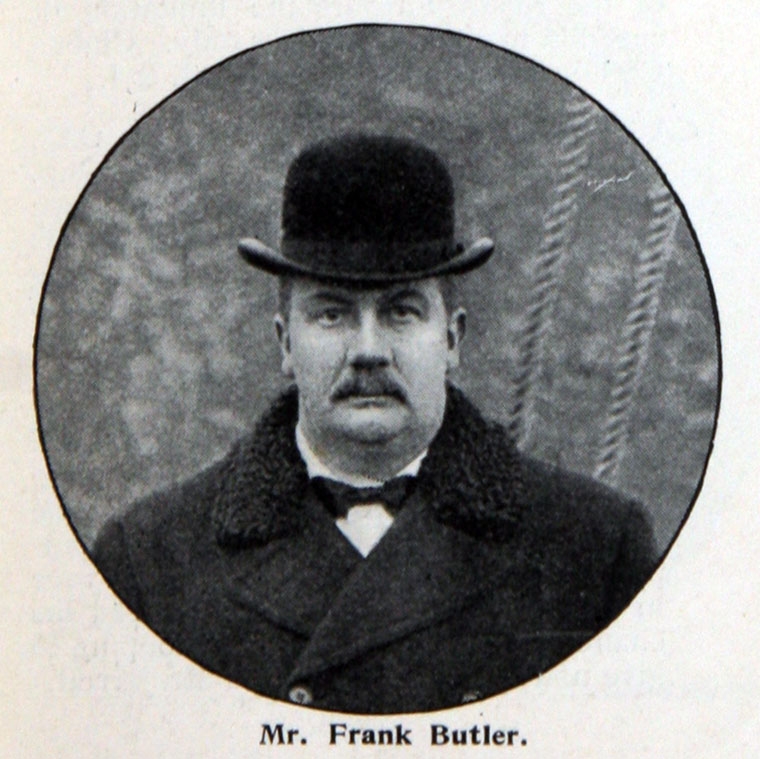 1909. The Short Brothers, the Wright Brothers, Frank Butler and others at Shellbeach

1855 Born in London on 17 December, the son of James Butler, a wine merchant, and one of the first persons in England to own a motor-car, he became the first Hon. Treasurer of the Royal Automobile Club (RAC).

1901 September: he made an ascent in a balloon "The City of York" from Crystal Palace in London, accompanied by his daughter Vera and Charles Stewart Rolls. While flying over Sidcup, Vera suggested the formation of an Aero Club and so the Aero Club of the United Kingdom was founded, which in 1910 became the Royal Aero Club.

1904 BUTLER, Frank Hedges, F.R.G.S., Prince's Chambers, 56a, Pall Mall, London, W. Cars: Benz, Panhard, Renault. Hobbies: Ballooning, skating, sailing, and music. Aims at getting motor-cars in the air in the form of aeroplanes and dirigible balloons. Is an expert aeronaut, and in 1902 led some interesting and exciting balloon chasing expeditious by motor-car in his own balloon, his clever manipulation of his air vehicle invariably resulting in his out-manoeuvring his motoring pursuers. Clubs: Royal Thames Yacht, Ranelagh, Aero, A.C.G.B. and I. [2]

Frank Hedges Butler was the author of a number of books including: "Fifty years of travel by land, water and air".

BUTLER, FRANK H.- Born on December 17th, 1855, Mr. Frank Hedges Butler is a member of the firm of Hedges and Butler, of London and Brighton. Amongst his principal pursuits and amusements are travelling, principally by automobile, hunting, skating, sailing, ballooning, and music. A life member of this Club, he was its first Hon. Treasurer from 1897 to 1901. Life member of the Royal Geographical Society, Chairman of the Imperial Institute Orchestral Society from 1894 to 1902, 0130 of the founders of the Afro Club, and pilot of the Aero Club of France. Mr. Butler commenced automobilism with a Benz car in Paris in 1896, owning later a 6 h.p. Panhard, which he drove through the 1000 miles Trial of 1900, and now uses a Renault Freres car. Venezuela, Burmah, and Yunnan, China, are amongst his most famous achievements in travel.

Extracts from his book 'Fifty years of travel by land, water and air'.

Sir David Salomons in October 1895, had organized a show at Tunbridge Wells, and this had awakened interest to the possibilities of a great industry, and on November 24, 1896, the British Parliament sanctioned mechanical traction at a speed not exceeding fourteen miles an hour on the common highways. This was celebrated by the historic run to Brighton.

The author was a member of the Automobile Club of France, and on December 15, 1897, the Automobile Club of Great Britain and Ireland was founded by Mr. F. R. Simms. About this time I was travelling in Russia and Finland, passing the winter season in Moscow and St. Petersburg. When I returned Mr. F. R. Simms kindly invited me to be the first Honorary Treasurer of the new Club, and I think the year 1898 was one of the most historical and interesting in my life. To be Honorary Treasurer of an institution which had very small funds was not a coveted post, but thanks to a few members and the wonderful organization of Mr. Claude Johnson (the Secretary), the Automobile Club soon grew to be one of the largest institutions of its kind in the world.

The first headquarters were at Whitehall Court, where we paid a rent of £400 per annum. When comparison is made with the present palatial building (1920) and rent in Pall Mall, it shows what can be achieved from small beginnings.

The different chairmen who have held office during the short history of the Club are Mr. Roger Wallace, Q.C., Sir Charles Rose, M.P., H.S.H. Prince Francis of Teck and the Hon. Arthur Stanley, M.P. The present Secretary (1920) is Sir Julian Orde.

In the first year of the Club's existence finance was a matter of considerable anxiety ; £540 had been spent in the establishment of the Club before any members' subscriptions were received. At the end of 1898 the total income from these amounted to £800, while during the first year £150 was spent in connection with the dispute as to whether Sir David Salomons or the Automobile Club had a right to the title.

The situation, however, was saved by the following gentlemen becoming life members, at a subscription of 25 each:


The value of life-member ship at that time was one of great uncertainty, as it looked as if the Club doors might be closed at any moment owing to lack of enthusiasm on the part of a number of its members. Considerable confidence in the future of the Club was aroused, therefore, by a movement of this kind, with the result that, by the end of the year 1898, a guarantee fund had been formed, amounting to £1,521, the largest subscribers being:

My own first car, which came into my possession in 1897, was a Benz from Mannheim, described on the invoice as a motor velocipede, price 120. I bought it from Mr. Harry Hewetson. The early days of this extraordinary horseless vehicle puzzled me and everyone else. To get it started was a work of art. A wheel at the back of the car had to be turned ; sometimes one forgot to turn on the petrol or the electricity, or the carburettor became flooded. When the car did start, one felt quite astonished, and half expected the engine or something to explode. Engineers with many letters after their names looked upon motor-cars as impossible and a sort of toy, although the gas-engine was nothing new, and the whole idea, including electric ignition, was foreshadowed in the 1851 Exhibition in an invention shown by a Frenchman, M. Lenoir, whose patents could later be bought for three-pence at the Patent Office. Daimler and Benz conceived the scheme of using the engine for mechanical transport, and sold the rights to Panhard, Levassor, and others. It was most interesting to experiment with the different cars in Paris and in England. What we most enjoyed, perhaps, was pushing the cars up the hills, so that when they did go down the other side we had the satisfaction of pleasure well earned. There were very few hills that the cars could negotiate without shedding the passengers, and often the driver himself had to dismount and steer the car up the road empty. When we passed down lanes and roads the natives rushed to get behind the hedges and ditches, frightened at a wonderful and noisy machine, and expecting to be run over. At Brighton, the coachmen on the parade, when a car passed, ran to their horses' heads to hold the animals lest they should run away.

For quite a considerable period we were only allowed by law to drive at a speed of fourteen miles an hour without incurring the risk of a heavy fine or imprisonment. We never started without taking provisions in the car to the extent at least of a box of Bath Oliver biscuits and one or two bottles of dry sherry. It was also necessary to have a bag for a night's lodging, as one never knew at what time one would arrive at the destination. Breakdowns were frequent, and were caused among other things by a want of water to keep the engine cool, a leaking pump, nuts and bolts working loose, chains breaking, belts stretching, the electric spark and trembler requiring adjustment, tyres coming off, platinum tube burners blowing out, and electric shocks from bad circuit. A tramp on the high-road was a useful individual, and many times he earned sixpence or more by fetching water from a mile away to put into the car ; in those times there were no radiators, only water-jackets. Brakes were made of camel-hair, which burned through, and the cars would then run away down the hills.

Motorists' clothes were usually covered with oil, and often we had to lie on our backs under the car in the middle of the road to effect repairs. Chauffeurs were not born, and owners had to do the work themselves and drive. When things went seriously wrong a village blacksmith was their best friend. A sort of steward's yachting-cap, with a black mask to keep the dust out of the eyes, was the usual head-dress, and at dinner after a run we looked like "white-eyed Kaffirs" as a result of white marks round our eyes caused by the goggles. There were no glass screens, and ladies wore veils over their heads to protect themselves from dust and wind. We had one advantage over the present car-owner: the price of petrol was only sevenpence a gallon from Messrs. Carless, Capel and Leonard.

Iron sprags were fitted under cars to prevent running backwards if the motor stopped when going up a hill. Sometimes the weight of the cars would cause them to run over the sprag, and backwards down the hill would go the whole concern. There were occasions, too, when we had to go up the hills backwards to get the petrol into the carburettor and engine. It was quite a common experience to be compelled to leave the cars out in the open roads, as the proprietors of stables and ostlers would not let them be put into the coach-houses. This arose entirely through prejudice and a belief that the new form of locomotion would take away their livelihood by doing away with horses, coaches, and chars-a-bancs. We took police constables for a ride to inaugurate them into the mysteries of the car. At Ranelagh, when first I took a car there, I had to leave it in the open, and I was told the Club was for polo, and horseless vehicles were not appreciated. Motor-cars, by the way, were not then numbered, and it was customary to give them a name. I called my own car "Eve."

If nomenclature had persisted, the dictionary would be exhausted to-day to find a name which had not been seized upon. Numbering, of course, soon became the only practical system of identification.