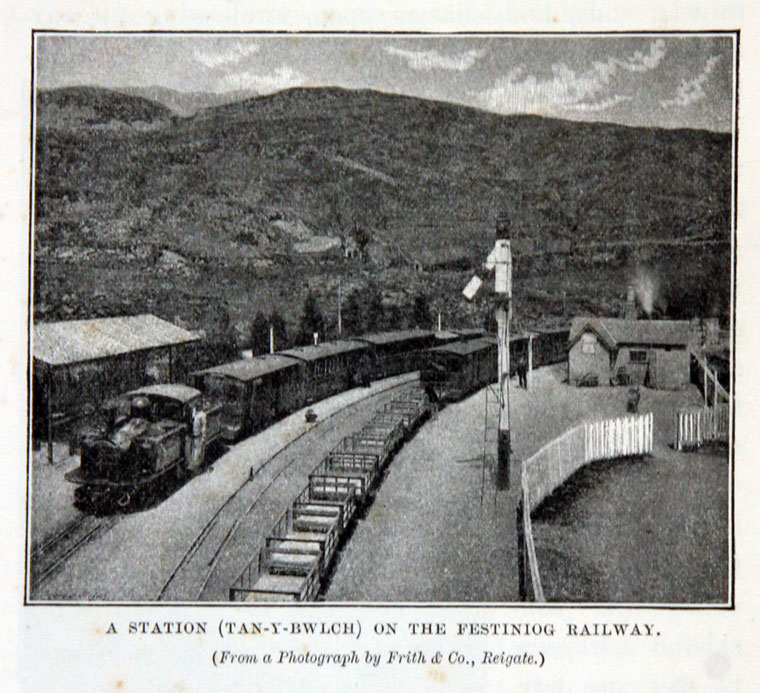 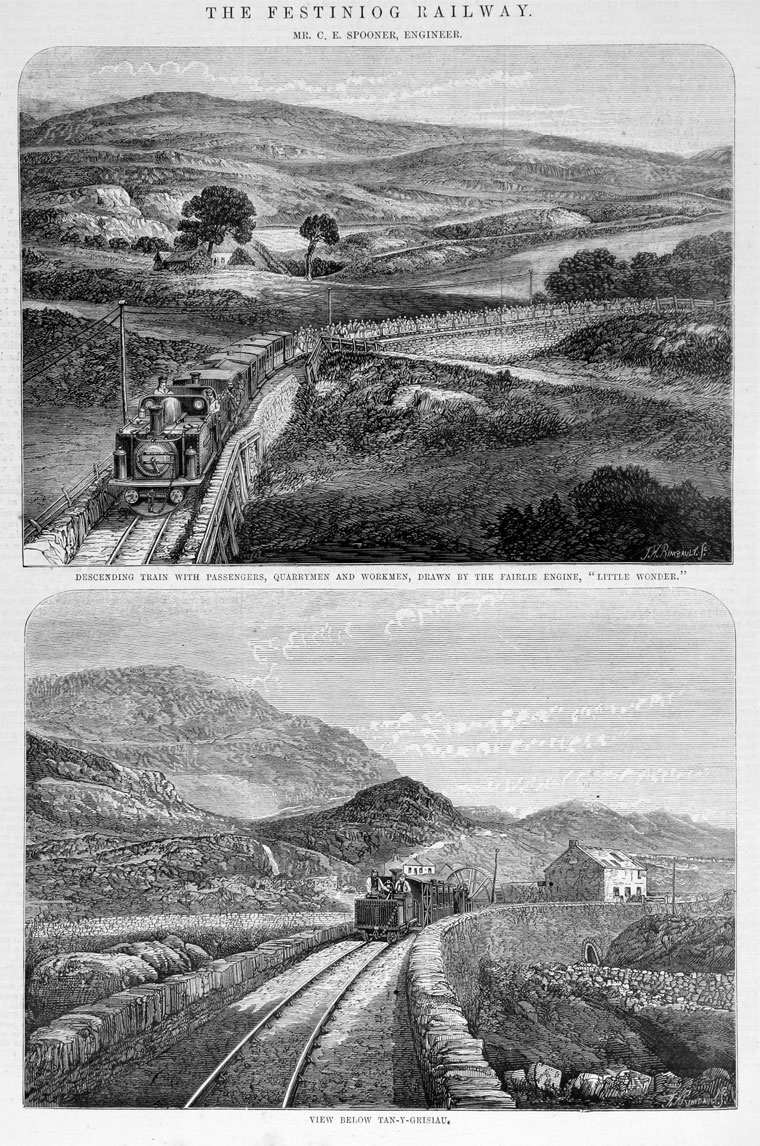 The Ffestiniog Railway is a narrow-gauge heritage railway, located in North West Wales. It is a major tourist attraction located mainly within the Snowdonia National Park.[1]

The railway is about 13.5 miles long and runs from the harbour at Porthmadog to the slate mining town of Blaenau Ffestiniog. The line travels through spectacular mountainous scenery and is single track with passing places. The track gauge is 1 ft 11 1⁄2 in (597 mm). The first part of the line runs along a mile-long embankment called "the Cob", which is the dyke of the Traeth Mawr "polder".

The railway company is properly known as the Festiniog Railway Company and this contemporary anglicised spelling is still the official title of the company as defined by the Act (2 William IV cap.xlviii) that created the railway. It is the oldest surviving railway company in the world, having been founded by the Act of Parliament on 23 May 1832 with capital mostly raised in Dublin by Henry Archer, the company's first secretary and managing director. Most British railways were amalgamated into four large groups in 1921, and then into British Railways in 1948, but the Festiniog Railway Company, in common with most narrow gauge railways, remained independent: in 1921 this was due to political influence, whereas in 1947 it was left out of British Railways because it was closed for traffic despite vigorous local lobbying for it to be included.

1832 The company was incorporated.

The line was constructed between 1833 and 1836 to transport slate from the quarries around the inland town of Blaenau Ffestiniog to the coastal town of Porthmadog, where it was loaded onto ships. The railway was graded so that loaded wagons could be run by gravity downhill all the way from Blaenau Ffestiniog to the port. The empty wagons were hauled back up by horses, which travelled down in special 'dandy' wagons. To achieve this continuous grade (about 1 in 80 for much of the way), the line followed natural contours and employs cuttings and embankments built of slate blocks without mortar. Prior to the completion in 1844 of a long tunnel through a spur in the Moelwyn Mountain, the slate trains were worked over the top via inclines (designed by Robert Stephenson) which can still be seen.

Up to six trains daily were operated in each direction, and a printed timetable was published on September 16, 1856 by Charles Easton Spooner who, following his father, served as Manager and Clerk for 30 years. It shows departures from the "Quarry Terminus" (at that time Dinas Junction) at 7:30, 9:28, 11:16, 1:14, 3:12 and 5:10. Trains waited ten minutes at the intermediate stations called "Tunnel", "Hafod Llyn" and "Rhiw Goch". The fastest journey time from Quarry Terminus to Boston Lodge was 1 hour 32 minutes, including three stops. From Boston Lodge the slate wagons were hauled to and from Porthmadog harbour by horses. Up trains took nearly six hours from Boston Lodge to the Quarry Terminus, and each train ran in up to four sections, each hauled by a horse and comprising eight empty slate wagons plus a horse dandy. This timetable gave a maximum annual capacity of 70,000 tons of dressed slate. Two brakesmen travelled on each down train, controlling the speed by the application of brakes as needed. At passing loops trains passed on the right and this continues to be a feature of Ffestiniog Railway operation.

There is evidence for tourist passengers being carried as early as 1850, without the blessing of the Board of Trade, but these journeys would also observe the timetable.

In October 1863 steam locomotives were introduced, to allow longer slate trains to be run, and this also enabled the official introduction of passenger trains in 1865: the Ffestiniog was the first narrow-gauge railway in Britain to carry passengers. In 1869 the line's first double Fairlie articulated locomotive was introduced, and these double-ended machines have since become one of the most widely recognised features of the railway.

Down trains continued to run entirely by gravity, but faster up journeys and longer trains increased line capacity. A new timetable dated October 1863 shows six departures daily from each terminus at two hour intervals, starting at 7:00 am and taking 1 hour 50 minutes including stops (totalling 20 minutes) at Tanygrisiau, Hafod-y-Llyn and Penrhyn. Trains passed only at Hafod-y-Llyn (from 1872 Tan-y-Bwlch). When passenger services started, the usual practice was for locomotive hauled up trains to consist of loaded general goods and mineral wagons, followed by passenger carriages, followed by empty slate wagons with brakesmen. Down trains were run in up to four separate (uncoupled) portions: loaded slate wagons, goods wagons, passenger carriages and finally the locomotive running light. This unusual and labour intensive method of operation was short lived and eventually the passenger and goods portions were combined into a single train headed by the locomotive.

The loaded slate trains continued to operate by gravity until the end of passenger services in 1939. Slate trains eventually became very long - trains of less than eighty slate wagons carried two brakesmen, but over eighty wagons (and this became common) required three brakesmen. About one wagon in every six was equipped with a brake, the others were unbraked. Trains continued to pass at Tan-y-Bwlch and to a lesser extent at Minffordd. The Summer timetable for 1900 had nine trains daily in each direction, and trains had been accelerated to one hour from Porthmadog to Duffws including stops at Minffordd, Penrhyn, Tan-y-Bwlch, Dduallt (request), Tanygrisiau, Blaenau (LNWR) and Blaenau (GWR). Speeds in excess of 40 mph were then normal.

The original passenger coaches (some of which still survive) were small four wheeled vehicles with a very low centre of gravity. In 1872 the FR introduced the first bogie carriages to operate in Britain. The continuous vacuum brake was installed in 1893. The line was fully signalled with electric telegraph and staff and ticket working. Electric Train Staff instruments were introduced in 1912 and they continue in use to the present day.

By the 1920s the demand for slate as a roofing material dropped owing to the advent of newer materials and to the loss of the overseas trade in World War I. As a result, the railway suffered a gradual decline in traffic.

In 1921 the Aluminium Corporation at Dolgarrog in the Conwy Valley bought for £40,000 a controlling interest in the FR and Henry Jack became Chairman, the FR company's financial administration moving to Dolgarrog. Jack was also chairman of the new Welsh Highland Railway and was instrumental in getting government backing for its completion on the understanding that the FR and the WHR would be jointly managed from Porthmadog, with maintenance undertaken at Boston Lodge and with other economies of scale. In 1923, the FR line was joined to the WHR line at a station called "Portmadoc New". The Welsh Highland line was almost totally dependent on tourism and this proved slow to develop.

To gain additional expertise in light railway operation which was being introduced on the FR and WHR to cut operating overheads, Colonel H. F. Stephens was in 1923 appointed part-time as Engineer to both companies. Stephens became Chairman and Managing Director of both companies in 1924. When the WHR was taken into receivership in 1927, Colonel Stephens was appointed as Receiver for the WHR and financial administration of both companies moved to Tonbridge in Kent. The fortunes of the WHR, despite great efforts, failed to improve and it became bankrupt in 1933. In order to protect their investments, the joint owners of both companies arranged for the WHR to be leased by the FR, but the WHR losses continued and it closed in 1937.

The FR continued to operate its slate traffic, a workmen's train on weekdays throughout the year and a summer tourist passenger service. Ordinary passenger services ceased on the FR on 15 September 1939, shortly after the outbreak of World War II. The workmen's passenger service ran for the last time on Saturday 16 September 1939. Slate trains were from then onwards operated three days each week, but gravity operation was discontinued. Slate traffic ceased on 1 August 1946, apart from the section from Duffws to the North Western yard through Blaenau Ffestiniog town centre, which was leased on 7 October 1946 to the quarry owners. This provided the railway company, which retained the services of a resident manager at Porthmadog, with a small income throughout the moribund years.

The original Act of Parliament, which permitted the building of the line, made no provision for its closure or abandonment. Although the main line had ceased functioning, the company could not dismantle the railway, so the track and infrastructure were left in place. However, without maintenance it soon became overgrown and unusable.

From 1949, various groups of rail enthusiasts attempted to revitalise the railway. In 1951, railway enthusiast Alan Pegler was approached by friends to buy and clear the outstanding debt on the derelict Ffestiniog Railway, to enable its purchase. Lent £3,000 by his father, he and the volunteers obtained control of the company on 24 June 1954. Pegler was appointed the new company's first Chairman, with the objective to operate the railway as a tourist attraction and gradually restore the line to working order. Pegler later released complete control of the company without any personal financial gain to Ffestiniog Railway Trust.

Restoring the line was not helped by a decision by the Central Electricity Generating Board (CEGB) in 1954 to build the Ffestiniog Pumped Storage Scheme, including the Tan y Grisiau reservoir (Llyn Ystradau), which flooded part of the northern end of the line.

On 18 August 1954, prior to commencing the restoration, in an inspection, the first of many, Colonel McMullen of the Ministry of Transport, Railways Inspectorate, accompanied by Alan Pegler, several directors and other supporters walked the line from Blaenau Ffestiniog to Porthmadog. The work of restoration began on 20 September 1954 when Morris Jones, the foreman fitter who had last worked for the railway in March 1947, rejoined the staff to complete the rebuilding of the locomotive 'Prince' on which he had been engaged when the works closed. He was joined at Boston Lodge works by two volunteers, Bill Harvey and Allan Garraway. 6 November 1954 marked the completion of sixty years service with the FR of Robert Evans (for almost 25 years as Manager) and a special train was run (with difficulty) from Minffordd to Porthmadog to celebrate the occasion and convey Mr Evans, his wife, Alan Pegler (Company Chairman) and guests en route to a clock presentation ceremony. Mr Evans continued in service as Manager until his retirement on 1 June 1955 when Allan Garraway was appointed as Manager.

The first public passenger train from Porthmadog to Boston Lodge ran on 23 July 1955. Prince returned to service on 3 August 1955 and, following extensive boiler repairs, Taliesin, then the latest of the FR Fairlie articulated engines, returned to service on 4 September 1956. The passenger service was extended to Minffordd on 19 May 1956, to Penrhyn on 5 June 1957 and to Tan-y-Bwlch on 5 April 1958. Increasing traffic was putting severe demands on the track - over seven miles had been reopened in four years. A long period of consolidation, rolling stock restoration and track renewal followed before the extension to Dduallt on 6 April 1968. Extension to Dduallt was celebrated on 28 May 1968 by the re-introduction of the Ffestiniog Railway Letter Service.

The Festiniog Railway Company was able to obtain compensation in 1972 for the disruption caused by the construction of the pumped storage schemes. This involved the second-longest legal battle in British legal history, which took eighteen years and two months. Two years later, as a result of the case, the British Parliament passed the Land Occupancy Act 1973.