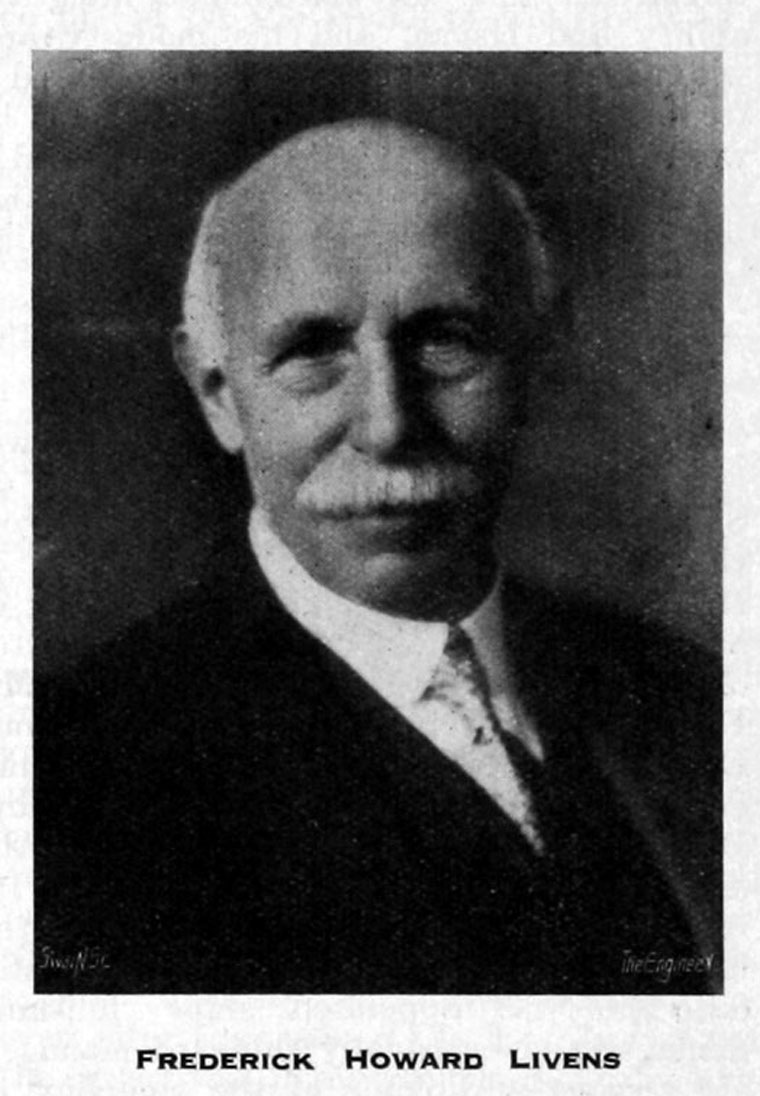 Frederick Howard Livens (1854-1948) Chief Engineer and Director of Ruston and Hornsby. Worked for the company for fifty-four years.

1926 Director and Chief Engineer of Ruston and Hornsby - he had completed fifty years' service with that company in March 1926.[1]

"FREDERICK HOWARD LIVENS was an engineer of the older generation, but widespread regret will be felt by engineers in general at the news of his death, following a short illness, which occurred at St. Andrew's Hall, Droitwich , on Saturday, October 30th, in his ninety-fifth year. He was chief engineer of Ruston, Proctor and Co., Ltd., and latterly of Ruston Hornsby, Ltd., of Lincoln.

He was born in 1854 and entered the engineering industry of Lincolnshire in 1869, when he was articled to Marshall, Sons and Co., Ltd., of Gainsborough. In the next six years he went through the shops and spent a year in the drawing-office, and in the same period he furthered his scientific knowledge at a private school in Leicester. During his pupilage at Ma.rshall's he took a Whitworth Scholarship, one of the youngest competitors of the year, but as the rule for holding the scholarship then involved a. yearly competitive examination in all subjects, including shop work, in order to apportion the extra emoluments given, he resigned the scholarship in 1875 and spent a further year in the drawing-office at Marshall's....Read more "

"FREDERICK HOWARD LIVENS, Wh.Sc., whose death occurred at Droitwich on 30th October 1948, at the great age of ninety four, was associated with the firm of Messrs. Ruston and Hornsby, Ltd., of Lincoln, for fifty-five years.

He was articled to Messrs. Marshall, Sons and Company, Ltd., of Gainsborough, in 1869 and, during his pupilage, gained a Whitworth Scholarship. After completing his training he spent a year in the firm's drawing office but left them in 1876 to begin his long connection with Messrs. Ruston Proctor and Company, and their successors, Messrs. Ruston and Hornsby, with the post of chief draughtsman.

He became chief engineer in 1897, a director in 1899, and vice-chairman in 1929, retaining this last position until his retirement in 1931. During this long period he was concerned with the design and construction of a great variety of plant, though chiefly with steam and oil engines, pumping plant, and excavating machinery.

During the war of 1914-18 he was responsible with his son, Captain Livens, D.S.O., for the invention and development of a flame thrower. His long association with the Institution dated back to 1890 when he was elected a Member. He became a Member of Council in 1921 and, after rendering valuable services on various Institution Committees, he was elected a Vice-President in 1929, in which office he continued to serve until 1936. He was elected an Honorary Life Member a year later. He was the author of a paper on "Lincoln shire Oil-engines (1920); and of another written in collaboration with Mr. W. Barnes on "Recent Excavator Practice" which was presented in the same year. He was also a Member of the Institution of Civil Engineers and an honorary member of the Junior Institution of Engineers. Mr. Livens took a keen interest in local affairs, being Sheriff of Lincoln in 1901 and chairman of the Education, Drainage and other municipal committees. He was also a Justice of the Peace and served as chairman of the governors of the Lincoln Municipal Technical School from 1912 to 1931."