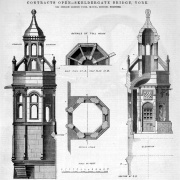 GEORGE GORDON PAGE, son of Thomas Page, M.Inst. C.E., was born in London in the year 1836, when his father was the Acting Engineer of the Thames Tunnel.

He was educated chiefly at King’s College School, London, and entered his father’s office when the Chelsea and the Westminster Bridges were in course of construction. At that time he took the lead in two or three railway surveys, but soon acquired a private practice of his own, and was entrusted with the widening and improvement of several bridges of minor importance.

In 1867 he designed and superintended the construction of a new bridge at Myton over the Swale, in Yorkshire, and later one over the Tyne at Haltwhistle, in Northumberland, both on his favourite principle, namely, the iron arch of wide span.

He was subsequently appointed Engineer to the Margate Pier and Harbour Company, a position gained by competition. After some years of delay, and frequent modification of designs, he commenced, in 1875, the new pier-head, which, with its promenade and other accessories, was completed about the year 1878. It covers a large area of sca, and is probably the most popular resort of the kind, as well as the most profitable to its proprietors. He also rebuilt the landward end of the jetty after its destruction by a storm.

During his career, Mr. Page initiated and planned many schemes for sea-board jetties, designed to afford berths for vessels in any state of the wind or tide. In 1873, and subsequent years, he made the surveys and directed the construction of the Ravenglass and Eskdale Railway, in Cumberland, a 3-feet gauge mountain line.

From 1877 to 1881 he was engaged upon the Skeldergate bridge, over the River Ouse, in the City of York, and the several approaches thereto. This bridge is of iron arches, springing from massive stone abutments and piers; a portion of it on the bascule principle, to accommodate navigation, is made to open by means of hydraulic machinery. The introduction of this mechanism into an ornamental bridge entailed engineering difficulties which were skilfully dealt with. The bridge and its accessories were designed in early fifteenth century Gothic, and the greatest care was bestowed upon every detail. Mr. Page was an excellent draughtsman and colourist, and has left behind many drawings to testify to his skill.

During the last year of his life he was a confirmed invalid; the consumptive maladies, which ended fatally on the 13th of July 1885, kept him wholly confined to the house in the previous winter. He was elected an Associate of the Institution on the 7th of February, 1865, and was transferred to the class of Members on the 15th of January, 1878.