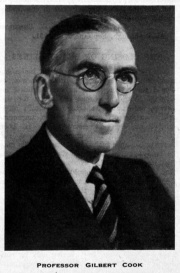 "...Gilbert Cook was born at Blackburn, Lancashire, on October 26th, 1885. He received his general education at the Public Higher Grade School, Blackburn, and at Roomfield Secondary School, Todmorden, and then studied at Manchester University, where he graduated..." [more]

"Professor GILBERT COOK. D.Sc., F.R.S., Regius Professor of Civil Engineering and Mechanics in the University of Glasgow, died on Tuesday, 28th August 1951. He was born in Todmorden in 1885 and received his early education at Roomfield School, Todmorden, passing to Manchester University, where he graduated with first-class honours in engineering in 1905. He then served a three-year pupilage under Mr. D. C. Rattray, M.Inst.C.E., at that time chief engineer of the Lancashire and Yorkshire Railway, in whose service he continued for another year as assistant engineer.

In 1910 he was elected Vulcan Research Fellow by the University of Manchester, where he carried out an investigation of the strength of thick hollow cylinders. A report on this research was his first contribution to the British Association for the Advancement of Science, delivered in 1910 at the annual meeting held in Sheffield. Following this he received an appointment as lecturer in engineering at Manchester University, where he remained, and continued his researches, until the outbreak of war in 1914, when he was granted a commission in the Royal Garrison Artillery. In 1917 he was transferred to the Royal Naval Volunteer Reserve and was posted to the technical branch of the mining, mine-sweeping, and anti-submarine service at Portsmouth. After demobilization he spent some two years as senior lecturer in engineering at Manchester University and in 1921 was elected to the Chair of Mechanical Engineering in the University of London, tenable at King's College, where he remained until called to Glasgow in 1936. Professor Cook's research work covered a wide field and the results were published in a large number of contributions to technical journals throughout his career, and embodied in addresses delivered before various societies, but he will be remembered chiefly for his work on the stresses and strains of metals in thick cylinders. His status in this, his chosen field of work, was recognized by his election in 1940 as a Fellow of The Royal Society, and in 1949 by his election as President of the Institution of Engineers and Shipbuilders in Scotland.

Professor Cook was elected an Associate Member of the Institution in 1918 and transferred to Membership four years later. From 1940 to 1942 he served on the Committee of the Scottish Branch. He frequently took part in discussions at meetings and was the author of a paper on "Stresses in Thick-walled Cylinders of Mild Steel Over-strained by Internal Pressure", which he presented in 1934. He was also a Member of the Institution of Civil Engineers and served on the Council of that Institution from 1940 to 1943."