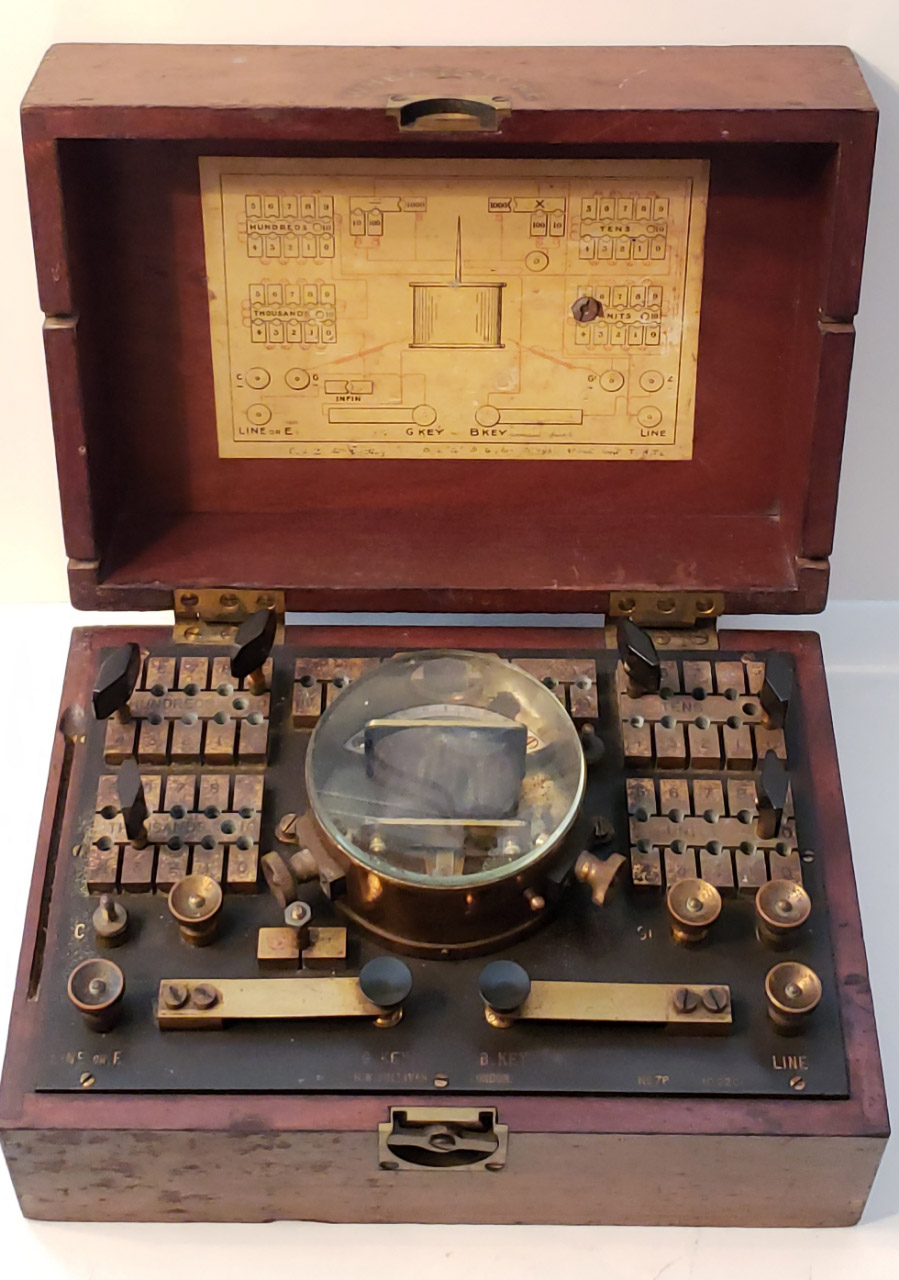 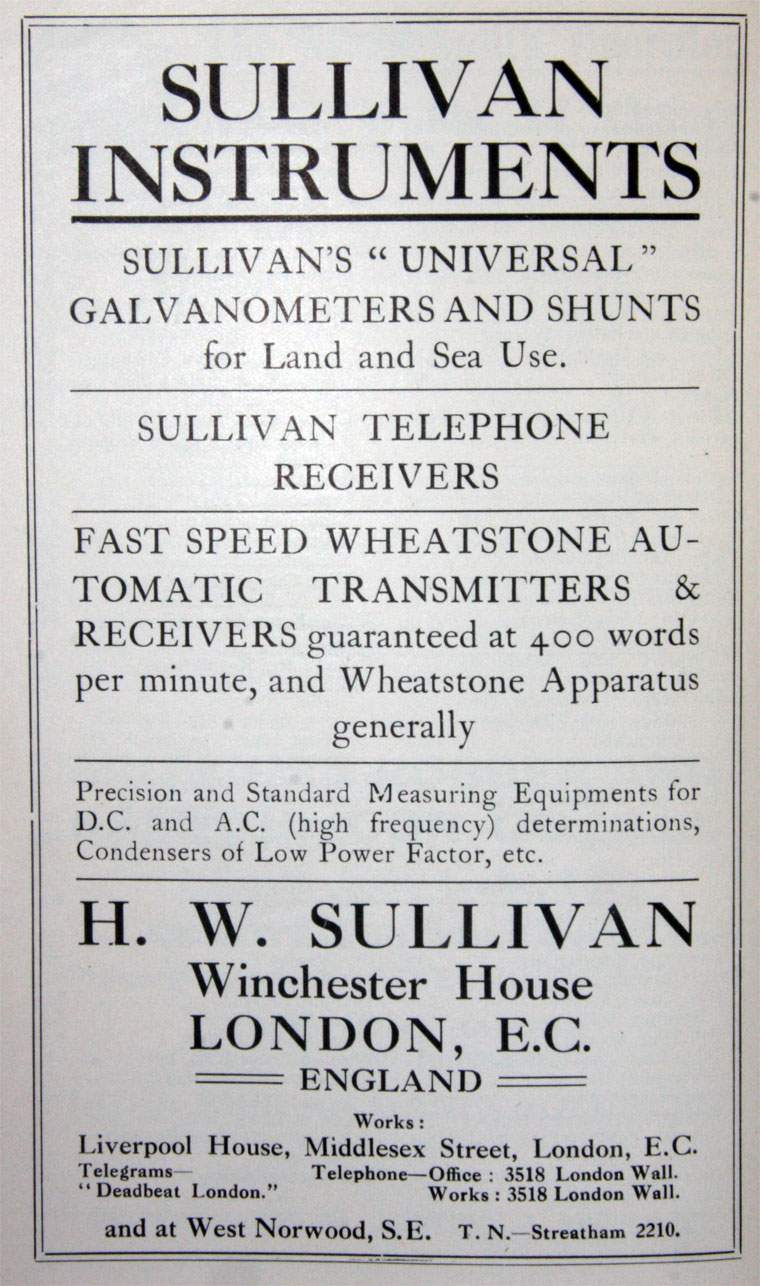 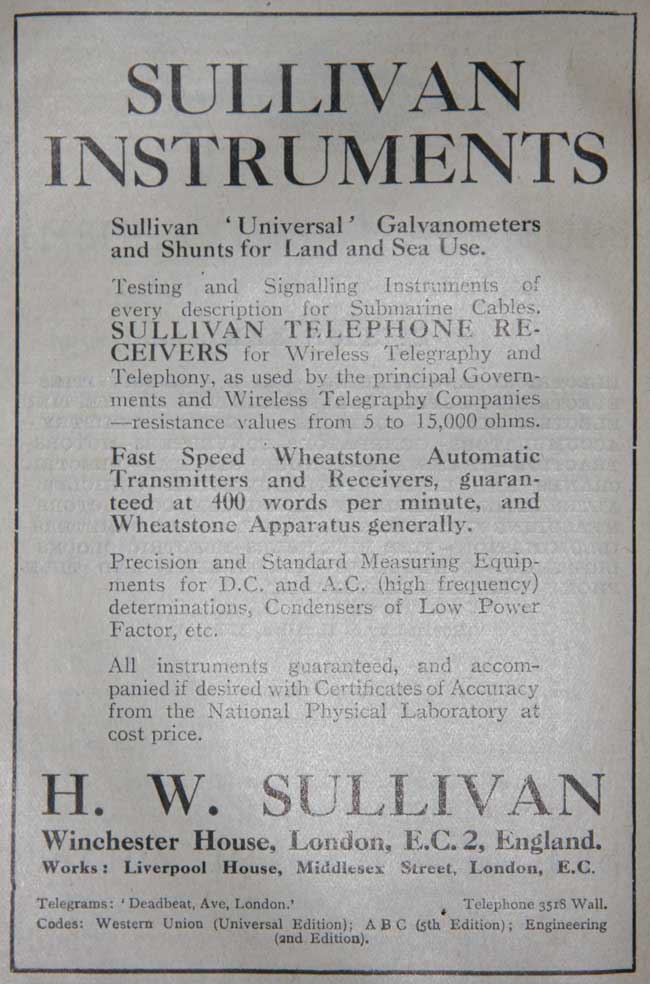 c 1950s Collection of Instruments by the company. 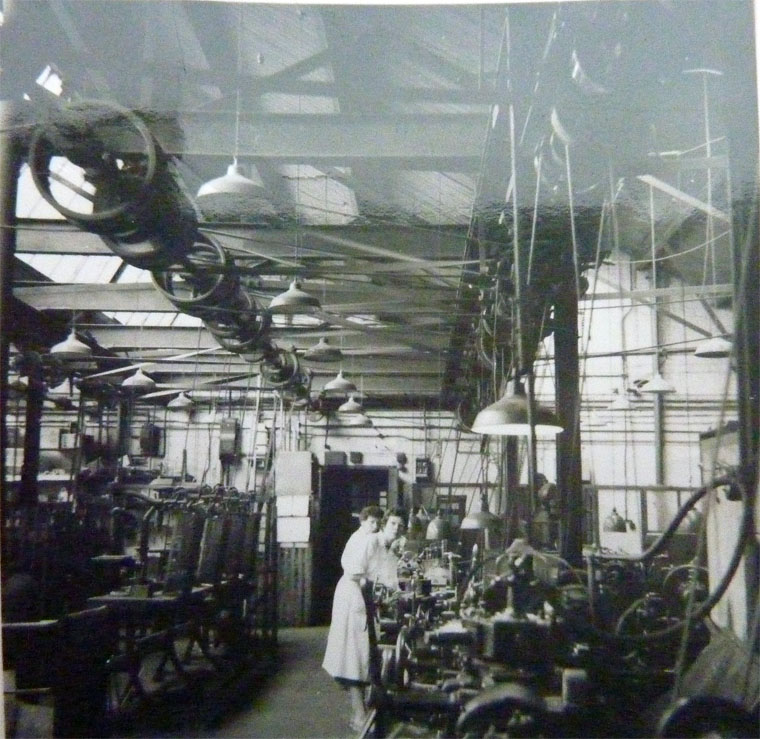 Milliammeter with a sensitivity of 0.3 milliamp full-scale. 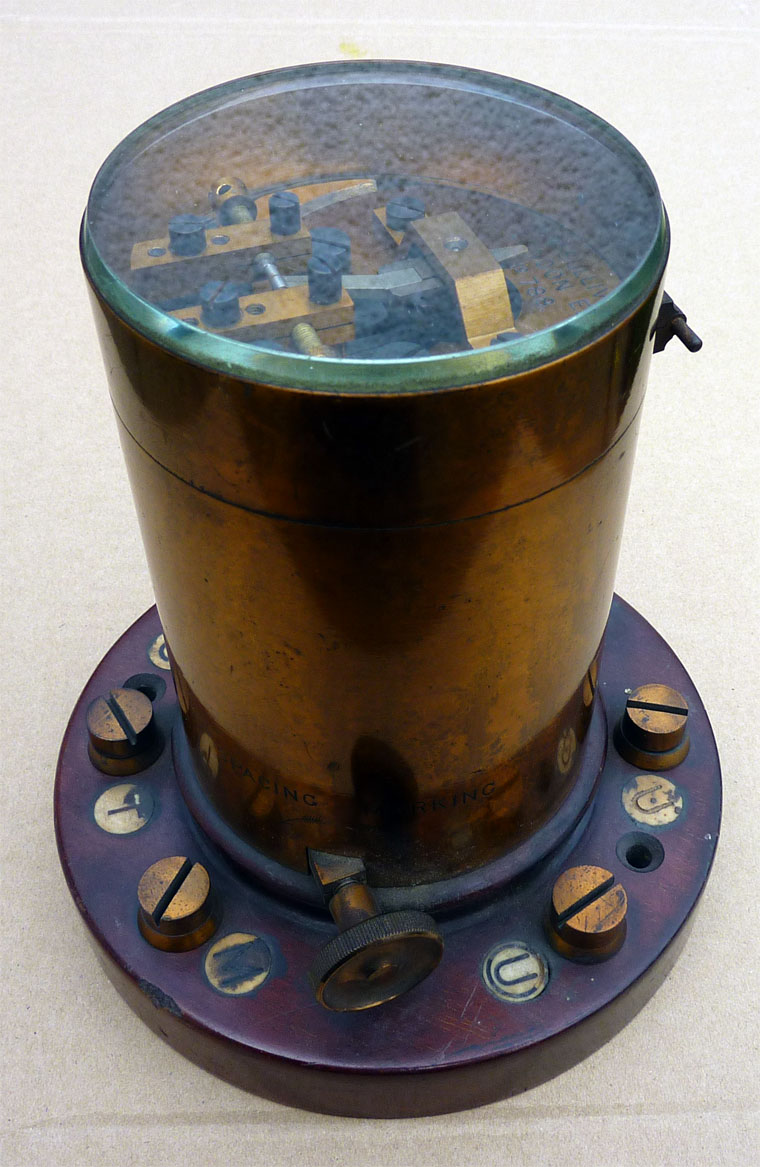 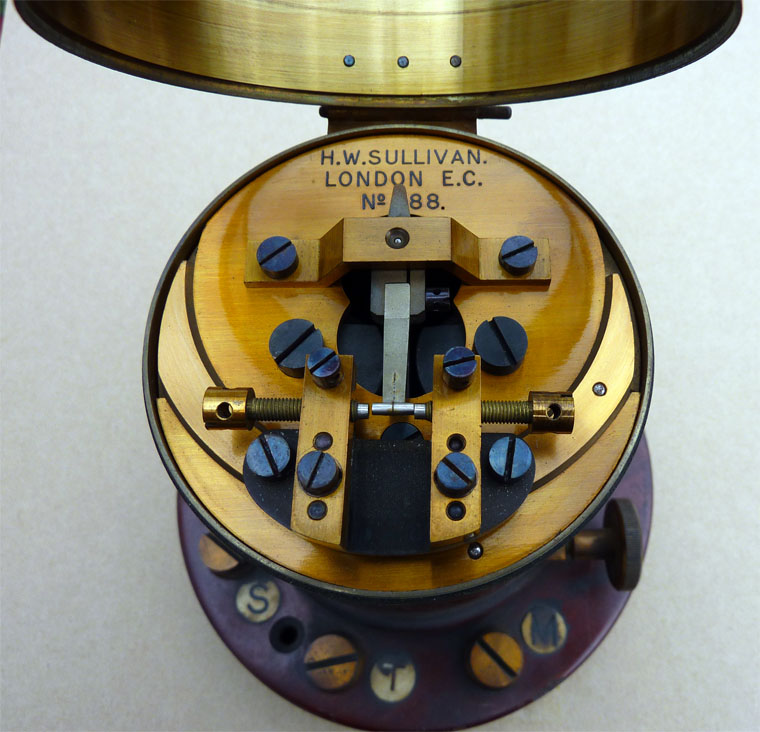 1901 One of 3 suppliers to the Admiralty of an order for wireless telegraphy equipment, totaling 54 sets[1]

1969 The Cambridge Instrument Company was sold to George Kent

1971 Much of the Evershed and Vignoles subsidiary of George Kent was acquired by Avo (part of Thorn Electrical Industries). Presumably Sullivans was part of this deal. Avo then wound up the St Mary Cray site and consolidated operations at Dover.

An account from an ex-employee during the 1950s-60s by Stewart Hawkins.

1962 HW Sullivan then was a firm of about 200 people, and with a few exceptions, most of them knew each other by their first names. The exceptions were when addressing the chief engineer Mr Griffiths, or the directors' family members. Also, younger employees would call their foreman and older engineers, Mr <Surname>

The Company manufactured high precision electrical standards of inductance, capacitance and resistance, and instruments called a 'bridge' for accurately measuring these three components.

Sullivan's did virtually everything in-house, carpenters would make beautiful teak boxes to house instruments, a French polisher would add his finish, metal workers would cut and machine parts from steel, aluminium, copper, brass, phosphor bronze. The boxes for most large instruments would have an inner liner of copper to act as an electrical screen, and these would fit so perfectly, they often slid slowly down into the box under their own weight, pushing the air out as they went.

In-house trades included, carpentry, french-polishing, electro-plating, paint spraying, engraving, coil winding, and calibration of L,C and R standards. Resistance coils of manganin wire were wound onto copper, glass, ceramic, tufnol, (layers of silk lacquered and baked) formers. Air cored inductance coils were wound onto keramot (an early plastic) formers. Vanes for variable air capacitors were made by machining plates from sheets of aluminium, accurately cut with a router, and polished by hand. Spindles were made from gun-metal, top panels from either Keramot, (another early plastic) or aluminium which again were machined in-house.

Sullivans made a particular type of capacitance bridge whose central feature was an infinitely variable capacitor with a tapered main bearing lubricated with a fatty substance made to a secret recipe. It was said by one user that this bearing was so smooth in operation, it gave the impression that it would very slowly move if a fly were to lean against it.

Instrument top panels would all be made from the raw material either Keramot or aluminium, then either polished and treated to seal the surface, or paint sprayed.

Dials of polished bakelite, (another plastic), would be engraved and fitted with crome plated, instrument-head screws. (Instrument head screws are like a woodscrew head with a 45o taper, but a slightly domed top and have a machined thread, in Sullivan's case always a BA thread).

One of my first tasks as a new employee and as a possible new instrument mechanic, was to make a set of screwdrivers for these screws. No matter how many times an instrument would be screwed into or out of its case, the fixing screws of chrome plated brass, would always look brand-new, so the screwdriver tips were ground to fit the slot perfectly.

Terminals were turned from polished and gold lacquered brass. Some instruments used 'plug-blocks' to select a resistance value. These were made from polished and gold-lacquered brass, fitted close together with a tapered 'half-hole' and connected by a tapered brass plug with a diamond shaped top of polished keramot. To fit, a slight twisting motion would be used to ensure a good electrical connection. These plugs would be lapped into their associated blocks and the keramot tops engraved with the serial number of the instrument. This was to keep sets of plugs and blocks together to ensure a good, low resistance fit.

When I first joined the company, one of the engineers told me that it was Sullivans that made the instrument, (a valve maintained tuning-fork), that generated the 1000Hz sine-wave used by the BBC as the Greenwich time signal. What we hear as the Greenwich 'pips' is a 1000Hz tone generated by an oscillator and chopped up into short segments. Although this could be true, I doubt that a Sullivan instrument is used today.

I started as a capstan lathe operator and made parts from mild and stainless steel, gun-metal, copper, brass, plastics such as bakelite, tufnol, keramot and ebonite.

Then I moved into the 'Switch shop', making and assembling parts for the 'first grade' switches used in various instruments. These used fixed contacts of sprung 'brushes' made of leaves of berylium copper and phosphor-bronze, and moving contacts of silver and brass. The idea being to produce a switch with very low and repeatable contact resistance. From there I moved into the engraving department using a Taylor-Hobson machine to engrave various instrument main panels and dials. (Every Sullivan instrument during this period, had, as part of the wording on its main panel, a serial number, the first two digits of which denoted the year of manufacture. During my time engraving, my serial numbers started with either 66 or 67.)

Then I entered the 'resistance' lab to work on assembling resistance substitution boxes.

Late 1960's - It was during my time in this lab that Sullivans fell on hard times, and a new designer/chief engineer was employed. This man invented several new instruments, an auto ranging/auto balancing LCR bridge, a new inductance bridge, an adjustable ratio transformer, a DC detector, an AC detector.

Sullivans were then taken over by The Cambridge Instrument Co and production of some of their instruments transferred to St Mary Cray.

I then joined with two other colleagues and we became a new 'repair' department, repairing and re-calibrating Sullivan and Cambridge instruments.

Then we were sold to George Kent, who in turn sold us to Avo who wound up the St Mary Cray site. Anyone who did not want to move to the Avo site at Dover was offered redundancy, me included, so I left HW Sullivan in September 1972.