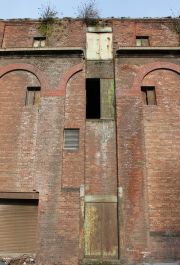 Detail of the former North Works

of 21 Water Street, Liverpool and Birkenhead.

1873 Partnership change. '... the Partnership heretofore subsisting between us the undersigned, at Liverpool, in the county of Lancaster, as Shipbuilders, Boiler Makers, &c., under the style or firm of C. and H. Grayson and Co., was this day dissolved by mutual consent, the undersigned Charles Grayson the elder retiring from the said business, which will in future be carried on by the undersigned, Henry Holdrege Grayson and Charles Grayson the younger, under the style or firm of H. and C. Grayson...'[1]

1889 Contractors for breaking up the SS Great Eastern

1911 Built the salvage tug 'Poderoso' at the Garston Yard for the Pacific Steam Navigation Co., Liverpool. Engine by Crabtree & Co. In 1995 it was acquired by the Museum Poderoso, Talcahuano, Chile. It was damaged, probably terminally, by the Chilean tsunami of 2010.[2]

1912 The company occupied the following sites:-

The above sites were illustrated and described in a 1912 article in the Liverpool Journal of Commerce[3].

Snippets from the 1912 article in the Liverpool Journal of Commerce[4].

'... A great feature in the arrangement of the machines on this ground floor is the amount of space available in the vicinity of the boring, slotting, and such like machines, whereby the large pieces of marine machinery and ship construction which prevail in the present-day vessels can be easily handled. .... The building, being of modern construction, the window area is of such an extent as to afford ample daylight to all parts of the shop, whilst at night the whole of the avenues are well lit by adjustable electric lamps. The floors are well laid with wood and sets, which ensures the absence of dust, the element heretofore so common and detrimental to shops of this kind. ..... The lathes are all triple or quadruple geared, and vary in sizes from 60ft. long by 6ft 6in. centres, with a diameter in way of gap of 17ft., down to smaller lathes 12ft. by 12in. centres. ....'

The works also included a pattern shop, and at the eastern end was a boiler shop served by a 40-ton and smaller cranes, large plate-bending rolls, punching and shearing machines, plate edge planing and scarfing machines. In the northern block was the forge and smithy, with Pilkington power hammers and a chain testing machine, coppersmiths and sheet metal department, pipework, and tinsmiths. 'This department has of late been working at very high pressure in the making of lifeboat and raft tanks, the demand for which has been so great.' The article was published in November 1912, seven months after the loss of RMS Titanic.

North Works was located on Regent Road in Bootle, across the road from the docks, and bounded on the south side by Brunswick Place. The building has been extensively altered, and is largely derelict. At some point the building facing Brunswick Place was evidently converted to a warehouse. The photos above show that the large windows have been bricked up, and openings introduced for hoisting goods in and out. The cast iron cills bear the name of the Sandon Motor and Engineering Co.

The premises were used for about 30 years, until 1984, by Merseyside Food Products Ltd, whose name still appears (2022) on the Regent Road frontage. Near the southern corner of this frontage is a bricked-up arched doorway, above which the ghostly words 'Engine Works' can just be seen.