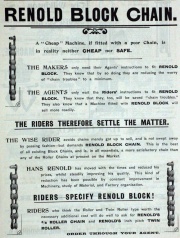 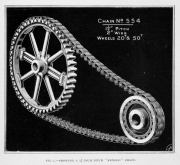 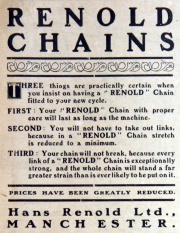 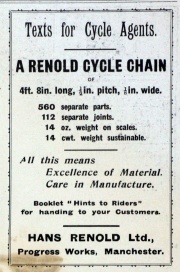 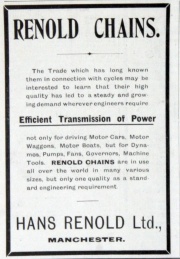 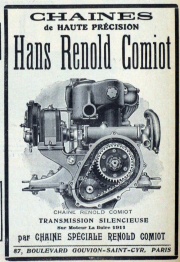 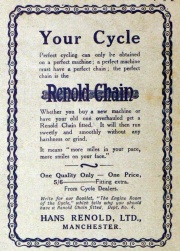 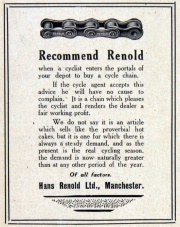 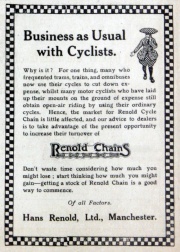 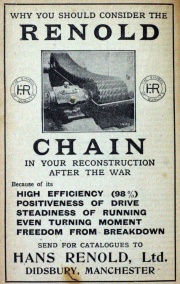 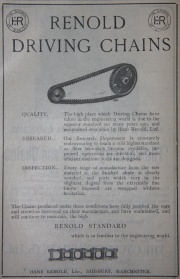 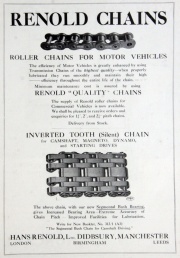 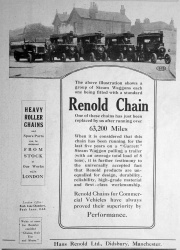 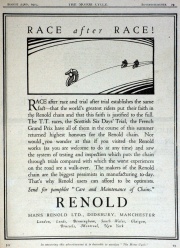 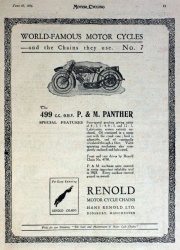 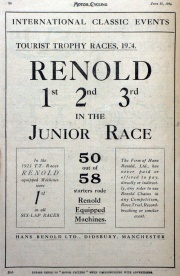 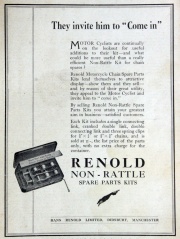 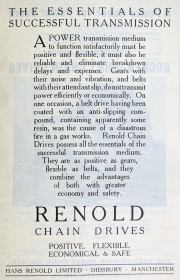 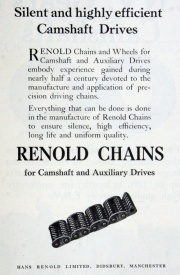 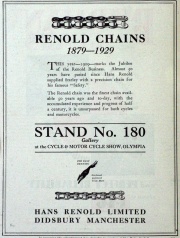 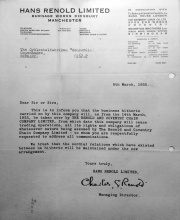 1879 Company founded by Hans Renold. He purchased James Slater's business, a small textile-chain making business in Salford. In December he supplied a chain to James Starley.

1881 Mr. Hans Renold, patent chain maker, mentioned as having three rooms (one with power) at Medlock Sawmills, Chorlton-on-Medlock, and a tenancy of two more years.[1]

1881 He moved from Salford to Brook Street, Manchester, where a new factory, Progress Works, was subsequently built.

1885 A patent for the block chain was applied for by Hans Renold but he decided to openly give his idea to the cycle trade for all to freely manufacture.

1888 The Hans Renold company were riveting the bearing pins in the assembled chain.

Designed and manufactured a machine for the Dry Tumbling (Jingling) of chain components.

1895 Designed and manufactured a machine for producing the Rotary Rivet on the ends of the chain bearing pins. The need for an Inverted tooth (silent chain) was apparent to Hans Renold and this resulted in his patent of 1895. Although his design of chain was superseded in later years by the silent chain with rocker joints, he made an impact in the introduction of such a chain. Designed and manufactured a machine for the Wet Tumbling (Jingling) of chain components

1896 Hans Renold company designed and manufactured a machine for the proof loading of their chain.

Introduced the 48-hour week when the general practice in engineering was 52 or more.

1899 The Hans Renold company introduced their patented feature of the end recess in the bearing pin. Introduced the round-ended necked (i.e. shouldered) bearing pin in their 1899 patent.

1899 Sought the winding up of the Ribblesdale Cycle Co.[3]

1900 The Hans Renold company designed and manufactured a Coning Machine.

In the early 1900s the Hans Renold company introduced an apprenticeship scheme.

Hans Renold Ltd designed and manufactured a Semi-Automatic Drifting Machine for use on assembled inner links.

1906 Renolds began supplying mortise block chains (and associated equipment) which were a notable part of the business for about 60 years. During the construction of a new factory, rather than use belt drives from overhead line-shafts Renold designed, and installed, overhead chain drives. Began designing and manufacturing special - purpose machines for the assembly of chains. Began the manufacture of chain wheels. Developed a machine for centreless grinding of bearing pins. This was long before centreless grinders became the factor in machine shop practice that they are now.

1910 Hans Renold Ltd designed and manufactured a Tumbler (Jingler) for the blueing of chain plates. The blue plates being a feature of the Hans Renold chain for many years.

1912 The company began the process of end softening of bearing pins and only now are many of Renold's competitors beginning to incorporate this feature. Supplied the chain for Big Ben.

1913 Hans Renold launched his improved sprocket tooth profile which, with slight modification, was adopted by the United States as their Standard profile. Designed and manufactured a Fatigue Test Machine for the evaluation of chain fatigue strength.

1914 Designed and patented their flexible chain coupling. A product that is still used today, worldwide.

c1915 Hans Renold Ltd were manufacturing high waisted chain plates and were also manufacturing chains with straight sided plates. Designed and manufactured Running-in machine for their chain. Introduced Stock Drives, something of which is taken for granted today.

By 1915 the company had completed the construction of, and transferred to the Renold Works in Burnage, Manchester. The first of many branch sales offices were opened in London and Glasgow, in 1910 and 1912, respectively.

1918 Manufactured extra strong chains for use on motorcycles.

1920 A selling subsidiary was established in Canada in 1920, and a less successful sales organisation in America, in 1921. The same period saw the formation of Renold Chains Ltd., to handle export sales other than those to Canada and the U.S.A. (mainly with French and Belgian markets in mind).

1925 The first acquisition of a major competitor came, when Brampton Brothers with its French manufacturing subsidiary at Calais, was purchased and the operation merged with the manufacturing facility previously established in Coventry.

Hans Renold were approved under the A.I.D. regulations to issue Inspection Certificates and were likewise an approved A.R.B inspection authority.