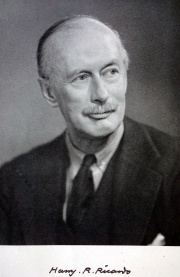 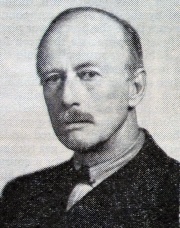 Sir Harry Ralph Ricardo (1885-1974) was one of the foremost engine designers and researchers in the early years of the development of the internal combustion engine.

He patented the two-stroke engine design, personally developed the engines that would be used in the first tanks, oversaw the research into the physics of internal combustion that led to the use of octane ratings, was instrumental in development of the sleeve valve engine design, and invented the Diesel pre-combustion chamber that made high-speed diesel engines practicable.

1885 Harry Ricardo was born in London in 1885, descended from a brother of the famous political economist David Ricardo. He had 2 sisters, both younger than him.

He was from a wealthy family and educated at Rugby School. He was one of the first people in England to see an automobile when his grandfather purchased one.

1903 He joined Trinity College, Cambridge as a civil engineering student.

1904 At the end of his first year, he decided to enter the University Automobile Club's event, which was a competition to design a machine that could travel the furthest on a quart of petrol. His engine was the heaviest entered, but his motorcycle design nevertheless won the competition. He was then convinced to join the Professor of Mechanism and Applied Mechanics, Bertram Hopkinson, graduating with a degree in 1906.

Upon graduation Ricardo set up his own company, the Two-Stroke Engine Co, in order to sell a small engine and car he called the Dolphin. Although they had some sales, notably for fishing boats, the company nevertheless failed in 1911.

1915 He set up a new company, Engine Patents, which developed the engine that would eventually be used in the first successful tank design, the British Mark V. A total of over 8,000 of his tank engines were put into military service, making it the first British-designed engine to be produced in large numbers. The Mark IX tank and the British version of the Mark VIII (tank) also used a Ricardo engine.

1917 Bertram Hopkinson invited him to join the new engine research facility at the Department of Military Aeronautics, later to become the RAE.

1918 Hopkinson was killed while flying a Bristol Fighter and Ricardo took over his position. From that point on the department produced a string of experimental engines and research reports that constantly drove technical developments in the British and worldwide internal combustion engine industry.

One of his first major research projects was on the problems of pre-ignition, known as knocking or pinking. To study the problem he built a unique variable-compression test engine. This led to the development of the octane rating system, and considerable investment into octane improving additives and refining systems. The dramatic reduction in fuel use as a result of higher octane fuel was directly responsible for allowing Alcock and Brown to fly the Atlantic in their Rolls-Royce-engined Vickers Vimy bomber, adapted with his modifications.

1927 he formed Ricardo Consulting Engineers in Shoreham-by-Sea, which has become one of the foremost automotive consulting firms worldwide and is publicly listed.

Ricardo's work exerted influence all around the world. While his work guaranteed Britain a supply of fuels of ever-increasing power during the 1930s, it also enabled Germany to produce synthetic high-octane aviation fuel, for example for the Focke-Wulf FW 190 which inflicted heavy losses among the RAF's planes in 1942. Likewise, Ricardo's research on the detonation-inhibiting qualities of alcohol-water injection was exploited by German engineers to provide their aero-engines with a particularly powerful special emergency power rating.

Another late 20s-early 30s development was a new type of combustion chamber for diesel engines that allowed them to be run at high speed. The resulting design, known as the Comet, would go on to be used in a number of boats, trains and trucks.

Another major development effort was research into rotating-sleeve valve engines, which were widely used in the British aero-engine industry during the war. By the end of the war the Napier Sabre, based on his work, was the most powerful piston IC engine in the world at over 3,500 hp (2,600 kW). He was also instrumental in Napier's decision to build a diesel-compound engine with extremely good fuel economy, the Napier Nomad, although it was not a commercial success. Bristol Engine Co and Rolls-Royce also developed powerful sleeve valve engines; the latter's Rolls-Royce Crecy remained the most powerful engine of its size for many years after the war, at over 200 bhp/litre (150 kW/L). Ricardo even enhanced the famous Merlin engine; the Merlin in the Mosquito received an oxygen enrichment system to improve its performance.

During the 1960s a second round of development of the Comet system was started, now armed with considerably more powerful test apparatus. The refined design was immediately used in several cars, and the pre-combustion system remains in use in most diesel engines today. Ricardo Consulting remains committed to the diesel, considering it to be nowhere near its development potential even in the most advanced of today's engines.

1978 the US Department of Energy hired Ricardo Consulting to research the Stirling engine as a car engine. A series of engines, eventually forty-five in total, were built to test this system and showed very low emissions, but the efficiency was compromised by the need to operate under transient conditions -- the design was best running at a single speed, making it less than useful as a car engine. The Stirling may make an excellent engine for hybrid cars and has recently generated some interest in this role.

1986, the Voyager was the first aircraft to fly around the world non-stop and without refuelling. Ricardo Consulting redesigned the otherwise "stock" Teledyne Continental engine to incorporate a highly efficient combustion system and water cooling, thereby dramatically reducing drag and improving fuel economy.

Ricardo had worked on direct injection petrol (gasoline) engines for aircraft engines from the 1930s; but work on diesels finally started to come to fruition in the 1990s. Today several stratified charge engines are in use in the automotive market, designs that would not have existed without his constant work on them.

Dr. RICARDO was educated at Rottingdean Preparatory School, and Rugby School, and while at the latter school spent much of his spare time in the engine works of Willans and Robinson (now the English Electric Company).

From 1916 he practised as an independent consulting engineer, and in 1918 formed a private company with, in 1919, an experimental laboratory.

He was appointed technical director of Ricardo and Company, Engineers (1927), Ltd., and later chairman, continuing his research and development of internal combustion engines. He has acted as consulting engineer to the Air Ministry since 1918, and to the Tank Department in 1941, besides being frequently consulted by the Air Ministry.

"'Sir Harry Ricardo, an engineer who was once described as 'the high priest of the internal combustion engine' died on Saturday at the age of 89. From 1919 to 1964 he was chairman and technical director of Ricardo and Co.

A Fellow of the Royal Society and ex-consulting engineer to the Mechanical Warfare Department and the Air Ministry, he became presidential of the Institution of Mechanical Engineers in 1944 and was knighted in 1948."