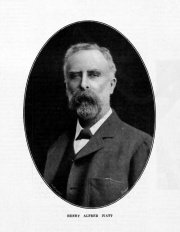 1900. For the Great Northern Railway.

1903. 8 coupled metropolitan engine for the GNR.

Introduced the large engine policy culminating in the Atlantic class and the wide-firebox class.

Patented the water scoop and built up crank-axle.

Oversaw the introduction of 12-wheel bogie carriages with automatic couplings.

Aged 17, H. A. Ivatt was apprenticed to John Ramsbottom at the Crewe Works of the London and North Western Railway (LNWR). He worked as a fireman for six months and held various positions there.

He was made head of the Holyhead Locomotive Depot in 1874, before being promoted to the head of the Chester District.

In 1877 H. A. Ivatt moved to Ireland, and the Great Southern and Western Railway at Inchicore.

In 1882 he was appointed to the post of locomotive engineer there, where he patented a design for a sprung flap for vertically-opening carriage windows that became ubiquitous.

In 1895 Ivatt returned to England and was appointed Locomotive Superintendent of the Great Northern Railway (GNR) in succession to Patrick Stirling.

At the GNR, he became associated with 4-4-2 (Atlantic) type, which he introduced to Britain. Ivatt was also the first to introduce Walschaerts valve gear to Britain.

H. A. Ivatt retired on 2 December 1911. He was succeeded as Chief Mechanical Engineer (CME) of the GNR by Nigel Gresley.

He had six children, the first of which, Campbell, died in infancy. His son George Ivatt was also a locomotive engineer and post-war CME of the London Midland and Scottish Railway. His daughter Marjorie married Oliver Bulleid, CME of the Southern Railway.

HENRY ALFRED IVATT was born on 16th September 1851, being the eldest son of the late Rev. A. W. Ivatt, Rector of Coveny-cum-Manea, in Cambridgeshire.

As soon as his apprenticeship was over, he became an ordinary fireman on the line, being employed on fast expresses running north and south from Crewe. He next spent six months in the Traffic Department, after which he was made assistant foreman at the steam shed at Stafford.

In 1874 he was put in charge of the locomotive department at Holyhead, and two and a half years later was promoted to the Chester District.

In October 1877 he was appointed District Superintendent of the Southern Division of the Great Southern and Western Railway of Ireland, with headquarters at Cork, and in 1882 he became assistant locomotive engineer and works manager at Inchicore, four years later being made Locomotive Engineer of the line.

In 1895 Mr. Ivatt accepted the position of Chief Locomotive Engineer to the Great Northern Railway, and in March of the following year he went to Doncaster. At this period large increases in traffic were being experienced, and more powerful engines were called for. His first engine differed from the practice of his predecessor — Sir. Patrick Stirling — being a four-coupled engine with a leading bogie, and a steam-dome. He was the first to introduce into this country the "Atlantic" type of engine, which at that time was the largest and heaviest express engine in the kingdom.

In 1901 he introduced a very powerful mineral locomotive which successfully hauled from Peterborough to London a train of fifty-two fully loaded 10-ton coal trucks, which, with a 20-ton brake, represented some 750 tons. This engine had eight-coupled wheels. 4 feet 8 inches diameter, and weighed with tender 95i tons.

Mr. Ivatt believed in having plenty of boiler power on his engines, and was the first to employ the Walschaert valve-gear in this country. He was also among the first to adopt superheating on both passenger and goods engines, and took out several patents in connexion with locomotives.

Mr. Ivatt, who endeared himself with all who served under him, retired in 1911, and was the recipient of his portrait in oils, over 200 persons subscribing for it.

He then went to live at Hayward's Heath, where his death took place on 25th October 1923, at the age of seventy-two.

He became a Member of this Institution in 1887, and was a Member of Council from 1900 to 1922, when he was appointed a Vice-President, which position he resigned in July 1923, owing to ill health.

Mr. Ivatt contributed one Paper to the Proceedings on "Notes on Road Trials of three Express Passenger-Engines, carried out on the Great Northern Railway in 1906."