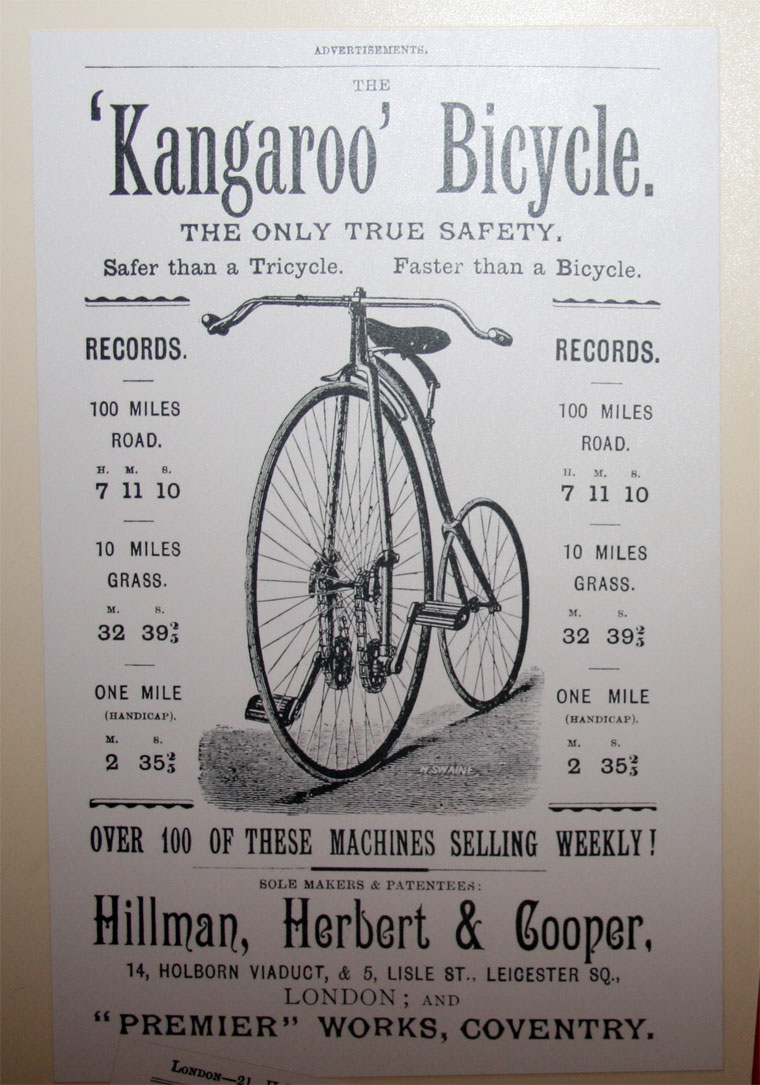 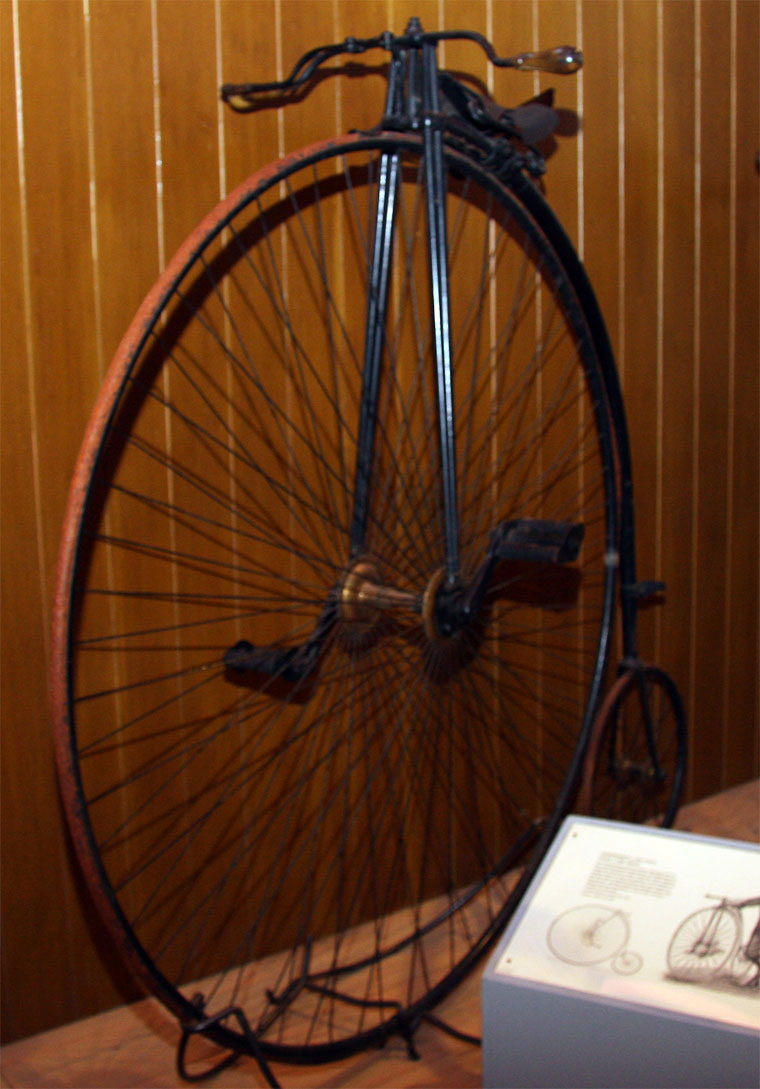 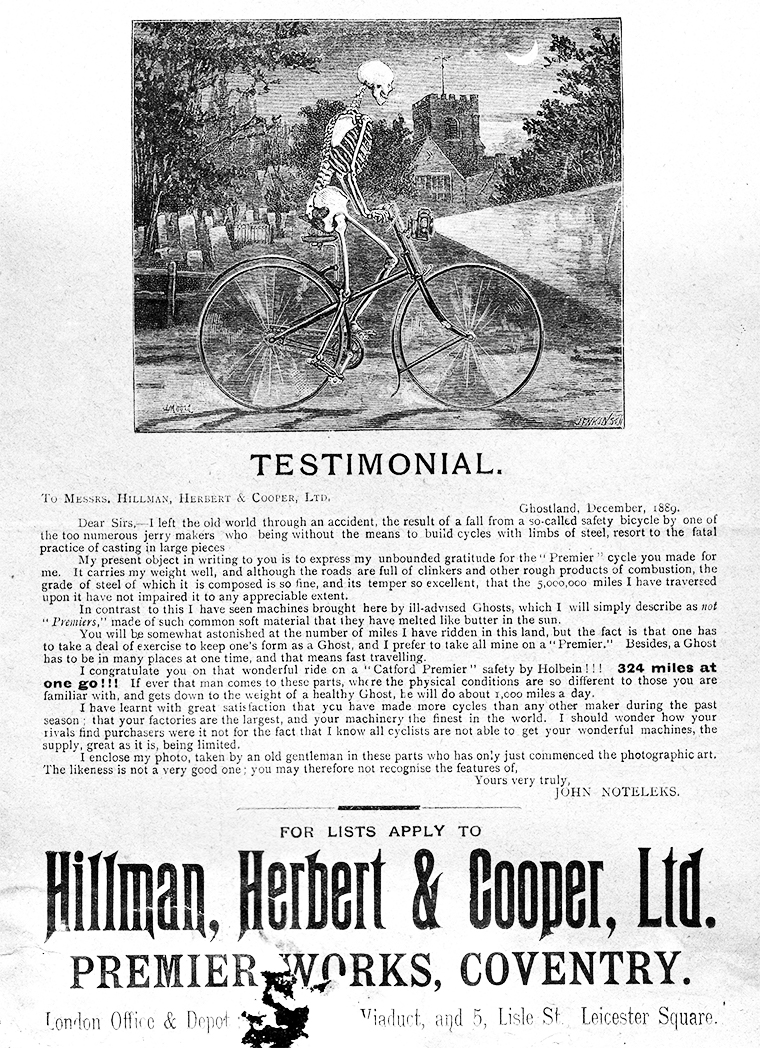 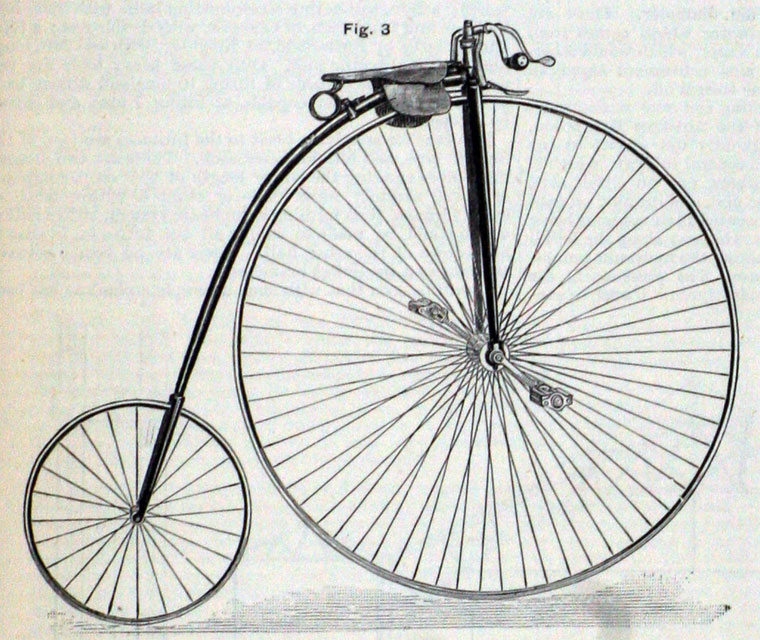 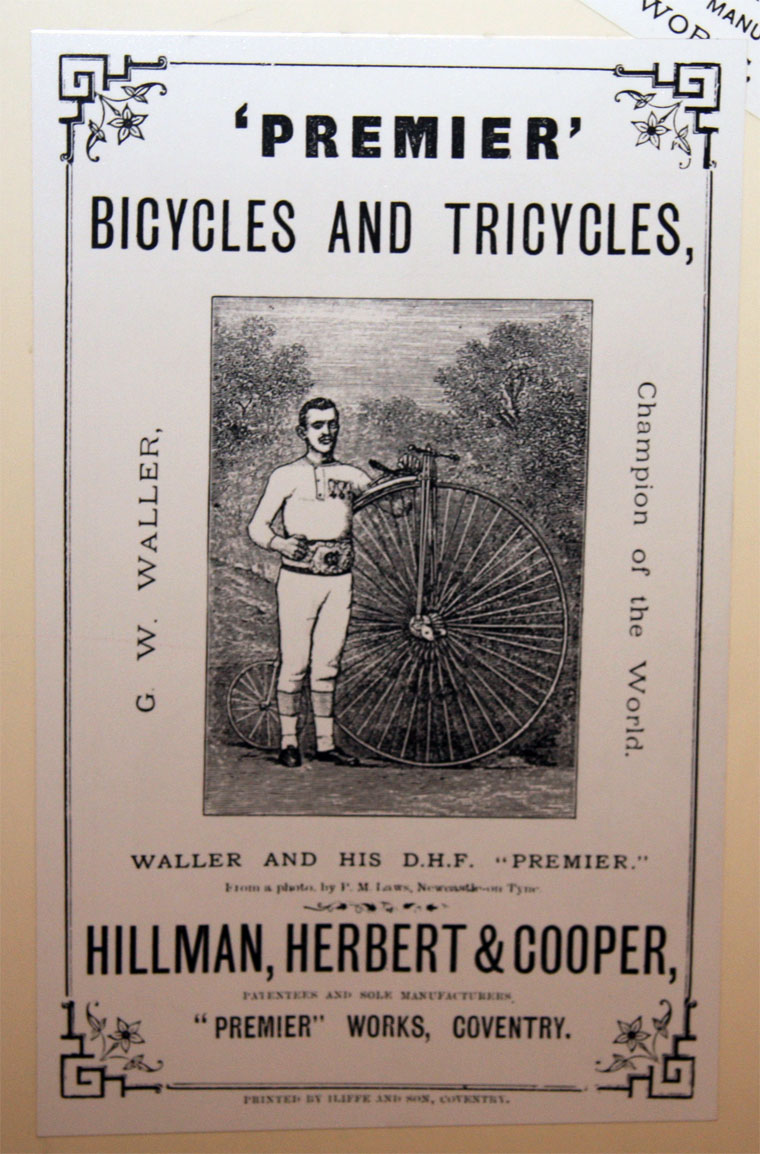 1876 Hillman and Herbert Company established by William Hillman and William Henry Herbert. The company initially made sewing machines (and possibly also roller skates)but soon expanded into making bicycles which quickly dominated the business. Hillman went onto become the world's largest manufacturer of cycles at one time, many under the brand name Premier.

William Henry Herbert (nicknamed "Tubby") was the financial man in the partnership. Hunting was his hobby[1].

1880 The company became Hillman, Herbert and Cooper when they were joined by George Beveley Cooper.

1884 Introduced the Kangaroo Cycle at the Stanley Show, in February 1884; this had a 38 inch front wheel with geared, chain drive and 20 inch back wheel[4]. Despite limited commercial success, the use of a chain drive stimulated other makers to revisit/develop a low mount cycle with chain drive of the rear wheel, producing a "safety" bicycle[5].

1884 Advert featured "Premier" tricycle and "Cruiser" tricycle with chain driven front wheels which claimed the record for 24 hours cycling by W. F. Sutton. The company were makers of "every kind of Bicycle and Tricycle"; Premier Works was the "largest cycle manufactory in the world"[6].

1888 February. Stanley Exhibition of Cycles in Westminster. Cycle with curved front-forks and also a tandem

1888 Advert by Hillman, Herbert and Cooper warning the public against imitations of their Premier cycle[7].

1890 Jan/Feb. The Stanley Exhibition of Cycles at the Crystal Palace. Showed the Premier Rational model based on the front wheel drive 'penny-farthing'. Illustrated

1891 Described as of Premier Works, Coventry; Nuremberg, Bavaria; 14 Holborn Viaduct, London; 5 Lisle Street, Leicester Square, London; and 133 Hammersmith Road, London. The works at Coventry cover three acres and employ 500 people. They were commenced in 1876. In the four years ending September 20th 1890 they have sold 32,301 cycles. The Premier Cycle Co Ltd was formed for the purpose of purchasing Hillman, Herbert and Cooper as a going concern.[8]

In order to advertise this machine, the makers organized a 100 miles scratch road race, confined to riders of the 'Kangaroo,' which took place on 20th September, 1884, the course being from near Twyford to Norman Cross. This was won by George Smith, of the Merry Rovers Club, in 7 hrs. 11 mins. 10 secs., being record for the distance. S. Golder was second in 7 hrs. 47 mins. 5 secs. and T. A. Edge third in 7 hrs. 59 mins. 21 secs.

Hale will be remembered for his feat of riding 100 miles every day — except Sunday — for a year, starting on 31st July, 1899: for this performance he used a French-made "Acatene" bevel geared chainless bicycle with Dunlop wired-on tyres. He also won the first Six Days' bicycle race held on the indoor track at Madison Square Gardens, New York, in December, 1896. A letter from Hale is attached to the 'Kangaroo' in the Bartleet Collection: in this the famous veteran rider said, "This old 'Kangaroo' is very interesting to me, as it was on a similar machine that I won the 100 mile race and beat record in 1885. It is nice to know that a specimen of the obsolete type is being preserved in your Museum for the benefit of posterity."

Note the series of four holes in the "neck," for raising the spring and adjusting the reach to accommodate riders of different height. Also handlebar of tapered tube. It is also of historic interest to recall that Hillman built his first—experimental 'Kangaroo' with a train of three cog-wheels on each side, instead of chains; the middle and lower cog-wheels were adjustable (to take up wear) by sliding their holding clips on the front fork extensions.

Some historians argue that the 'Kangaroo' was anticipated by the 'Hall' front-driving safety bicycle made by Messrs. Coupe, Addy and Hall, Tinsley, Sheffield, and exhibited at the Stanley Show in 1882. A similar machine was built by the Surrey Machinist Co about the same period.

Hillman, Herbert and Cooper were one of the earliest firms in the cycle industry, having started business in 1876. William Hillman was originally a foreman at the Coventry Sewing Machine Co, where he was associated with James Starley, George Singer and other pioneers. He was the practical mechanic of the H.H. and C. trio. Hillman died in 1921.

William Henry Herbert (nicknamed "Tubby") was the financial man. He was a brother of Alfred Herbert, the well-known machine tool maker of Coventry, and came of a Leicester family. Hunting was his hobby.

George Beveley Cooper possessed the commercial brain, and managed the company's London Depot on Holborn Viaduct from the time it was opened till the Company was floated as the Premier Cycle Co, when he left. Later he managed The Boudard Gear Depot on the Viaduct. He died January, 1919, aged 61 years.

Taylor, Cooper and Bednell were all employed by H.H. and C. and left to start the Raglan Co. [9]