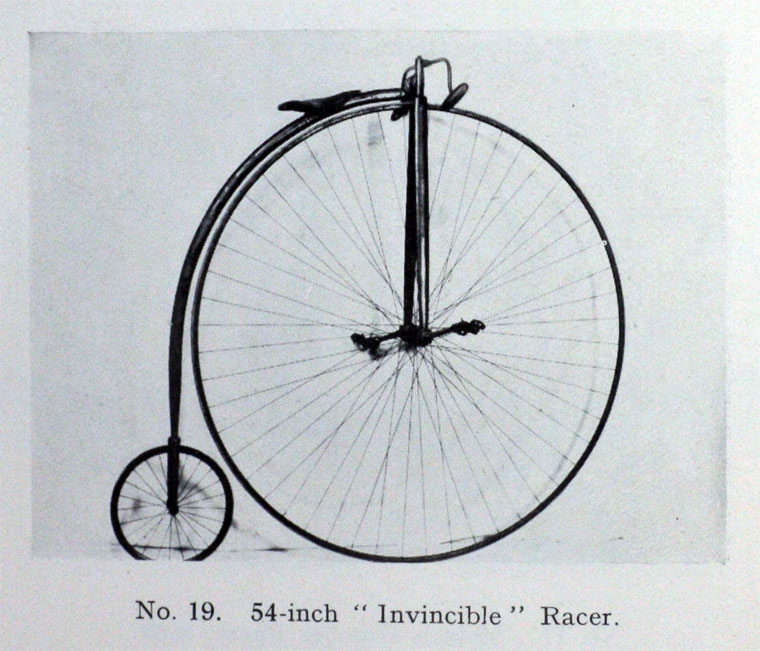 1878 Bankruptcy. '...Liquidation by Arrangement or Composition with Creditors, instituted by John Samuel Smith, of 87, Blackman-street, Borough, in the county of Surrey, trading there under the style or firm of Smith and Company, as an Indiarubber and Guttapercha Manufacturer, also carrying on business at 85, Blackman-street, Borough aforesaid, as a Bicycle Manufacturer and as the Surrey Machinist Company...'[1]

1885 Award at the Invention Exhibition for cycles

This is one of the lightest 'ordinaries' ever built, its actual weight being 22 lbs. Indeed the previous owner, A. J. Dicks, considered it too light for serious riding, and exchanged it with me for a heavier bicycle. The spoking system is worth noting: each length of wire makes two spokes, being threaded through the hub-flange with a Z bend: this was not good engineering, as, if one spoke broke, its companion was liable to become loose. Incidentally, an almost identical system was introduced more than 40 years later by another London maker, who claimed that it was not only an improvement on the usual system, but a "novelty".

With this exhibit is a letter from Mr. J. S. Smith, proprietor of the Surrey Machinist Co., who writes:—

"I am pleased to have the opportunity of seeing one of my old 'Invincible' light racers, made by me in my works, at that time in Blackman Street, Borough. This model was one of the most successful record breakers of the period. The great H. L. Cortis used a similar mount when he made the record of 20 miles in one hour, and most of the giants of cycling who followed him, including F. J. Osmond, H. A. Speechly, E. M. Mayes, J. S. Whatton, and many others, rode the 'Invincible' to victory!"

Mr. Smith himself was a tricyclist of some renown, winning an open 50 miles road handicap promoted by the Catford C.C. in August 1887: he received 75 minutes start from G. P. Mills, and his time was 3 hours 30 minutes. The certificate awarded to him adorns the wall of the museum. Mills, on a bicycle, did 2 hours 54 minutes 14 seconds. With his wife, Mr. Smith made a famous tandem pair, and Mrs. Smith enjoys the unique distinction of being the only lady in the world to hold a medal for beating records; at the old Crystal Palace cinder track, in 1887, they beat world's amateur records at 21, 22, 23, 24, and 25 miles, (1 hour 20 minutes 6 seconds) and 1 hour.

Mrs. Smith assisted her husband in his cycle making business; she never raced on a single tricycle or bicycle, and never on a tandem except in partnership with Mr. Smith. 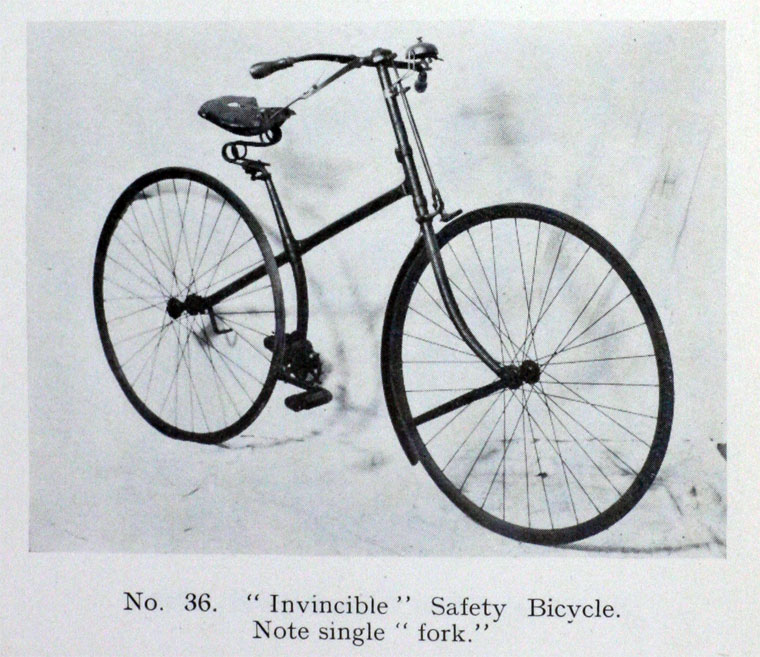 Note the single “fork " to both back and front wheels, the wheel spindle being supported at one end only: also the ball head, an unusual feature in 1889. There are no chain-stays. The 'eccentric' method provided for adjusting the chain is worth inspection. Weight 40.25 lbs. Purchased in Holloway, N. London. A letter from J. S. Smith accompanies the exhibit.

The word “fork" is obviously incorrect when used to describe a device having only one "prong"; but from time immemorial cyclists have used it in connection with machines having their wheel spindles held to the frame at only one end. The principle is very old, but, like other features of cycle construction, it recurs at intervals in the history of the bicycle, each “inventor" thinking that he has evolved something new.

As a mechanical device it may even be older than the bicycle. The first instance of its use in cycle construction occurs on James Starley's lady's “Ariel” bicycle of 1872.

A few years later it was used by J. Keen on his popular racing 'ordinaries'; J. S. Smith fitted single forks (?) to his 'Invincible', 'ordinaries,' 'safeties,' and tandem tricycles, and (to show that the ancient plan appeals to modern designers) the BSA three-wheeled motor-car of 1931 has its single rear wheel held to the frame at one side only! [3]

1895 Sale of premises and equipment. '...The leasehold premises and warehouse situate at 128 and 129 Gt. Suffolk-street Boro' London held for the unexpired residue of a term of 21 years from the 25th March 1891 at a rental of £210 per annum determinable at the lessees option at the end of the 7th or 14th year with the goodwill of the business of the Surrey Machinists' Company Limited together with the machinery plant and tools including a 6-horse power Stockport gas engine with tank silencer &c. 100ft. of 2in. diar. shafting with hangers and bearings and 22 pulleys about 300 feet of leather belting three portable forges two brazing fires, bicycle rim rolling machine, enamelling and polishing plant, drilling, wheel cutting and punching machines and all the usual appliances for cycle manufacture and office furniture....'[4]