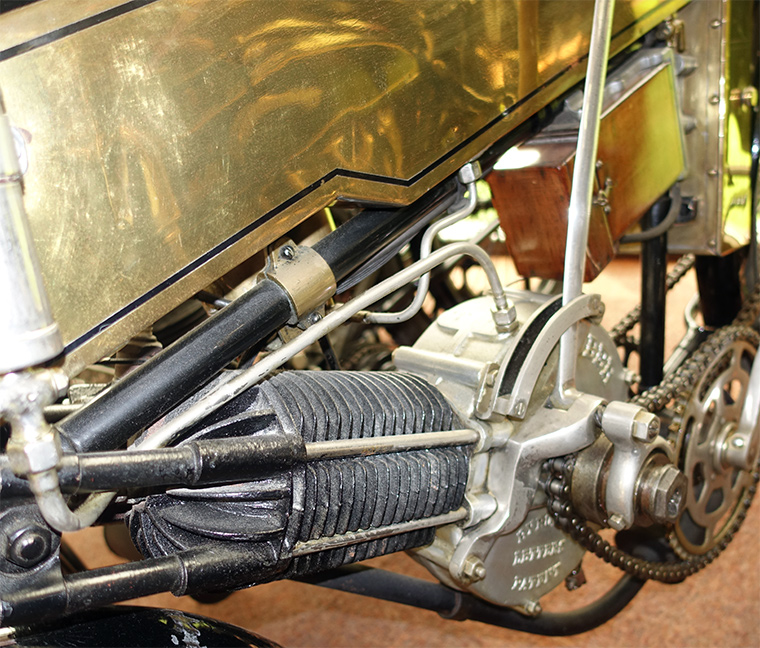 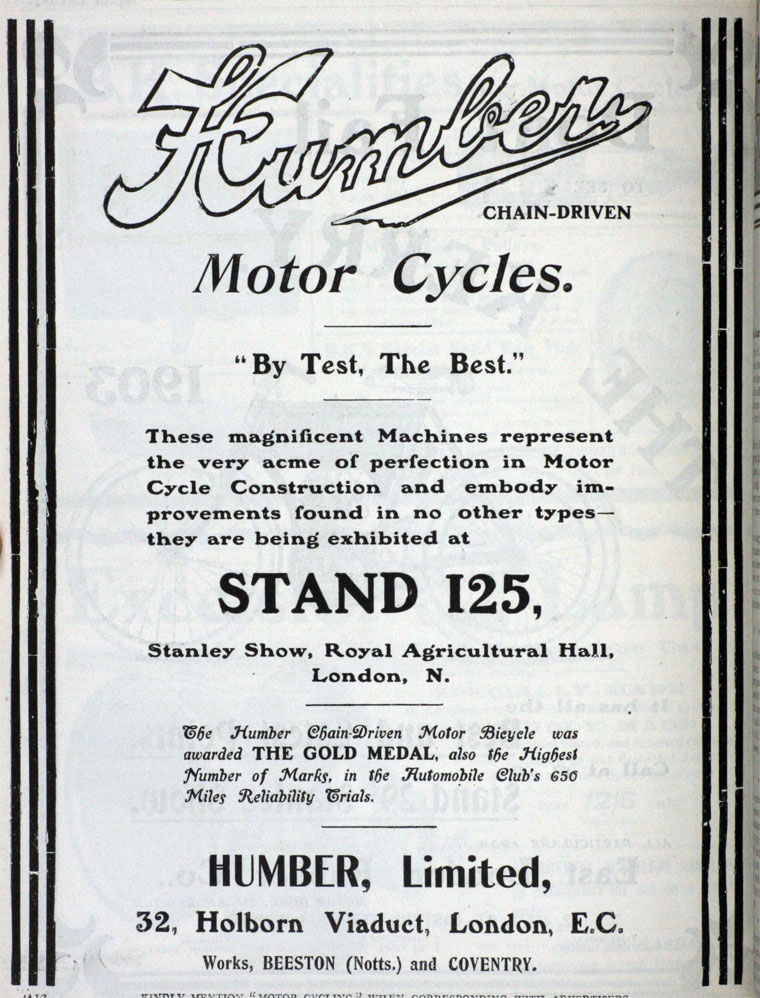 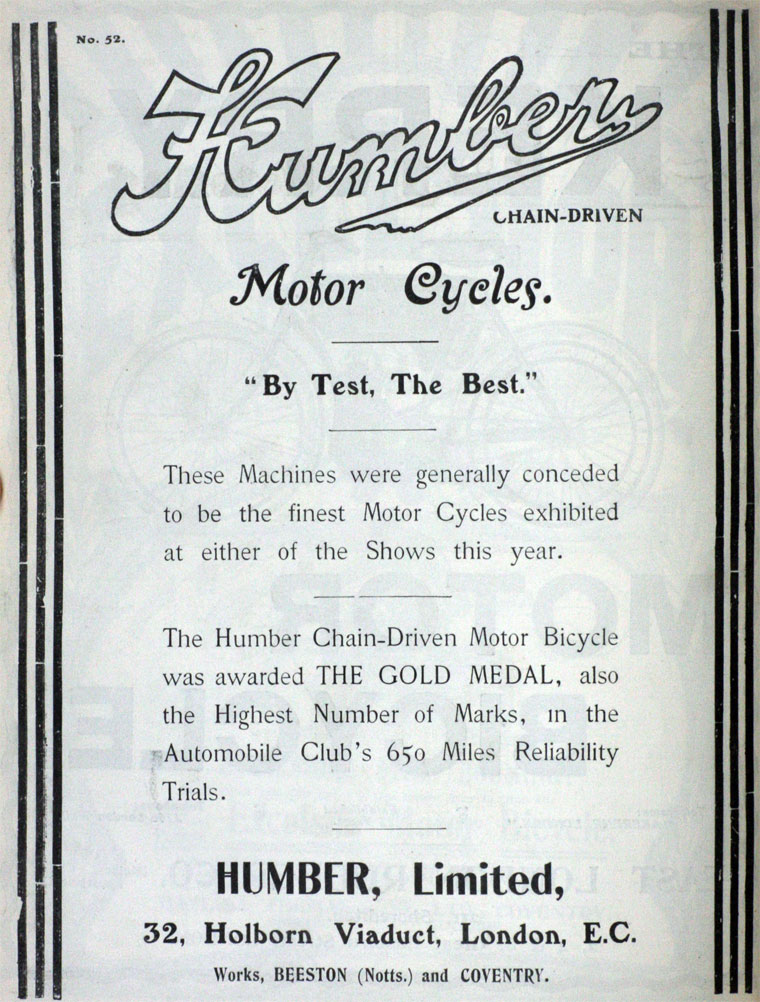 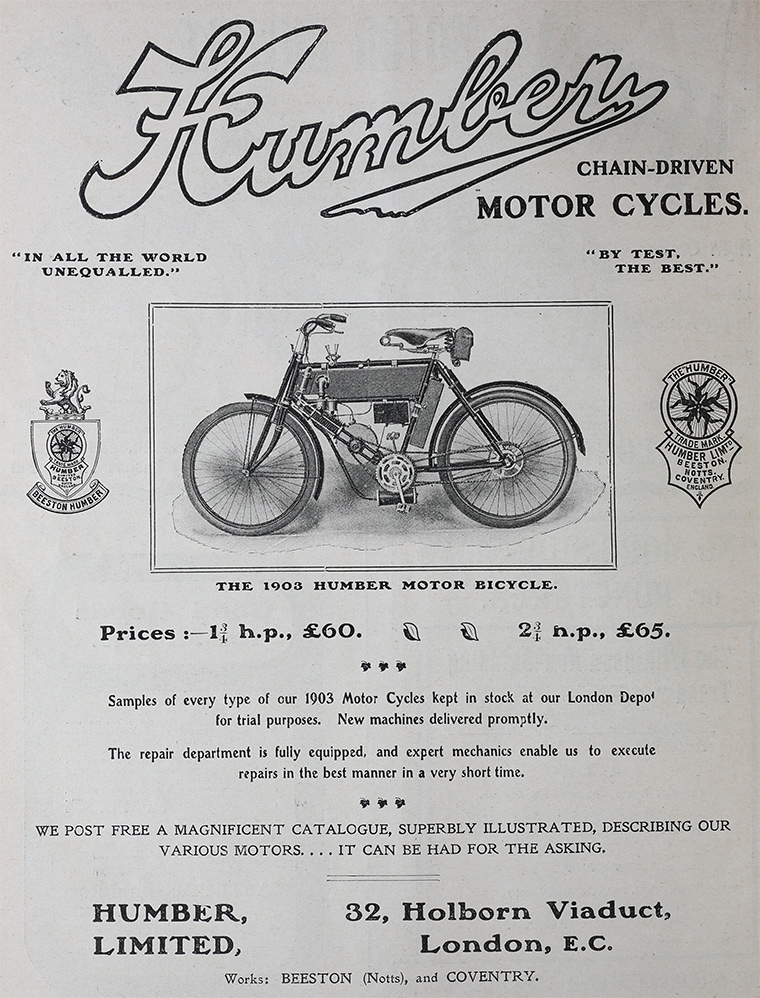 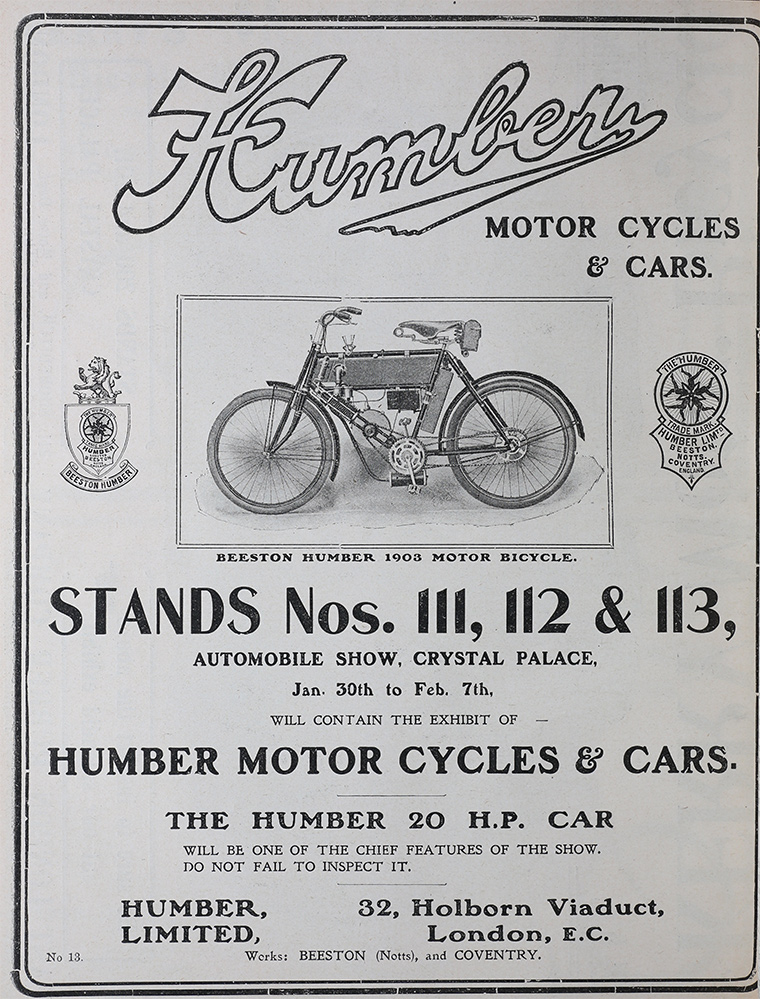 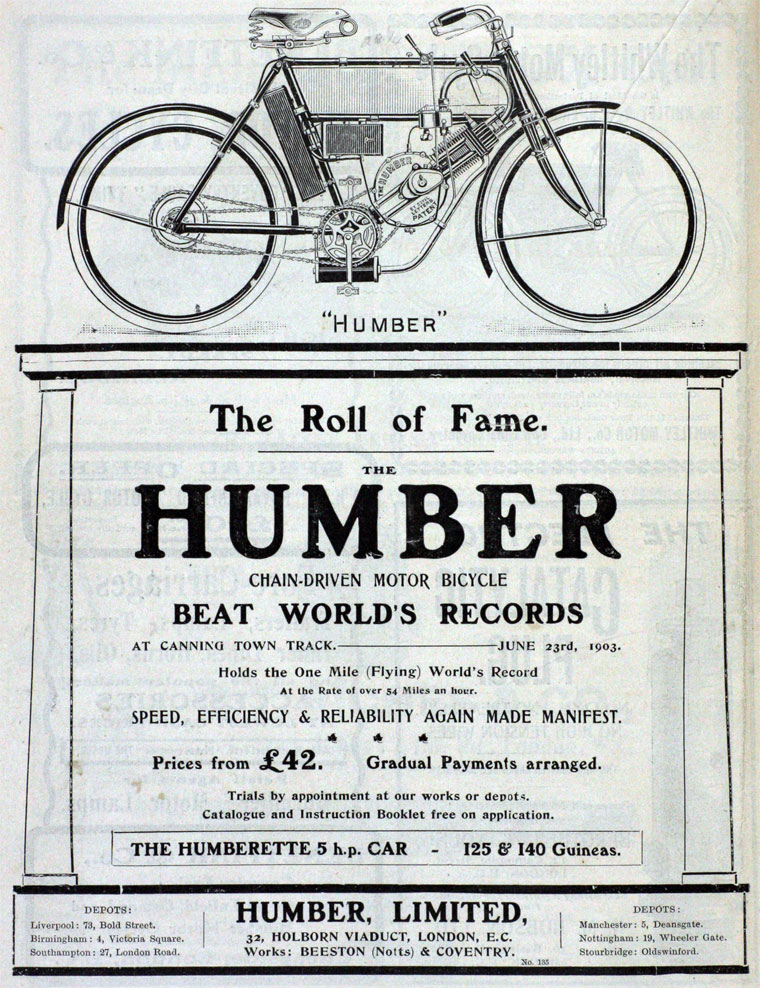 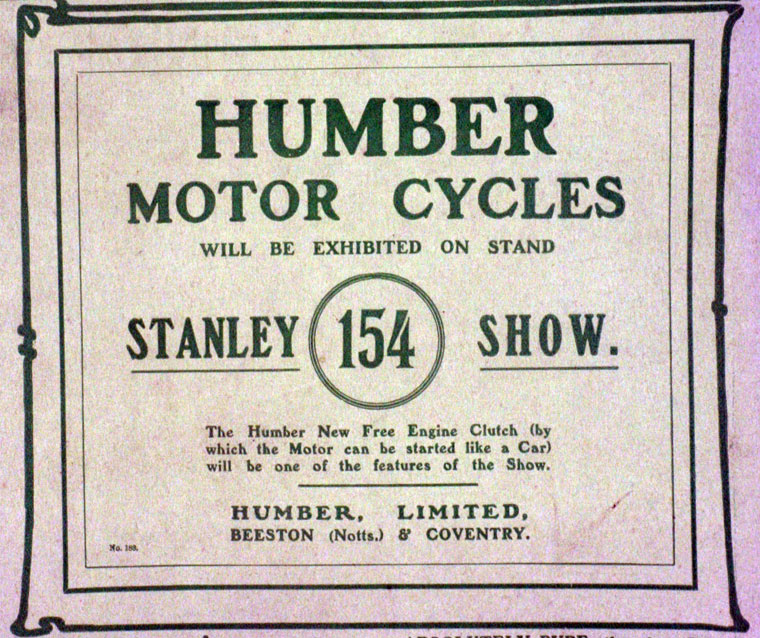 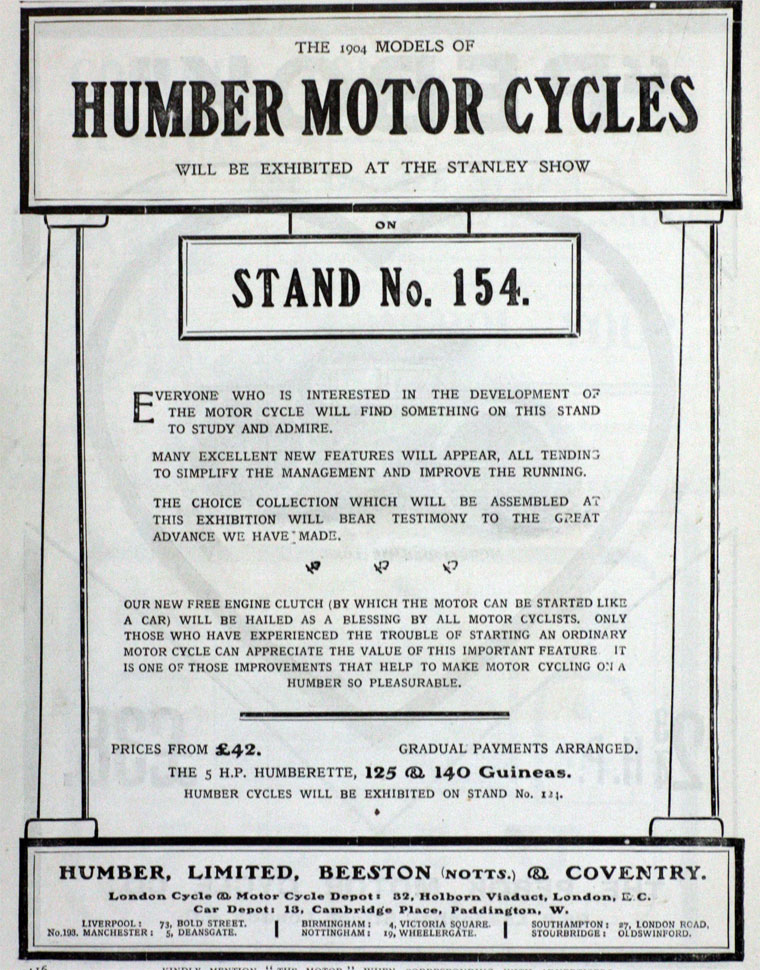 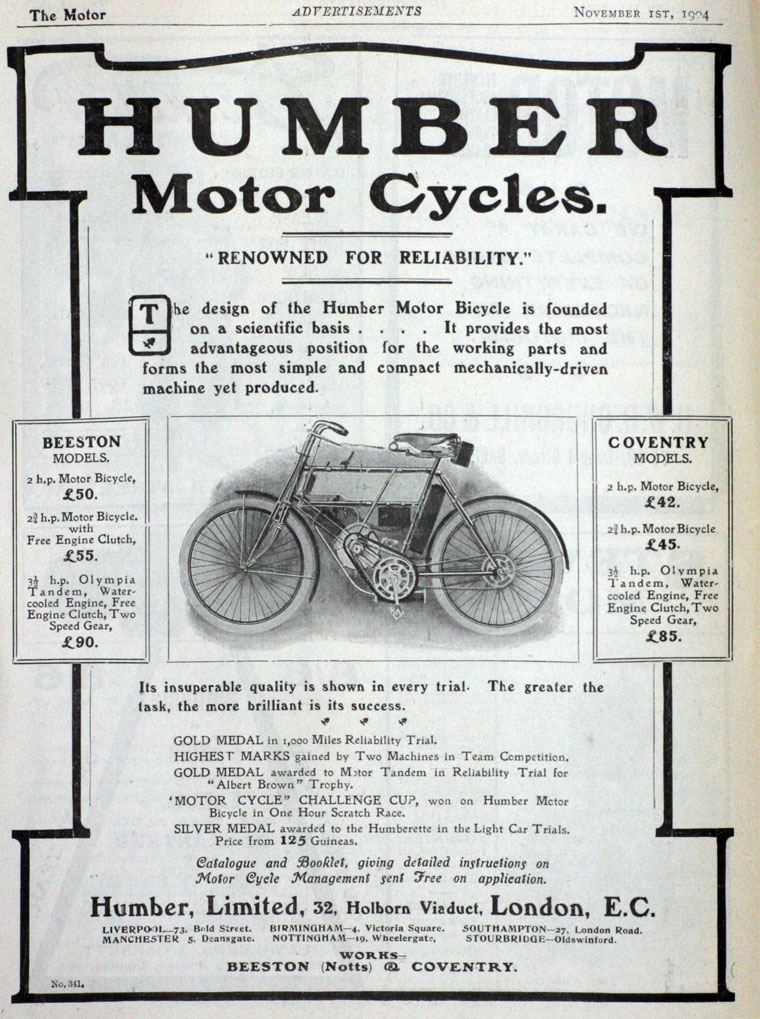 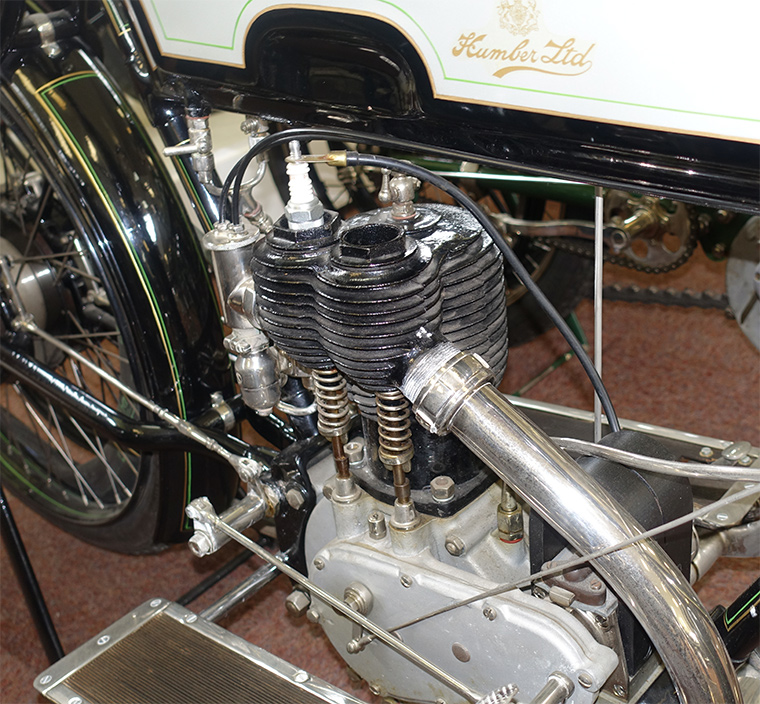 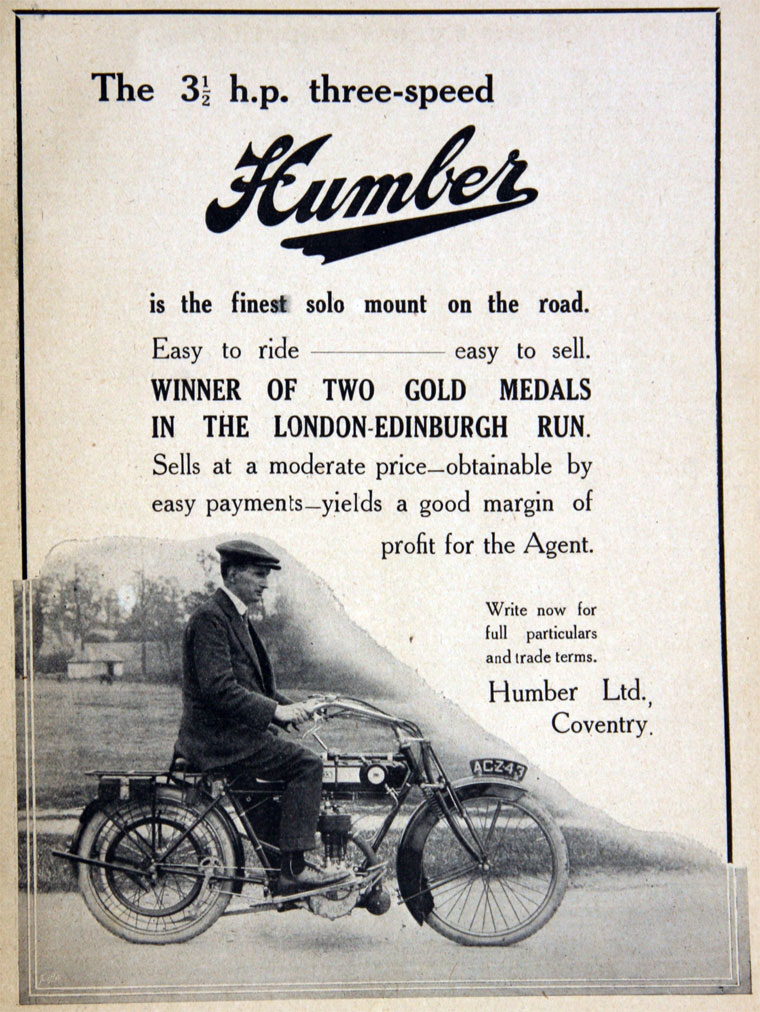 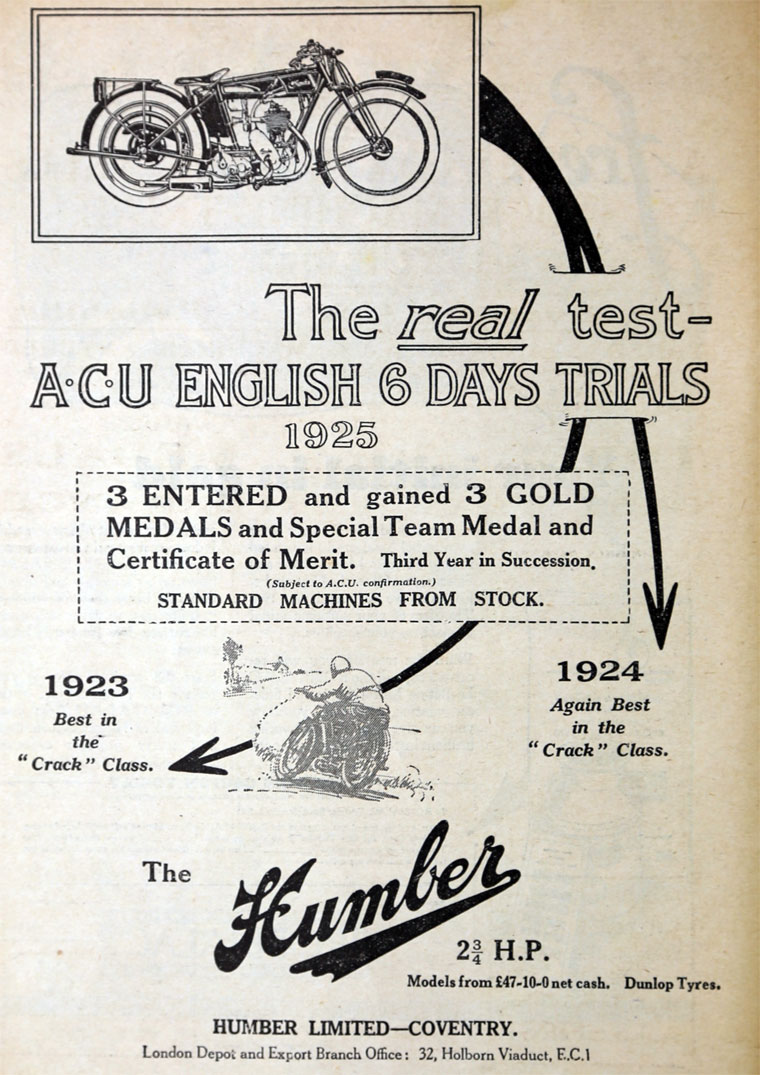 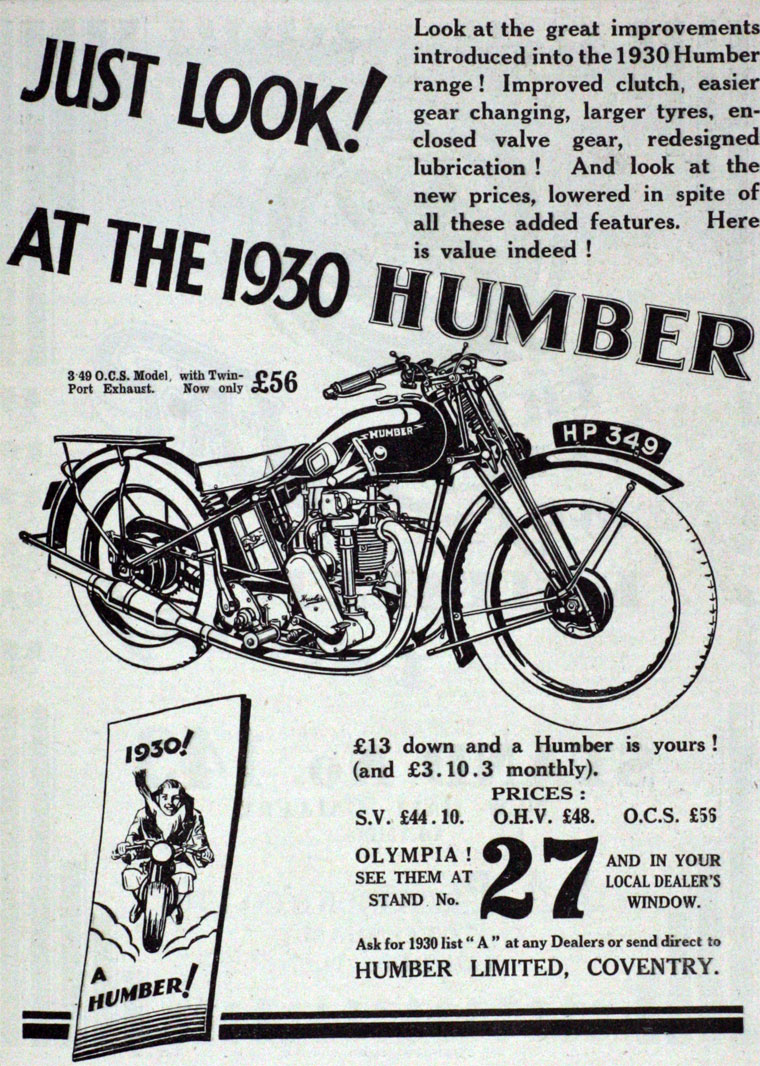 Note: This is a sub-section of Humber

1896 The company started experimenting with powered machines, working with entrepreneur Harry Lawson, who had the rights to build the De Dion engine, in Coventry.

1896 At the 1896 Horseless Carriages Exhibition Humber showed 'motor cycles fitted with the Kane Pennington motors and two tandem safeties with the twin-cylinder motors boomed out at the rear'. [1]

1896 'The first practical motorcycle built in this country was completed last week when Humber and Co finished a bicycle fitted with a Pennington two-horsepower motor made at their works in Coventry'. [2]

1896 Developed a small 3hp engine which he attached to his bicycle frame; this made Humber the first motor cycle producer in Britain. Also in 1896 Humber started to assemble the first prototype motorcar in newly constructed premises in Coventry, which resulted in a production of nine vehicles for the Stanley cycle show in London - the first series production cars in England[3].

1898 Lawson also had the rights to De Dion's tricycle, which Humber made for him.

1898 The company first constructed a power tandem, driven by a battery powered electric motor. Although its life was short, it proved to be useful on racing tracks where it was used for cycle pacing. A ladies' bicycle, modified to carry an engine behind the seat tube, was also produced, along with a forecar known as the Olympia Tandem. This was based on the Pennington design, with the engine hung behind the rear wheel. None of the above models were produced beyond 1899.

1902 Humber became a serious contender in the field of powered transport and two models were produced. Both were very successful and proved their worthiness at shows and in trials. The smaller used a 1.5 h.p. engine hung from the down-tube with belt drive, the larger 2 h.p. model was made under licence from Phelon and Moore, so had the engine fitted as the frame downtube. From there it drove the rear wheel by chain in two stages. These were raced in competition by the work's riders J. F. Crundall and Bert Yates.

1903 The success of the two previous models led on to the development of new machines. All had chain drive and comprised 1.75-hp and 2.75-hp solos, a 2.75-hp tricar with single front-wheel, and the Olympia Tandem forecar. All were listed in two forms, the 'Beeston' or the cheaper 'Coventry', as was Humber's bicycle practice.

1904 The tricycle was dropped, the smaller model became 2-hp and the Olympia was fitted with a 3.5-hp water-cooled engine.

1905 By now most efforts were going into the production of Humber cars, so motorcycles were temporarily dropped.

1909 The name returned with just one 3.5-hp model of conventional form with belt drive and the option of a two-speed rear hub. An unusual addition was a silencer that formed part of the frame downtube, and sprung front-forks with blades that pivoted on a bearing in the lower crown against springs.

1910 Normal silencers and Druid forks made a return, the firm added a new 2-hp model in both lightweight and ladies' variations and also entered the TT.

1911 Humber produced a striking new 2.75 V-twin model of 339cc. The engine was unusual in having a master connecting-rod to which the second rod hinged. The Bosch magneto was gear driven and clamped to the rear of the crankcase, the carburettor B and B, and Druid forks used. It performed particularly well on its debut at the TT - with all six entries finishing and a win.

1913 An unusual design appeared with a horizontally opposed three-cylinder engine - one 373cc cylinder faced forward and the other two of 185cc cylinders, with a common combustion chamber, faced aft. The crankcase was formed to take the two rear-rods either side of the front one, there was a large external flywheel and the magneto sat on top of the crankcase. This very strange engine drove a car-type three-speed gearbox by chain with chain final-drive. Only one small batch of this model was ever produced.

WWI During World War 1, they made sidecar outfits for the war effort.

1914 All continued much the same for the next couple of years, with the addition of a water-cooled version of the 3.5-hp model, intended for sidecar work.

1915 Only the 3.5-hp single remained in production and the 3-hp was replaced by a conventional 6-hp water-cooled flat-twin driving a three-speed gearbox with chain final-drive.

1916 Only flat-twins were built, with the 6-hp model joined by an air-cooled 3.5-hp model, also with three speeds and chain drive. Few of these machines were produced.

Post World War I. The 6-hp twin was dropped, while the 3.5-hp flat-twin was first joined and then replaced by a 4.5-hp version of 601cc. Various other models were produced, modified or dropped, including a sports model, a 349cc sv single, an ohv model, and a neat ohc version with shaft and bevel drive, rear magneto and the oil pump driven from the camshaft end. This trend continued until the end of the 1920s.

1923 In came a 2.75-hp lightweight sports model powered by a single cylinder side valve engine of 349cc. Refined and speedy, the newcomer proved good enough to secure Humber the Team Prize in the ACU (Auto-Cycle Union) Six Days Trial, and would remain in production until Humber ceased motorcycle manufacture.

In 1927 they announced a 350cc ohc machine, but it was not successful.

1931 Sales slumped and the company had left motorcycling to concentrate on cars. Their bicycle business was sold to Raleigh.