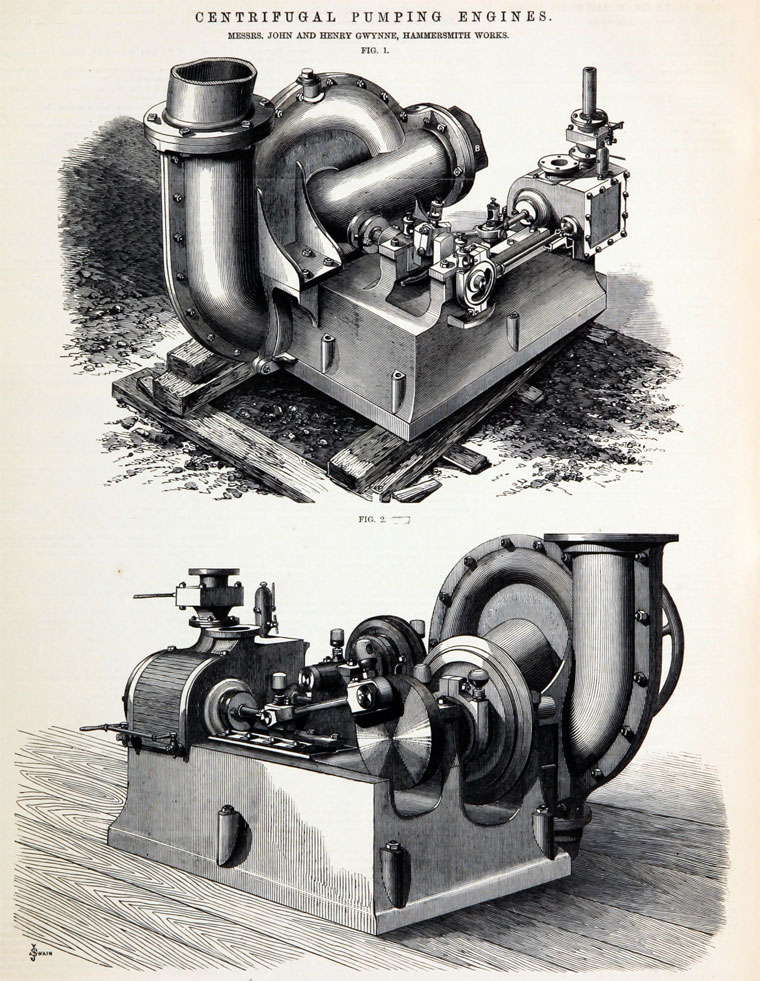 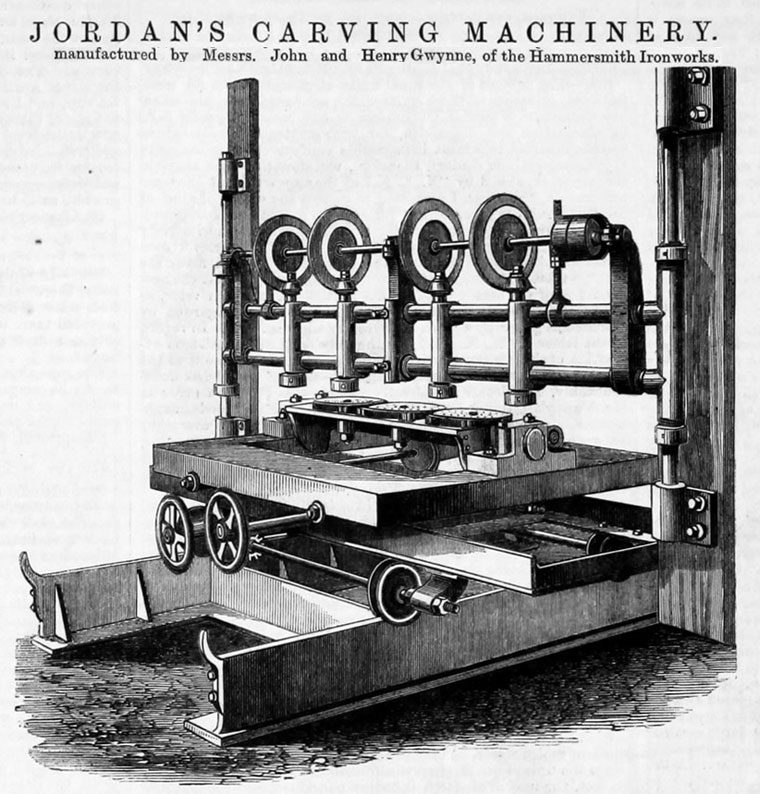 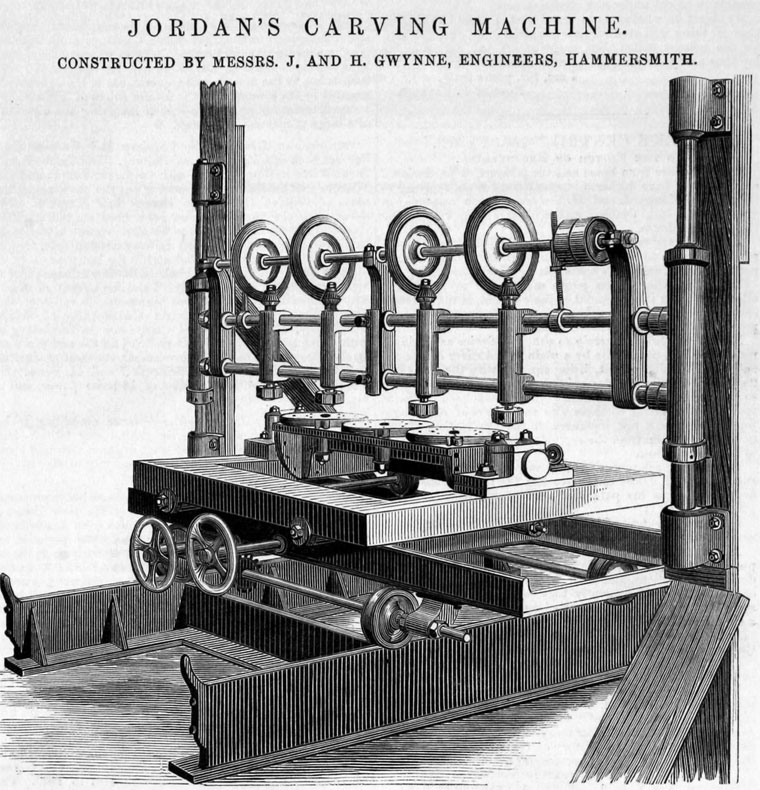 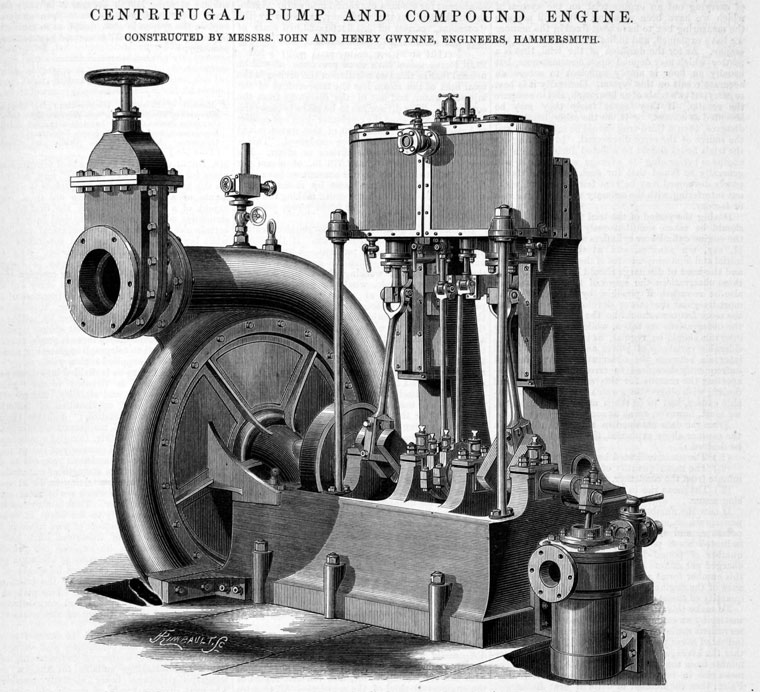 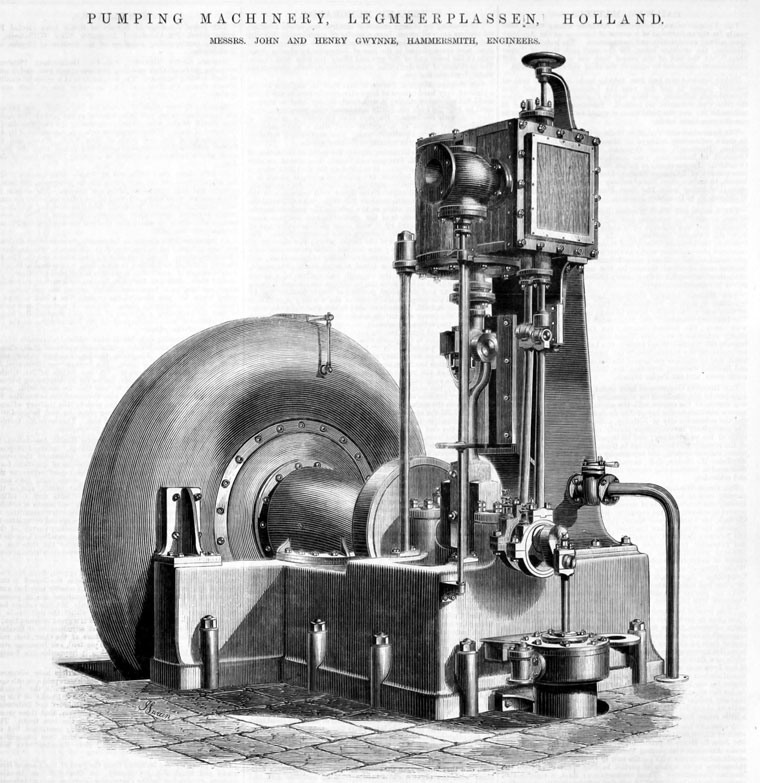 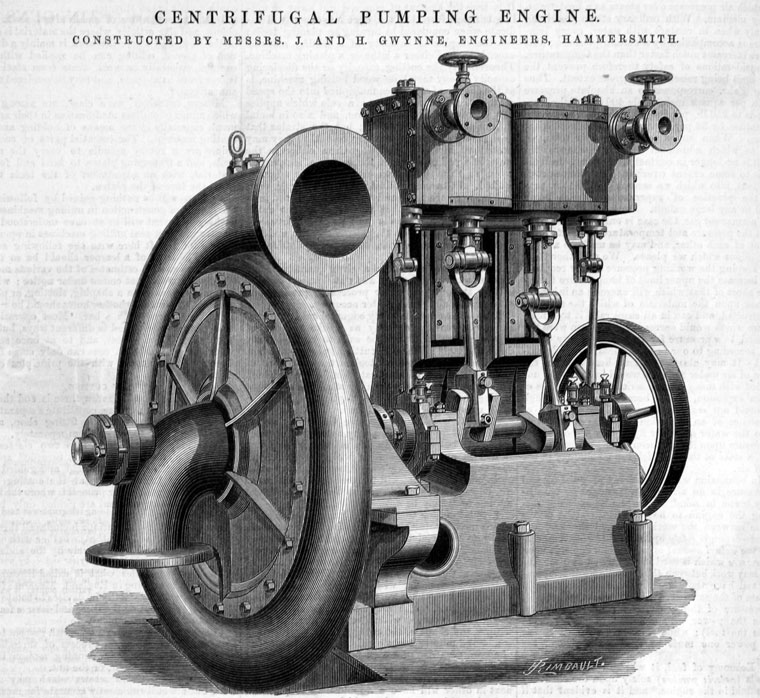 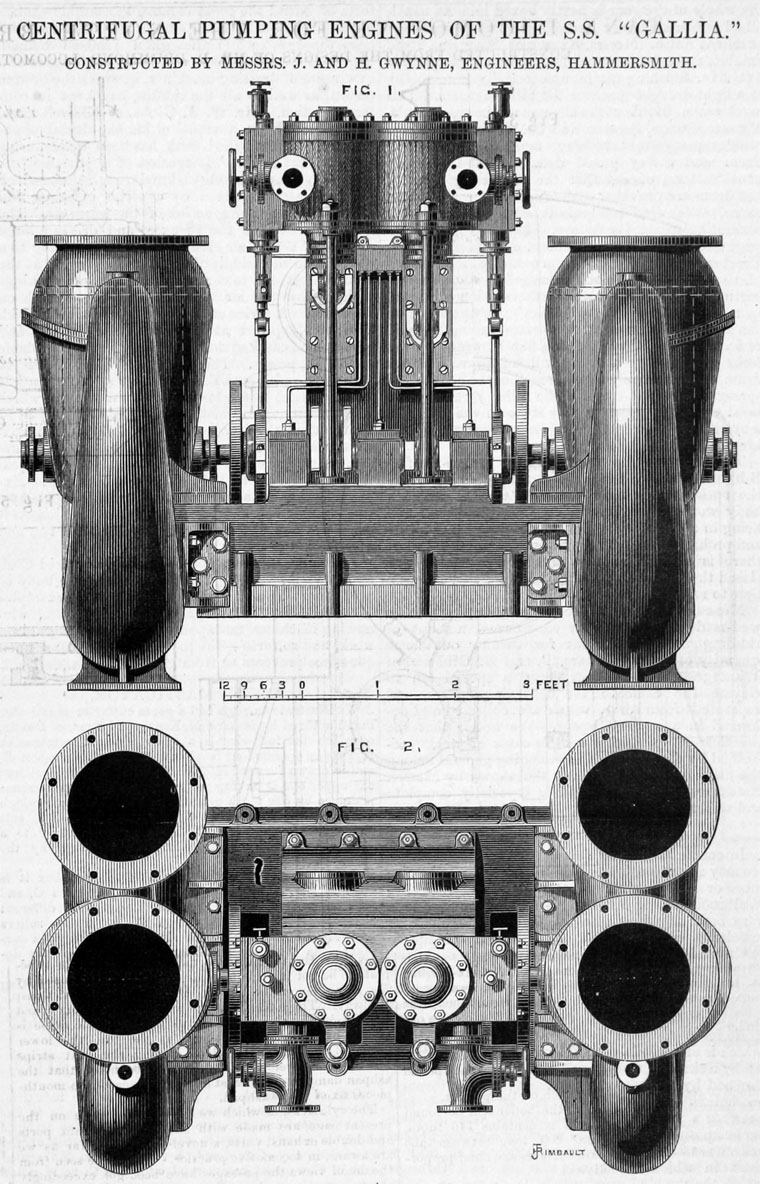 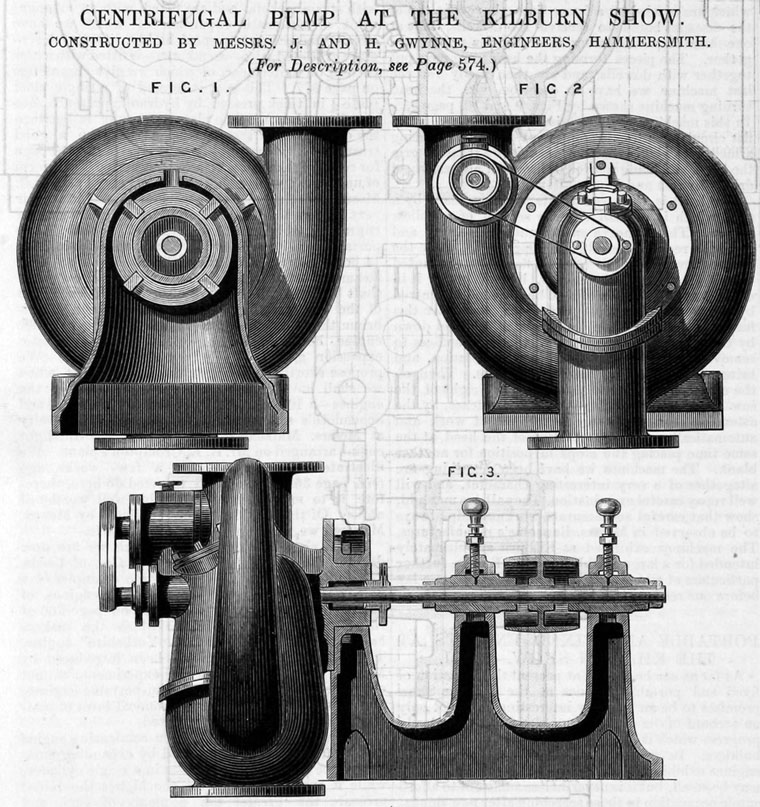 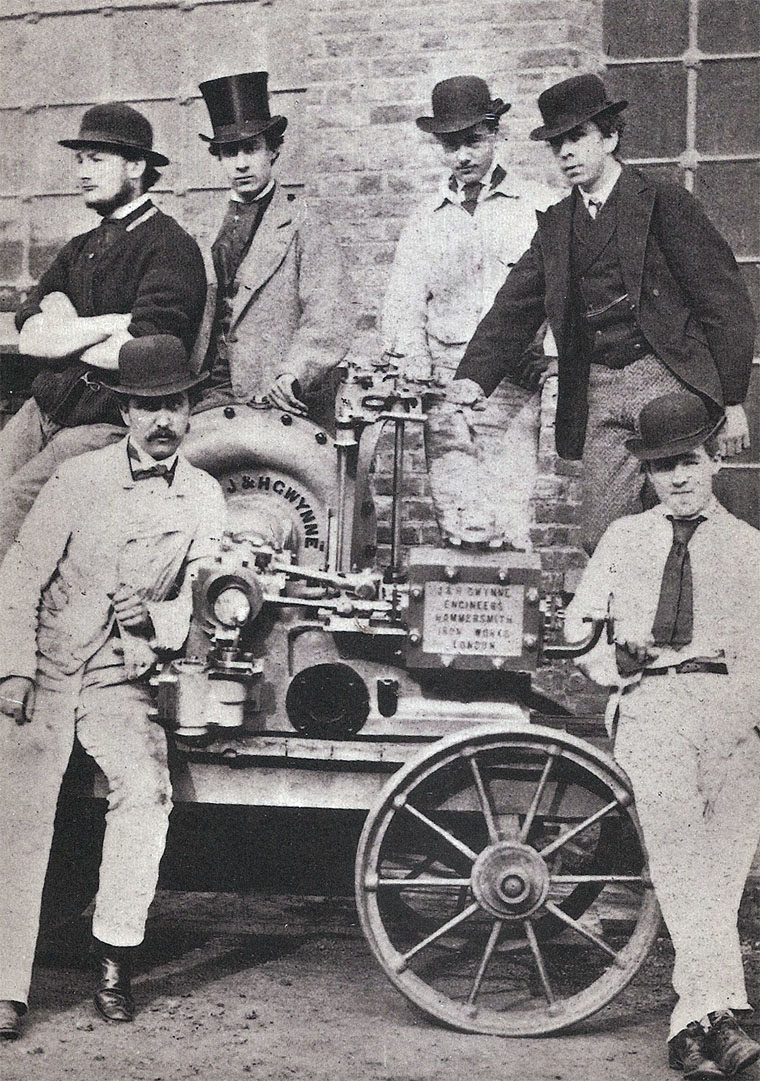 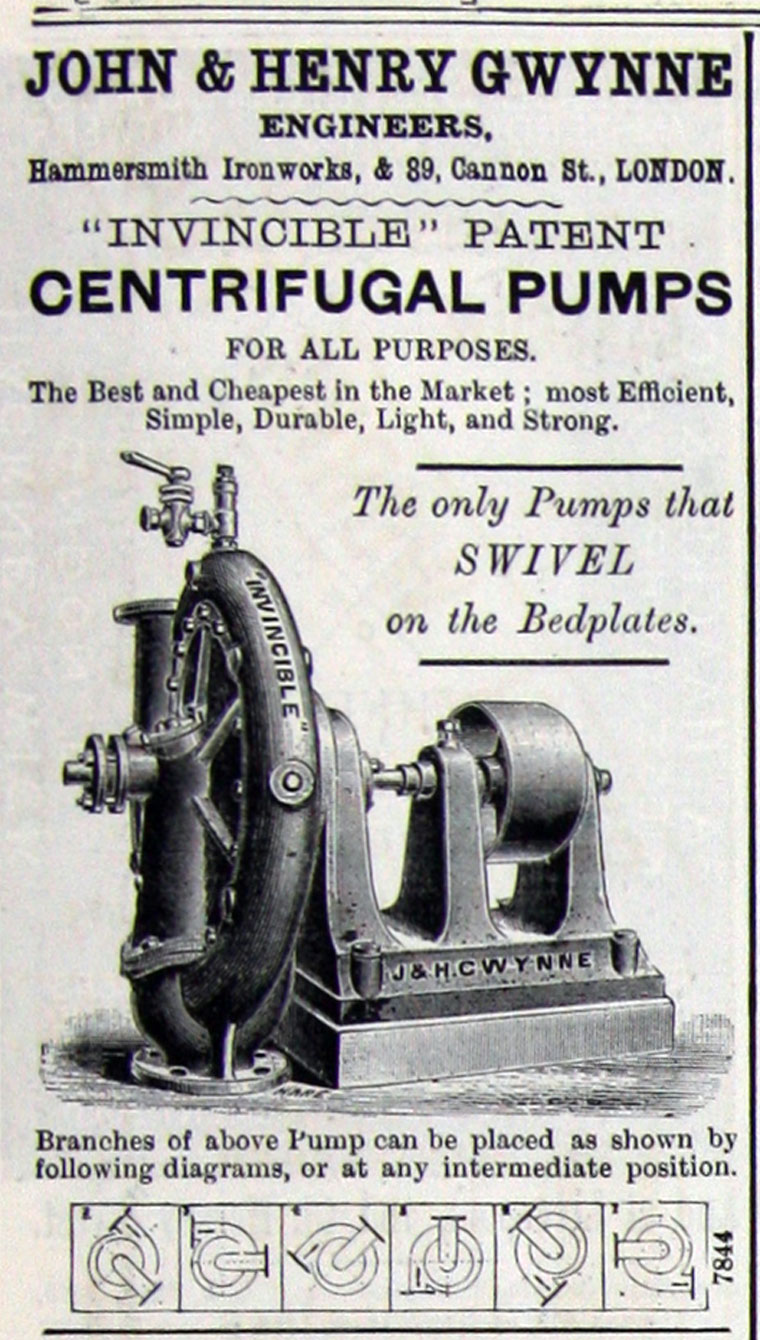 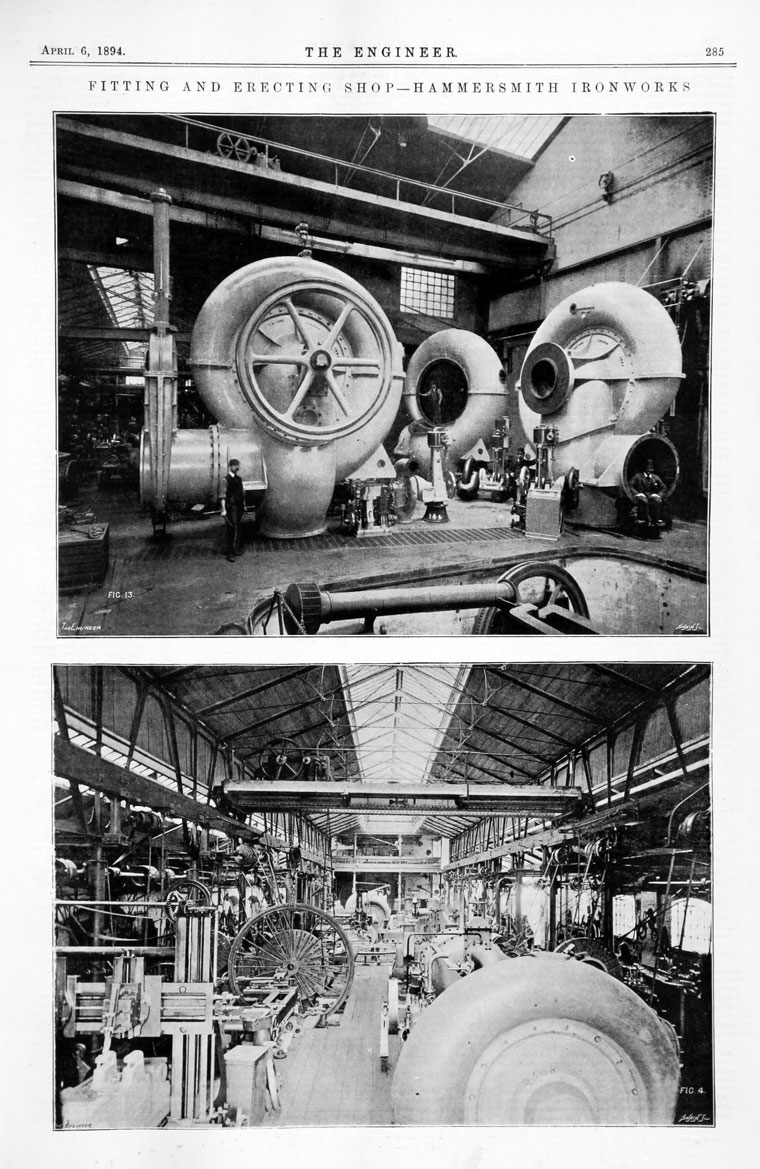 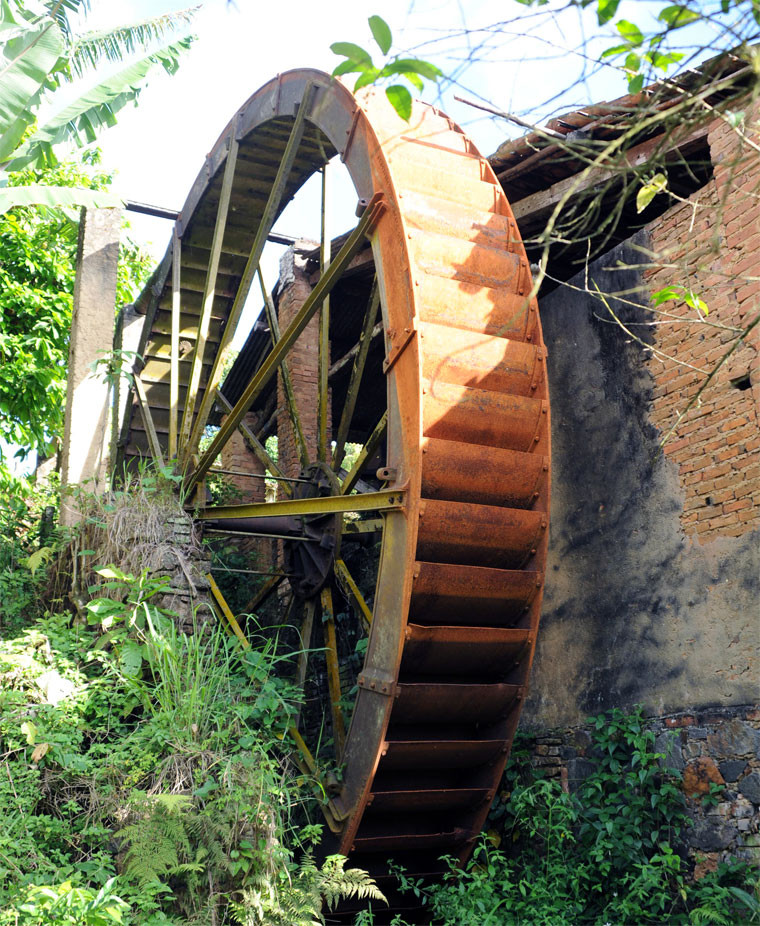 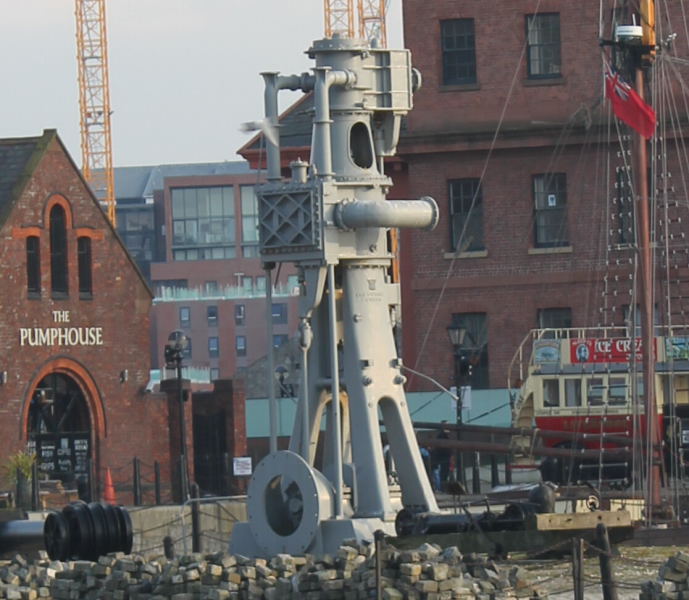 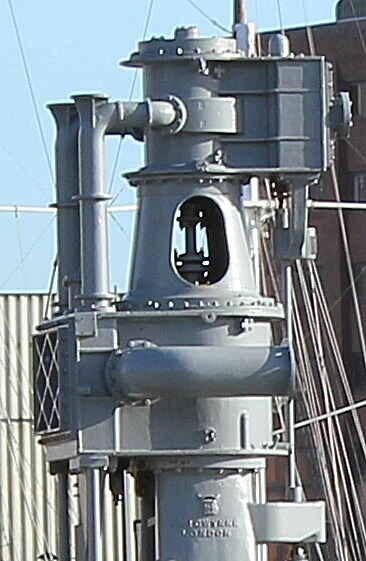 Closer view of engine at Liverpool

John and Henry Gwynne, of Hammersmith and 89 Cannon Street, EC

1867 The brothers John Gwynne and Henry A. Gwynne founded the Hammersmith Iron Works for the manufacture of centrifugal pumping machinery, under the style of J. and H. Gwynne[1]

Made examples of 'Jordan's Carving Machine', a vertical milling machine for producing decorative panels. They were used for producing carvings for the Houses of Parliament. Five of the machines had passed on to George Trollope and Sons.[2]. See illustration.

1882 Ironfounders, hydraulic machine makers, marine engineers, boiler makers; "makers of the largest pumping machinery in the world"; John Gwynne was a civil engineer (M.Inst.C.E. and other institutions)[6]. At this time, one of his brothers, James Eglinton Anderson Gwynne, was running a separate company: Gwynne and Co.

1886 Installed pumps at Sandon Dock, Liverpool: 'DEEPENING THE SANDON, DOCK. At the close of the proceedings, the members of the board, by invitation of the chairman, proceeded to the Sandon Dock for the purpose of inspecting the pumping arrangements for increasing the depth of water in the dock, of which the engineering gave the following description:-

The object of these pumps is twofold-
1. To provide power to increase the depth of water within the Sandon Dock and over the graving dock sills at low neap tides, when vessels, under existing conditions, are prevented entering the graving docks for lack of water over the sills. 2. To improve the existing system of drying the Sandon Graving Docks and the Huskisson Lock, the old appliances having become obsolete and worn out. These objects are attained by means of five centrifugal pumps, known as the "Invincible," patented by Messrs. J. and H. Gwynne, of Hammersmith Ironworks, by whom they were constructed and erected. Four of the five pumps are of large size, having fans 60 inches and suction pipes 36 inches in diameter, the extreme dimensions of the pump castings being about13 feet; these deal with the raising of the water in the Sandon Dock. They are driven direct by four independent simple high-pressure engines, with cylinders 21½ inches diameter and 2 feet stroke, designed to run at 160 revolutions per minute, equal to 640 feet per minute. In addition to the large pumps, a small drainage engine and pump of the same type is provided to deal with leakage from the graving docks. This is designed to run at 300 revolutions per minute, and has a suction pipe 15 inches diameter. The boilers are four in number, of the Lancashire type, 26 feet long by 7 feet diameter; the working steam pressure being 85tbh. At a trial made on the 7th January it was found that the maximum combined discharge of the pumps per minute was 17,969 cubic feet = 112,305 gallons = 1,150,016lbs. = 513 tons. The total quantity delivered in three hours into the Sandon Dock (the area of which is over 10 acres) was 1,995,705 cubic feet, through an average lift of 8ft 5in, the engines averaging 116 revolutions. The specified conditions were that they should deliver 2,613,750 cubic feet through an average lift of 5ft. 3in. in the same time. The performance of the engines is estimated to have exceeded the requirements by about 14 per cent. The arrangements were considered highly satisfactory.'[7]

1897 Public company registered as J. and H. Gwynne Ltd, to take over the business of engineers of the same name, of Hammersmith and 89 Cannon Street, EC[8].

1901 Introduced the Invincible four-cycle vertical oil engine in sizes from 2.5 to 25 hp for single cylinders and 32, 40 and 50 hp in twin-cylinder form

1901 Erected a barge lift at Foxton, Leicestershire on the Grand Junction Canal [9]

1903 Depressed state of trade had continued, as described at the previous year's general meeting. In process of taking over the company's close competitor Gwynne and Co; that company had belonged to the brother of the chairman, James Gwynne, whose son Neville had been manager for several years lately. The business and machines would be transferred from premises in Brooke Street to Hammersmith. This would reduce competition and strengthen the business[10]. The name of the company was changed to Gwynnes Ltd.